In Honor Of Heroes

The world needs heroes right now.  And today is an important anniversary for some great national heroes.  It was 70 years ago today that the legendary Battle of Bastogne ended.  Fought from December 20th - 27th, 1944, it was part of the historic Battle of the Bulge. 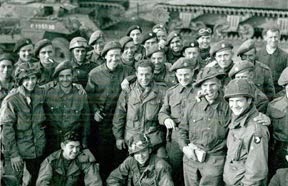 I just finished re-watching the HBO miniseries Band of Brothers.  I am always overcome with emotion and pride that this group of average American men (some barely more than boys) endured the hell of war in a courageous battle against Evil.  While I believe all wars are fought with ulterior motives of Power and Financial Gain, this may be one in which there is no question that Satan was at the helm.
At this particular time during WWII, Easy Company, part of the 101st Airborne Division, were tasked with holding the line at Bastogne against superior German artillery fire.  They accomplished their mission without winter clothing and with limited rations and ammunition.  I think, of the 10 episodes of the globally successful miniseries, the one titled "Bastogne" was the hardest to watch.
But it wasn't hard to get attached to the characters in Band of Brothers.  They became an extraordinary group of battle-hardened veterans.  The men of Easy Company began as part of an experimental airborne regiment created in 1942 at Camp Toccoa, Georgia. Easy Company missions were to involve being parachuted from C-47 transport airplanes over hostile territory (Wikipedia).  They accomplished that directive as part of Operation Overlord, on D-Day.
As one follows them through their battles in the Netherlands, the ill-fated Operation Market Garden, and on into Belgium, you cannot help but mourn the loss of each soldier.  They are no longer simply names, but real people with real stories of what war was like at close range.  As miserable and wretched as the miniseries portrayed those days and nights in the Ardennes forest near Bastogne, I doubt that it comes close to what those men actually experienced.
But let me share a bit of the history from one man who was there, Colonel Edward Shames:  "[On the evening of December 17, 1944] we ended up in a 10-ton open tractor-trailer truck without a top, freezing our tails off. We had no ammo, no good clothing, and ended up in a place that we had no idea where it was. Some of the men even had no weapons, unbelievable, but very true. We thought we were cold that night, but we did not know that ride would become a Sunday excursion compared to what we were to experience later that month. 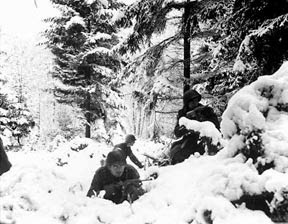 When we offloaded the trucks that morning, I do not believe there was a single man that had the foggiest notion as to where we were. It was cold as hell, and very foggy. We saw hordes of our soldiers running towards us down the middle of the road, and watched them throw their weapons and equipment to the ground. They were yelling, Don't go up there! The Germans are going to kill everyone! Run as fast as you can! They are coming, run! These were American soldiers, both officers and men. I repeat, both officers and men. I was never more ashamed of my countrymen than at that moment, before or since. I will never forget that sight as long as I live.
One good thing came about in those moments; we were able to retrieve some equipment, clothing, and ammo from what was being discarded, and there was a ton of it scattered all over the area. This material was being thrown away to lighten the load of these people, these hysterical people, so they could run faster. I refused to call them soldiers. As I recall, it was fairly early in the morning, and very foggy. You could hardly see more than 100 feet in front of you, if that. It was cold as hell, as I said before, and the enemy was very close; we felt it in our bones."
The Facebook page for Easy Company, 506th Paratroopers Infantry Regiment of the 101at Airborne Division, gives this account:  Bastogne was to become the key to the battle. Control of its network of roads and railway systems was a critical and highly sought after military objective by both the Americans and the Germans. By the dreadful night of the 20th of December, the 101st Airborne found themselves completely surrounded at the besieged town of Bastogne along with the 705th Tank Destroyer Battalion and elements of the 10th Armored Division. The 101st would form a defensive perimeter by digging foxholes into the hard and cold snow around the outskirts of the Bastogne forested area. The 101st held their position and beat back the determined and repeated attacks by overwhelming German forces. The "Battered Bastards of Bastogne" would hold the line.
As we focus on the birth of our Savior, it is hard to reconcile that innocent child with the horrendous headlines proclaiming Evil around the world.  And this event of 70 years ago in a far-off war may seem like just a footnote in history.  But it is precisely because of the reasons those brave men found themselves in that frozen hell, that He came -- to bring Light to a dark world.  But the world refuses to embrace Him.  So just as the world witnessed the wickedness of the Holocaust, we are now observers of the heinous persecutions against Christians, Jews, and other innocents by a murderous horde of barbarians.  The peace that came after the "War that was to end all wars" only lasted 70 years.  Our hope now lies in the faith that our Savior will return to end this Evil for all time.  Until that happens, we can look upon the remarkable bravery of a small band of men who stood against the evil of their time, and did their part to stand in the gap.  We can celebrate the extraordinary actions of ordinary men, and honor their memory.  I honor the lives of the 18 surviving members of Easy Company, and the memories of their fallen brothers, on this, their 70th anniversary of "holding the line".  We salute you!