It is difficult to write about Ferguson, Missouri today.  Whether I agree with the decision of the Grand Jury to not indict Officer Darren Wilson in the death of Michael Brown; it is not what I want to focus on.  Uppermost on my mind is how easy it seems for everyone in the media to "understand" why the rioting and the looting and the burning has taken place the last two nights.
Not only that, but no one seems to want to consider the difficult position in which both the members of the Grand Jury and the witnesses found themselves.  They were all citizens who lived in that community, and they should be applauded for their courage in rendering a decision that everyone knew would be unpopular.  Long after the outside agitators and out-of-town demonstrators have returned home, they still have to live there.  They could have made the easy decision, and avoided the destruction of their neighborhood; but they did the right thing and upheld the Rule of Law.

If you listen to everyone from the President, to Al Sharpton, to Rosie O'Donnell on The View, to news anchors who are supposed to be impartial, to the protestor on the street ... the only "fair" decision would have been to indict Officer Wilson.  The overriding impression that was broadcast was "the system is broken."  But is it?  Is it only broken if you don't agree with the decision?
It seems to me they are all consumed with the paradigm of "white officer shoots and kills unarmed black youth."  As a society, we need to ask ourselves, is there a pattern here; and is there a legitimate cause for concern?  The answer to both questions would be "yes".  But no one seems to be interested in the reasons why the answer is yes.  What are the underlying reasons and causes that more black youths end up in these situations than young men of other races?  Does anyone consider how many times this situation occurs between black youths and black officers?  Is there a problem with authority among the youth in the black community?  And if so, how are we to ever meet in the middle as long as mutual respect is denied?  Or is it that the racial component of a white officer easily serves the agendas of all involved?  And although there is much talk by all parties about wanting peace, there is no evidence that it is being actively pursued.  (And I'm sorry, Rosie, but I do not see "righteous indignation"; only stealing, vandalism and breaking the law).
When the President of the United States, who is supposed to be the President of all the people, says during a national press conference, "People will be disappointed about this decision, even angry; and that's an understandable reaction...", why are we surprised when protestors take that as permission to act on their anger?  And when he states yesterday, that the feelings and reactions are "rooted in the reality" of what is happening in some black communities, how does that contribute to healing the nation, or resolving the issues that underlie what happened in Ferguson?  He stated that he is concerned that law enforcement be "fair", implying that there is no accountability or responsibility on the part of those who engage with law enforcement.  I agree with you, Mr. President, that Trust is important to bringing about real change -- but Trust is a two-way street, to be entered in by both parties, and both races.
When Al Sharpton says that Monday night's decision by the Grand Jury was a blow to their cause, and that they are ready for "the next round", who is surprised that the protestors view themselves as fighters?  Who is really surprised that violent escalation will be the result?
Everyone keeps talking about "Justice"; all they wanted was "justice for Michael Brown."  But has everyone forgotten that Justice is about Due Process?  It is about fair treatment through the normal judicial system, especially as a citizen's entitlement -- every citizen, including both Officer Wilson and Michael Brown.  And that is the duty of the Grand Jury; to observe the legal order of our Judicial System as prescribed by the Constitution and the Rule of Law.  Can anyone explain to me how the Grand Jury in Ferguson, Missouri did not do exactly that?  It seems to me that what the protestors in Ferguson, national leaders, and biased commentators really wanted was a guaranteed result.
Instead of allowing Due Process to proceed, they seem to have pre-judged this case and the only justice they wanted was that which suited their opinion.  And now that the Grand Jury has determined that Officer Wilson did nothing illegal to warrant an indictment, public opinion wants to declare that justice has not been served; so much so, that the Attorney General of the United States seems poised to file federal criminal charges based on the deprivation of Michael Brown's civil rights... Plan B has been set in motion. 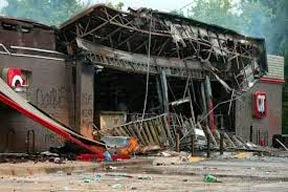 But we need to take a real hard look at what is "feeding the beast".  It is an ugly picture of inflammatory rhetoric, political strategy, and self-serving motivations.  It is about anarchy and mobocracy.  It is about race-baiting, and furthering the racial divide, rather than mending it.  It is about facing the truth of our inner cities and the mentality of aggression and hatred that breeds so insidiously in poverty.  It is asking ourselves if the racial animosity is being distorted and manipulated to tear our country apart.  Protests in over 20 major cities across the land seems to support this premise.
Make no mistake -- the small community of Ferguson became the focal point of outside agitators and subversives who hijacked a local tragedy, and used it for their own purposes.  But when these opportunists have tired of Ferguson and moved on to their next target, the good folks of Ferguson will be left in shambles.  Right now, the senior citizens are afraid to leave their homes; local businesses have been destroyed; and young children are scared to go outside to play.
The only ray of hope I have seen are the Ferguson pastors who took to the microphone to declare that the rioting and looting needs to stop; that we are all children of God; and that any hope of change lies in following His path ... and not in acting in accordance to the misguided, opportunistic tactics of those who would serve to divide us.  Those are the schemes of the devil.

Email ThisBlogThis!Share to TwitterShare to FacebookShare to Pinterest
Labels: Law and Order, Our Culture.