A few weeks back, I listened to a podcast by Paul McGuire, the internationally known prophecy expert and author.  As always, his subject matter fascinated me, but there was one element that I just had to explore on my own.
The heart of Mr. McGuire's expository was how easily we professed Christians can be lured into a sense of defeatism.  He used the story of Joshua and Caleb conquering the land of Canaan, and the difference in how these two heroes of the faith viewed their circumstances as compared to the other spies sent by Moses.  If you carefully read the Scripture, you will see that the 10 spies reported that "We are grasshoppers in their sight", while admitting they couldn't defeat the giants.  Joshua and Caleb, however, were unafraid; as if to say, "They are grasshoppers in our sight", and they counseled swift action and a sure victory.

I found the concept of "occupying our land" very important, and I applaud Mr. McGuire's challenge to his audience to be like Joshua and Caleb, and to believe in God's Divine Power to help us conquer our land.  But, it was while discussing how important Victory is, that he gave a little aside as to how Satan has permeated our own generation with his deceptive practices and signs.  And I was blown away by how this piece of information has important spiritual consequences for us!
Victory is our preferred state, right?  In everything from wars to sports events to social causes -- we want to win!  How many of us equate holding up our fingers in a "V" sign with the symbol for Victory?  It has become a worldwide symbol for triumph and conquest; images of world leaders, religious figures, pop stars, and sports heroes can all be seen displaying the "V" for "Victory" sign.  But do you know its origins, or what its real connotation is?  And do you know who it is signifying as the Conqueror and the Victor?
Now, before you give me the standard argument that it doesn't matter what it used to mean, and we should only consider its modern implication, please consider this:  what if there is a supernatural component to flashing that sign? What if it unleashes a force in the spiritual realm that we are innocently releasing by our action?  The Bible says, "For at the coming of the Lord there will be great activity on the part of Satan, in the form of all kinds of deceptive miracles, signs, and marvels, as well as of wicked attempts to delude" (2 Thessalonians 2:9).  So, what does the international symbol for "peace" and "Victory" have to do with the devil?  Follow me down the rabbit hole. 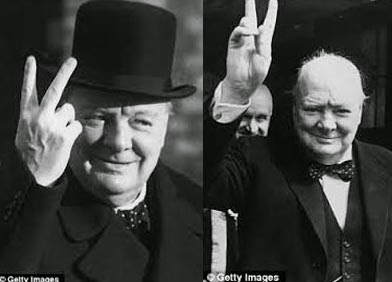 For those in the more mature generations, probably the most recognizable image of the "V for Victory" sign is that of Sir Winston Churchill, Great Britain's WW II Prime Minister.  There are hundreds of photos of him flashing the "V" sign, and it is assumed he is showing his confidence in defeating Nazi Germany and the inevitable Victory of the Allied Forces.  But did you know that he was a 33rd degree Freemason or alleged to be a Druid Priest? (Druids were priests, magicians, or soothsayers in the ancient pagan Celtic religion.)  And if you are too willing to dismiss this information, let me remind you that Albert Pike (a 33rd Degree Sovereign Grand Commander of the Masons, and given credit for developing the rituals of the order), said this in 1889:  "To you, Sovereign Grand Instructors General, we say this, that you may repeat it to the Brethren of the 32nd, 31st and 30th degrees: 'the Masonic Religion should be, by all of us initiates of the high degrees,  maintained in the purity of the Luciferian Doctrine. . .".  (Before I hear from everyone whose kindly grandfather was a Mason, let me reiterate, it is the "initiates in the high degrees" who have access to the Luciferian tenets.)
We Baby Boomers remember President Nixon flashing the "V" sign to signify both the hollow victory in Viet Nam and his unabashed departure from DC after impeachment.  The Millennial generation is familiar with their worshipped celebrities who flash the sign continuously, and I contend they don't have a clue as to its origins or significance.  What do they know of "peace" or "victory"?  Let alone that holding up their index and middle fingers, creating a V, sends a far more ominous message.
Yes, there's the supposedly historical significance during the 15th century, when Medieval Europe's archers would flash the V sign to their adversaries to show they still possessed the fingers they used to shoot their arrows  -- the enemy would often cut off these two fingers, which was a fate worse than death for an experienced archer.
But, as is so often the case, this seemingly innocent sign has been linked to something much more malevolent.  To some, it is a symbol for the horned God, Pan.  To others it symbolizes Baphomet, the horned Goat God, who the Knights Templar were accused of worshipping, and who has now become the symbol of the Church of Satan.  The ancient deity, Pan, is associated with nature, wilderness, sexuality, hunting and the life cycle; and is also prominent in the Wiccan religion.  Half man and half beast (with horns or antlers on his head), he represents "the union of the divine and animal".  According to Wikipedia, he was "worshipped by a pan-European witchcraft-based cult, and was demonized into the form of the devil by the Mediaeval Church."  (Maybe, there's a reason for that?) Down through the centuries, the V sign became associated with these demonized versions of Pan and Baphomet and symbolized their horns, and was utilized as a secret sign for both Masonic and Occult circles.  I found references that suggested that when the sign is given with the palm inside, it is recognized as a horribly vulgar and offensive gesture—signifying penetration of both body orifices.   Yet, when the sign is displayed in typical fashion -- with the palm facing outward -- it literally means intercourse by the devil—to be violated sexually by the horned God.
According to the website, Occult of Personality, the Goat God, Baphomet, is purported to represent the "sum total of the universe (e.g. male and female, good and evil, etc.); pointing to the unification of opposites: male and female, first and last matter, as above so below – Baphomet is the All, in the sense that Pan is the All – bisexual, chimerical, twirling the twin caduceus serpents."  (This site offers to help you on your "journey to self-discovery" and to take you to higher degrees.  And they aren't bashful about sharing information on the occult, mysticism and Freemasonry, if you so desire).
So, by now, are you seeing some familiar themes and concepts?  Do you see the "V" sign as a suggestion that sex can be used by the Devil and his minions to infiltrate our human existence?  Could the Music Industry be used as a gateway to introduce our vulnerable children to Satan's perverted designs on them?  Just scour the web for images of Miley Cyrus (with her tongue stuck out), Justin Bieber, or even Michael Jackson (who flashed the "V" sign after his court appearance for child molestation).   There's even a statue of Baphomet surrounded by adoring children that the Temple of Satan is trying to get placed in Oklahoma City near a statue of the 10 Commandments!
Can I prove that flashing this centuries old sign frees satanic activity upon the earth and us humans?  Of course not!  But I can look at its increased use in our culture and the entertainment industry and see the steady sexualization of our children.  I can also see that our society is embracing bisexuality, transgenderism and the co-mingling of human and animal genetics ... and aren't those the exact descriptions of what the ancient pagan (and I contend demonic) deities Pan and Baphomet represent?  Since the Garden of Eden, Satan has been able to tempt mankind through seemingly "innocent" deeds, and Genesis 6:4 shows us that the fallen angels can penetrate our earthly realm for vile sexual purposes.  Satan has been given a good measure of authority over this earth until Christ returns, and he will certainly use everything he can to achieve his agenda.
So, no matter if you think that flashing the "V" sign is harmless and benign, or if you truly believe in a spiritual war being waged all around us, I would ask you to think twice about signs, signals and symbols that you use in your life.  We are in a battle with Satan and his demonic forces, and far too many of us are falling for his counterfeit message of "peace" and "victory".