The Supreme Court Is In Session: How Will God Judge Us?

You may not realize it, but today is the day that the Supreme Court begins its next term.  As Americans, we hardly take note when the highest court of the land is in session.  I would daresay that most of us know very little of the history of the Court or its purpose within our governmental system.
Among other cases, this session of the Court may decide, once and for all, the legality of same-sex marriage, and therefore will deliver important consequences for our nation.  And, as always, I am completely taken by surprise when seemingly random thoughts occur to me, such as, I wonder if there is a Biblical parallel between how God used the Israelite Judges in the Bible, and our own Supreme Court?  Rather than dismiss these thoughts, especially if they are recurring, I usually conclude that they are not by chance, at all, and decide to follow where I am being led; so here we go .... 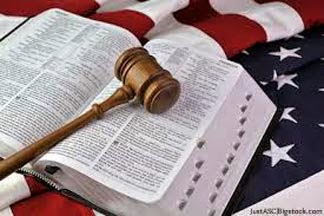 Let's start with the role of the Supreme Court.  It was interesting to research different opinions of the Court.  One website,  Scholastic.com, (which advocates Common Core), describes the Supreme Court in these terms:  "The Supreme Court is like a referee on a football field. The Congress, the President, the state police, and other government officials are the players. Some can pass laws, and others can enforce laws. But all exercise power within certain boundaries set by the Constitution. As the "referee" in the our system of government, it's the Supreme Court's job to say when government officials have [exceeded their authority and] stepped out-of-bounds."
Another site, Answers.com, says, "The Supreme Court, the only court created by the Constitution, has the final say on all legal matters that come to it ... The primary role of the US Supreme Court is interpreting the Constitution."  Both definitions make it clear that, in matters of law, the Supreme Court bases its judgments on "the highest law of all -- the Constitution."
That's where I think we, as a nation, have gotten off-track.  Shouldn't God's laws be the highest in the land?  Did you know that we have a history, since the founding of this nation, of conflict over a "Godless Constitution"?  Beginning in 1787, with the drafting of the Constitution, there was much debate over the role of God within the Constitution's framework, and the lack of mention of Him in the final draft.  Then in 1863, a group called the National Reform Association attempted to propose an amendment "to rectify the religious defect" in the document.  According to an article by the European Journal of American Studies, "Ministers attacked the Constitution from the pulpit, usually because it lacked reference to God."   Even in our lifetimes, we have seen this controversy around God's role in the administration of our nation, with the rise of the Moral Majority in the 1980s. 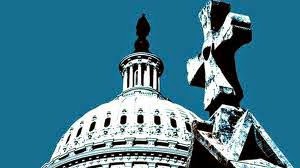 Inevitably, this argument comes back to the "separation of church and state" controversy.  We could debate endlessly on whether that was the original intent of our Founding Fathers or not; and other than their own writings on the subject, I am disinclined to accept any modern interpretation of their intentions.  That being said, we can accept this simple fact, as it has been presented by TheocracyWatch.org:  The word "God" does not appear within the text of the Constitution of the United States. After spending three-and-a-half months debating and negotiating about what should go into the document that would govern the land, the framers drafted a constitution that is [virtually] secular.  The U.S. Constitution is often confused with the Declaration of Independence, and it's important to understand the difference.  The Constitution is a legal document; the Declaration is not.
So, if we accept that our nation was founded with the idea that a legal document was to be "the highest law of all", does this explain how we've steadily wandered from acknowledgment of God as our Supreme Law-giver and Judge ... and that we ignore the highest law of all as established by God,  and He will judge whether we have obeyed His decrees?
As a Christian, it is my belief that all nations, leaders and judges have been given their authority by God; and these people[s] can be used by Him to bless us or to discipline us.  Just as in the Old Testament, after the capable leadership of Joshua, the nation of Israel no longer trusted in or obeyed God, and proceeded to "do what was right in its own eyes".   The Book of Judges chronicles the apostasy of Israel and the merciful deliverance of the nation through the Judges He provided.
Don't get confused by that word "deliverance".  It does not mean that God spared Israel from the consequences of its actions, as their repeated oppression by foreign nations testifies.  But God did show His compassion and His faithfulness through His covenant with Israel, by providing them Judges, who were political leaders that rescued them from their own unfaithfulness, and eventually delivered them from foreign threats or repression.
So, how does this relate to us, today?  In Judges, Chapter 2, the Bible says the people were "greatly distressed," and even though God "raised up judges who delivered them out of the hand of those who plundered them, they would not listen, but played the harlot with other gods, and bowed down to them."  This clearly shows that God remained faithful and took pity upon a wayward people who "grieved Him continually."  I contend that we qualify for grieving God, and are mirroring the apostasy of ancient Israel, resulting in a downward spiral of disobedience and idolatry that has taken us further away from God, our true Judge.  The question remains: Will He take pity on us in this age?
The Biblical history of the Israelite judges reveals that some accomplished more for God and the people than others.  For all intents and purposes, every generation got the leadership and judges it deserved.  What does that say about us, and what does it portend?  How will the Judges of our Supreme Court rule this session?  Will they be God's instrument of blessing, or will they represent His discipline upon our nation?
Since our Supreme Court has increasingly compromised Constitutional rulings for political ones; and we know that Biblical principles will not play a role in their decisions; we now have a deeply divided Court.  This will render the same-sex marriage issue not only the most important matter before the Court in determining our way of life, but it will be the defining legacy of this Court.  Since God is not present in the Constitution, and seems to be an absent influence in most of our political leaders, I think it is safe to say we can expect the Justices to do what they think is right "in their own eyes."   Or they could decide to delay a decision on this case, causing further dissension, and a continued disregard for God's opinion on the matter.
No matter what the Court decides in this controversial case -- or the others before it -- we, as a nation, must come to realize that disobedience invites discipline, and always brings judgment.  Whether we are judged to be a righteous nation, or an apostate one, will be revealed by those God has set to rule over us.  At the moment, our breakdown in responsiveness to our LORD, and our lack of conviction to His principles, has led us to a breakdown in our societal and moral fabric.
But we must never forget that God is always there for those who cry out to Him.  The Book of Judges reveals the cycles of decline and revival among the ancient nation of Israel.  We need to pray and cry out to God to prepare a Deliverer for this nation.  If that turns out to be the return of Christ, then that's wonderful!  If our Lord is delayed, then let's pray for a righteous leader[s] that will bring renewal to this oppressed land.  It's time to break this cycle and change the direction of this country.  With God's help, we can!

Judges 2:18    "And when the Lord raised them up judges, in their days He was moved to mercy, and heard the groanings of the afflicted, and delivered them from the slaughter of the oppressors."