The Frightening Mix of Halloween, Ouija, And The Souls Of The Dead

With each passing year, it seems that the controversy over celebrating Halloween continues to grow.  With the advent of TV shows like The Walking Dead and the newly released Constantine, as well as "reality shows" like Paranormal State and Ghost Hunters, it's hard to look upon my childhood holiday as the innocent exchange of candy for "trick or treating"; especially when the historical roots of the day are supposed to point to a "hallowed" or "holy" evening of remembering the dead.
Although purists will argue that this day simply commemorates those who have died, including saints (hallows), martyrs, and all the faithful departed believers, I sense that in this increasingly wicked world, it has discovered its real origins and been co-opted by something far more sinister.
My Biblical worldview is seeing a dangerous confluence between a rise of interest in the Occult, the existence of the Satanic Temple, and the overt exhibitions by the music industry into supernatural and demonic imagery.  You can try to convince me of the Christian influence of Halloween, but I'm not buying it.  Nowhere does it appear in the Bible as a feast or holy day to be celebrated.  In fact, we are warned not to seek out "anyone who practices divination or tells fortunes or interprets omens, or a sorcerer or a charmer or a medium or a necromancer or one who inquires of the dead."
That is why it is extremely disturbing to me to see a resurgence in the popularity of a talking game board we are all familiar with ... the Ouija Board.  How many of us have not come in contact with this intriguing game?  In our generation, it was simply a fun party game.  You asked the board a question and then swore that the other participant(s) were moving the planchette as it pointed to various letters, spelling out the answer you were after.  But I can remember my mother forbidding me to play with it, never really explaining why, other than to give me a creepy feeling that "ghosts" might be involved. 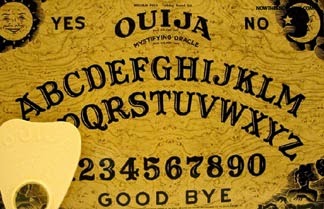 The eerie game board has since slipped in and out of popularity, along with Tarot cards, and séances.  But this Friday, on Halloween night (of course!) there's a new movie premiering called "Ouija".  And you guessed it, a group of kids, curious about contacting the soul of their dearly departed friend, find a Ouija board at her house and summon up dark powers from the demonic world.  Maybe I could dismiss it as just another attempt by the movie moguls to make a buck on the gullible public; except that I don't like the thought of a new generation of kids being seduced into making contact with evil spirits.  I say that, because I personally know that they exist.  Both my husband and myself have experienced their presence, in attempts to dissuade us from growing our faith.  And that faith explicitly tells us that God will turn His face away from us, if we turn to mediums or spiritualists.  Yet it seems to be an ever-increasing and attractive option in our culture.
Besides my own encounter, I faced a situation a couple of years ago that has left me unnerved.  While attending a weekend reunion of college dorm mates, one of the ladies asked another to do a Tarot card reading for her.  Now, I can remember during my college years being fascinated with wanting to know my future, and Tarot card readings were a trendy event during those years.  But having come to a knowledge of the saving grace of my Lord since that time, I was very uneasy when our group gathered around the kitchen table to watch the reading.  Out of eight women, only me and one other refused to take part.  I actually moved away from the table and prayed silently while the reading occurred.  And to the alarm of everyone there, the Death card was played.  The Reader gave some off-the-cuff answer that it didn't necessarily mean that the Player or her family were in any danger; it could simply mean that the hope of something they were pursuing or wishing to accomplish would come to naught.  But I felt a dread and foreboding ... why were they tempting Satan?  Sadly, this woman, who professed to be a Christian, and was so eager for a reading, has lost two daughters to suicide since that fateful night.
Coincidence?  Maybe.  But I am far more inclined to believe that she invited a malignant spirit into her life, and opened up her mind to the potential of these evil consequences.  Satan was only too eager to prove his power, and visited Death upon her daughters.
You may think I am exaggerating the influence of a silly deck of cards, but the Bible tells us stories that warn us to stay away from such interrelations ... King Saul and the Witch of Endor; the Demon-possessed man of Gadarene; the man possessed by Legion, which could imply up to 6,000 demons.  Today we have occultist groups openly celebrating Black Masses, the Satanic Temple distributing "educational" materials in Florida schools, and statues in town squares commemorating Satanic gods welcoming children.  Entertainment Weekly reports that, through Fox TV, "Warner Bros. has made a commitment for a pilot for a new show, titled "Lucifer", based on the same character of DC Comics fame.... Warners will also have five other primetime comic book series on air this season, including Arrow, The Flash, Constantine, Gotham and midseason entry iZombie.  If all goes according to plan, Supergirl and Titans could eventually join the fray."  In case you haven't noticed, they all encompass characters with supernatural, mystical, or god-like personas.
In fact, I tuned in to the premiere of Constantine, the other night --- I was curious as to what the show was about, seeing that the logo included an ancient-looking Cross as part of its design.  I could only make it through the first 10-15 minutes.  The lead character was confronted by multiple demon-possessed individuals that were all too real and horrifyingly fearsome.  Although he defeated them "in the name of his Maker" (I guess that's as vague as you can get, without having to declare God on TV these days) ... I simply did not want to let the images or impressions of those demonic spirits into my mind.  I know the power and influence they have been given by the Prince of this world, Satan, and the darkness that accompanies them.
That's why I fear what seems to be an overwhelming desire of movies and TV and music to introduce our kids to these entities.  It makes me wonder if God has fully turned away from us, and is giving us over to what we've asked for -- a world without His influence; a society that grows darker by the minute.  But we can refuse to go along with the culture, and we must test the spirits of this perverse generation.  The only Spirit that I have any interest in communicating with is the Holy Spirit; and I pray that He continues to protect and guide me through these perilous and evil days.

1 Timothy 4:1-2    "But the Holy Spirit distinctly and expressly declares that in latter times some will turn away from the faith, giving attention to deluding and seducing spirits and doctrines that demons teach, through the hypocrisy and pretensions of liars whose consciences are seared [whose souls are branded with the marks of sin]."