Sad Social Commentary: When Christian Values Are The Exception

This post may seem more "fluff-like" than usual.  But our culture is obsessed with celebrities, and their every move and comment is often the center of our national conversation.  Twitter and Facebook, as well as major news outlets, are full of the sexual escapades, lewd performances, scantily-clothed photos, and the flat-out immorality of people that our younger generations want to emulate.  So, it is worth noting when a young woman sticks to her Christian convictions and refuses to "play to the crowd." 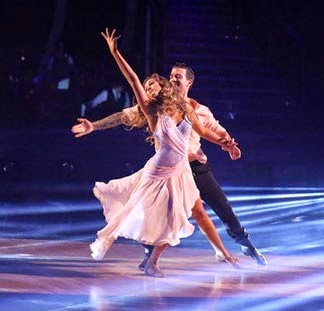 That young woman is Sadie Robertson, of the Duck Dynasty clan.  Yes, out-spoken Phil Robertson's granddaughter has taken her own stand on her faith.  She is appearing on this season of "Dancing With the Stars", and made it clear from the beginning that she didn't want to compromise her faith on the show; a show that is becoming increasingly more sexual in what is supposed to be a program featuring ballroom dancing.  (The costumes are becoming skimpier, and the moves are becoming so erotic that they would make a strip club dancer blush).
Not so, Miss Sadie.  She made it very clear that she was uncomfortable with the sexual nature of the Rhumba, the dance she was to perform this week.  You can see why she was nervous, based on this professional description of the dance:  The Rumba is a dance that tells a story of love and passion between a strong, male lover and a coy, teasing woman. Full of sensual movements, the Rumba is considered by many to be the sexiest of the ballroom dances.
Instead of sexy, Sadie stated that she hoped the choreography would be "sweet."  And how many girls her age do you know that would consult with their mother and grandmother, to make sure they approved of how she would be televised into millions of American homes?  Representing Christ, her values, and her family were obviously more important than seducing the public for votes.
Too bad her contemporaries don't have the class and maturity she showed.  This age group has seen girls like Miley Cyrus and Katy Perry abandon their Christian values to seek cultural adoration by "twerking", promoting sexual experimentation, and writing songs (Perry's Dark Horse) that she admits is "Witchy and dark".  Have they sold their souls to the devil in exchange for fame and fortune?  And how many others have followed that same path?  They start out in the public eye, seemingly innocent, and the visible personification of "squeaky clean".  Before long, they are tempted into selling a sexual and seductive image, that eventually degenerates into raunchy ... think Britney Spears, Beyonce; even Taylor Swift is moving that direction. (To be honest, I could not find a representative image that was not too offensive).
Why is Sadie Robertson's approach the exception?  How have we slid so far, so fast?  How did we go from "girl next door" role models like Julie Andrews and Mary Tyler Moore to raunchy examples of females like Nikki Minaj and Rihanna in my lifetime?  Is it this generation's answer to feminism? Does it make them feel empowered? Or is it just an extension of the exploitation and sexualization of our children for money?
I contend that when a culture abandons God's precepts and prefers to bow down to the false gods of fame, money, and celebrity, we are fertile ground for Satan's temptations.  We no longer fear the Lord, nor respect ourselves.  We simply debase ourselves in pursuit of fleshly desires; thereby cheapening what God designed to be valued, and making what was once beautiful, now ugly and dirty.  There was a time when our feminine sexuality was looked upon with awe and respect; now it is looked upon through the lens of lust.
So that is why I felt it was important to make note of what Sadie Robertson accomplished on Monday night.  She stuck to her principles, not willing to sacrifice her faith to please the judges or the public.  Earlier in the season of DWTS, the appropriateness of Sadie's dance moves was questioned by a judge, which reduced her to tears backstage.  It wasn't that she was embarrassed by the comments, as much as she worried that she might have let God and her family down.  This last Monday, she was once again reduced to tears when the judges scores reflected that her Christian values were being honored and applauded. In a culture that seems to lionize anything that spits in the face of God, Sadie scored high marks for standing up to the culture, and standing up for her God.


1 Timothy 6:9-10   "But they that will be rich fall into temptation and a snare, and into many foolish and hurtful lusts, which drown men in destruction and perdition. For the love of money is the root of all evil: which while some coveted after, they have erred from the faith, and pierced themselves through with many sorrows."
Posted by Pam Kohler at 7:00 AM