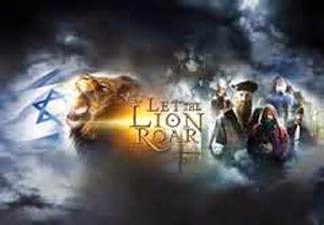 Many of you may have seen a trailer appearing on the web or social media, announcing a docudrama called "Let the Lion Roar."  Why is it significant, and why do I find it worthy of mention today?  It is more than likely going to rock the mainstream Christian Church, as it asks Christians, worldwide, to open their minds to a new reality of what the identity of the Church was meant to be -- and what it will be after our Savior returns.  It asks us to consider perhaps the greatest and darkest deception of our faith -- the conspiracy to cover up the Church's true identity.
Derek Frank is the author of this documentary and appears as the narrator in the film.  He recounts a "vision" that appeared to him over 20 years ago; a dream that repeatedly showed him images of the Reformation, and in which he discerned God telling him to "complete it".  What exactly did that mean, and how could he dare to scrutinize the revolutionary work of Martin Luther and John Calvin, two of the giants of the Christian faith?
These two men were largely responsible for extremely profound changes in Europe of the sixteenth century.  They are credited with "rediscovering the Gospel"; God used them to correct abuses within the established Church and to restore it to what God intended it to be.
Through their bold criticism of the Church of Rome, led by the pope, both mens' contributions led to great strides for the Church, and saw the formation of Protestantism and various denominations.  Luther's breakthrough came when he realized that the "righteousness before God" did not mean that "good works" could break God's system of punishment for man's sinful acts; but that "righteousness" came by faith in Jesus Christ, and was a gift from a merciful and loving God.  Where the "righteousness of God" had once been condemning for Luther, he now found it liberating and all of Scripture took on a new meaning.
Calvin's work was based on a rightness with God without a priest as a go-between.  He centered his work from the city of Geneva, Switzerland, where he attempted to impose his vision of "a visible city of God", complete with strict adherence to biblical principals and a righteousness achieved completely by grace and totally through faith.
Both men achieved great things for God.  But Derek Frank's vision uncovered where they stopped short -- and this is the part that will shock today's Christian who is comfortable with his identity -- where they deliberately ignored God's purpose for the Church.
Now, before you get angry, thinking that I'm desecrating the legacies of these two great theologians, please hear me out.  Like Mr. Frank, I applaud their outstanding leadership and courage in confronting the established Roman Church and their work to reform its corrupt theology.  They brought the light of the Gospel to the ordinary man and woman in the repressive Middle Ages.  I do not question their motives nor their immense study and grasp of the Scriptures.  But I join Derek Frank in believing that they were "insidiously deceived" by the Enemy, who stood to prosper from their misunderstanding of God's true identity for the Church. 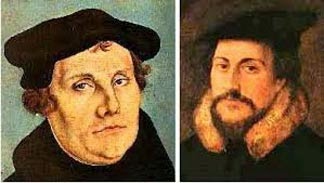 Both men failed to see that God intended His Church to include both Jew and Gentile.  Both men fell for Satan's lie that the Jews had been dispossessed of their favor with God.  Both men saw the advancement of the Church as to come through the Gentiles only.  Both men were anti-Semitic.  Let their own writings prove that last point:  "Burn their synagogues and schools; what will not burn, bury it with earth that neither stone nor rubbish remain.  In like manner, break into and destroy their homes.  Take away their prayer book and Talmuds.  For in them there is nothing but godlessness, lies, cursing, and swearing.  Forbid their Rabbis to teach, on pain of life or limb." (Luther).
Likewise, John Calvin held a similar view, saying, "[the Jews'] rotten and unbending stiff-neckedness deserves that they be oppressed unendingly and without measure or end, and that they die in their misery without the pity of anyone."  When asked about the meaning of Romans 11:26, in which Paul writes, "and so all Israel will be saved," Calvin dogmatically believed that "Israel" in this sense, meant "the Church."
Furthermore, his actions speak volumes. As Protestantism became illegal throughout Europe, and citizens either swore allegiance to the Catholic Church, or faced martyrdom, Calvin's model city of Geneva became known as a refuge for persecuted Protestants.  However, Jews, who were also being oppressed, were banned from living in Geneva.
But Luther and Calvin cannot be held responsible for generating this anti-Semitism in the Church.  Satan has been working his plan from the beginning of the Church.  He had not been able to keep the Jewish Messiah from being born, or to keep the early Church from its Jewish influences and roots; but he was patient.  He waited a couple of hundred years as more and more Gentiles flocked to Jesus's Church, and slowly introduced the seductive thought to the body of believers, "Did God really say that Israel is still significant?"
Both Luther and Calvin simply inherited the anti-Semitic teachings of deceived Church fathers:  Hilary, Bishop of Poitiers (300-368 AD) refused to eat with the Jews; Jerome (324-420 AD) wrote, "There could never be expiation (atonement) for the Jews; God has always hated them."  Bishop John Chrysostom (347-407AD) stated, "Because God hates the Jews, it is the duty of Christians to hate them."  The revered Augustine, one of the greatest thinkers of all time, said "The Jews were sons of God, but now they are sons of Satan."
How did Satan accomplish this great deception?  As Derek Frank points out, he was ingenious:  "The hook was that if salvation was personal and exclusively through Jesus, this was then the whole package.  By displacing Israel, the Church was elevated."  What did we need the Jews for? After all, hasn't it been us Gentiles who followed Jesus's command to spread the Gospel to the ends of the earth?  Ahhh, but we've forgotten that this command was taught to Jewish disciples, and it was Jews who first took the Gospel message back to the town and cities after Pentecost.  It is us, the Gentiles, who have removed the significance of the Jews from God's plan -- not God!
And because the Church has perpetuated this deception and not discovered its true identity ... that we are grafted into the Jewish faith, and God does not condone the popular Church doctrine of Replacement Theology -- we are seeing the consequences of our wrong beliefs.  The power of the Church has faded in our country and in Western civilization.  We have lost our grip and understanding of the Gospel message and Scripture; we have not produced good fruit for the Kingdom of God. 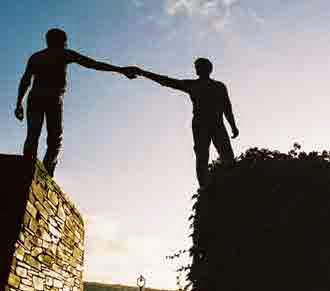 And because we don't know how our true identity is integrated with Israel, we are seeing a wedge being driven between us and Israel.  The nation of Israel is back in its "promised land", yet it is largely unsupported by the Church, which as Mr. Frank rightfully declares, "is blind to the truth that the gospel has always been 'first for the Jew, and then for the Gentile.' "
As the Church, we have focused on personal salvation, and we have failed to impact the nations of the world or to restore God's righteousness on earth.  But perhaps worst of all, we have not fulfilled God's destiny for us, which is "through the Church, [that] the manifold wisdom of God should be made known to the rulers and authorities in the heavenly realms, according to his eternal purpose which he accomplished in Christ Jesus."  We are supposed to be reflecting God's plan for the Church to all of heaven --- and we don't even know who we're supposed to be!
I have expounded too long on the Great Deception;  Derek Frank does a much better job of shining a light on this misunderstood truth in Church history.  I highly recommend that you purchase this revelatory DVD and watch it yourself ... show it to your friends ... bring it to your Pastor and Church body.  But, now is the time to foil Satan's lies and treachery.  Once we recognize our proper place, we can restore Israel to its deserved position, and we will rightfully pray for Yeshua's salvation to come to the Jews.   This is our destiny as ordained by YHVH!!!

Ephesians 3:6     "This mystery is that through the gospel the Gentiles are heirs together with Israel, members together of one body, and sharers together in the promise in Christ Jesus."