Let's see, there's a new non-profit in D.C., and their name is In Defense of Christians (IDC) and their website claims they are a " non-partisan organization whose mission is to heighten awareness among policymakers and the general public of the existence of ancient and often persecuted minority communities in the Middle East, particularly Christians. IDC will also conduct policy advocacy for vulnerable Christians and other religious minorities."  They go on to say, "Through greater awareness and advocacy, IDC hopes to influence the U.S. and foreign governments to adopt policies that will safeguard and empower minority religious communities in the Middle East, especially those vulnerable to violence, marginalization, and persecution." [My emphasis].
Furthermore, the inception of this organization was inspired by a letter that Armin Wegner wrote to Adolf Hitler in 1933.  Wegner was a WWI German soldier, medic, and human rights activist who witnessed the Armenian genocide in Turkey, and later became an outspoken critic of Hitler's persecution against the Jews.
Yet this organization who champions basic human rights and freedom of religion showed their true colors during a speech by Senator Ted Cruz.  Speaking to a group of (supposedly) Middle Eastern Christians who deplore the murderous rampage of ISIS in Iraq and Syria, Senator Cruz was booed off the stage after stating, "Christians have no greater ally than Israel." 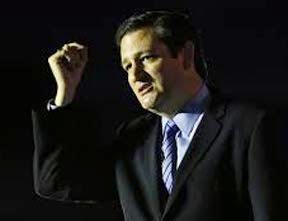 Cruz began his speech by appealing to Christian values in the face of Evil:  "We are all united in defense of Christians. Tonight, we are all united in defense of Jews. Tonight, we are all united in defense of people of good faith, who are standing together against those who would persecute and murder those who dare disagree with their religious teachings."  He continued by declaring that "Hate is hate; and Murder is Murder" ... no matter who instigates it.  Any group -- be it ISIS, Hamas, Hezbollah, Boko Haram, or States such as Iran -- who advocates hate and murder of another group based on religious faith, are all manifestations of the same evil.
Supposedly, the IDC conference was being held to discuss how to deal with the humanitarian crisis in the Middle East of religious minorities who suffer from violence, marginalization and persecution.  But at the mention of Israel, the crowd grew ugly.  Cruz tried to remind them that the same groups that hate Israel, hate America.  "Those who hate Jews hate Christians. If those in this room will not recognize that, then my heart weeps. If you hate the Jewish people you are not reflecting the teachings of Christ. And the very same people who persecute and murder Christians right now, who crucify Christians, who behead children, are the very same people who target Jews for their faith, for the same reason."
It was obvious that the Palestinian Christians in the room were having none of it.  I understand that the current war between Palestine and Israel has seen many Christians in that area suffering.  And it is obvious to me that the world cannot separate Zionism and the State of Israel, from the Jewish people and their status with our Christian God.  Depending on which side of that conflict you side with, you either see Israel's presence in the Middle East as a fulfillment of prophecy in which she is defending herself from Hamas and those who would like to see her wiped off the face of the map; or you see her as an unwelcome and illegitimate power in the region, who has displaced millions of people.  It is an argument that will never be won to the satisfaction of everyone.
In the end, Senator Cruz left the stage by declaring, "If you will not stand with Israel and the Jews, then I will not stand with you!"  For those who will choose to see this circumstance through the lens of Zionism, you cannot understand where Cruz is coming from.  For those misguided Christians who believe in Replacement Theology; you, too, will only see this situation from worldly eyes.  But for those who believe in the Word of God, and that He will one day remove the blindness from the Jews; and who understand that we will join faiths as a united Body of Christ eager for our Savior's imminent return ... then you know exactly where Senator Cruz's heart was in that statement.
We will continue to be misunderstood by those who hate for reasons that belie the Truth and Prophecy of the Bible.  But we must stand in solidarity and pray that God's hand in world affairs will soon be revealed.  In the meantime, I applaud Senator Cruz for putting his faith before politics, and speaking his truth.  He showed great courage in standing for God; that is a decidedly rare event in Washington D.C.

Ezekiel 39:27-28   "When I have brought them back from the nations and have gathered them from the countries of their enemies, I will show Myself holy through them in the sight of many nations.  Then they will know that I am the LORD their God, for though I sent them into exile among the nations, I will gather them to their own land, not leaving any behind."