Is Our Culture Lost?

I'm pretty sure that Phil Robertson, the patriarch of the Duck Dynasty clan is going to be criticized for his comment that "we are swimming in a cesspool of politically correct crap." I don't know to what specific elements of our culture he was talking about, but I have a few I'd like to add to his list. 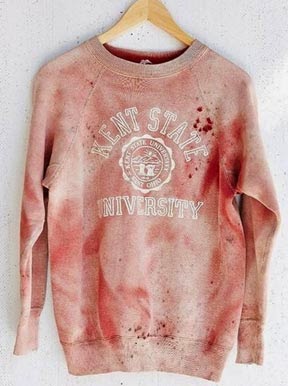 First, let's start with Urban Outfitters, the multinational clothing corporation known for its "bohemian, hipster, ironically humorous, kitschy, retro, and vintage styles."  Their latest fashion design deserves no less a description than "cruel and callous."  What insensitive company overseer decided that featuring a bloody Kent State sweatshirt made fashion sense?  If this was supposed to be an item in the "vintage" or "retro" category, they missed it big-time.  And there is certainly nothing "ironically humorous" about this tasteless piece of trash.
Was it some Generation Y-er who was trying to make a statement that he knew nothing about?  If he/she had lived (as I did) during this dark day in our history, they would not have tried to make a buck off such tragedy.  I can also only imagine that the trendy, young corporation may be trying to make a statement about gun violence.  If so, once again, they missed the mark.  As one Twitter post stated, "Nothing says 'hip" like murder."
The Kent State tragedy, which occurred in 1970, has left a stain upon the memory of the Vietnam War protests.  Four students were killed by the Ohio National Guard, and there is nothing "chic" or "fashion-forward" about this offensive attire.  Although a spokesman for the company said the item has been pulled and will not be sold, the Urban Outfitters  website says that the $129 sweatshirt has sold out.  Shame on them!
The next item up for mention in the cultural wasteland is The Satanic Children's Big Book of Activities, now available in public schools in Orange Country, Florida.  That's right, the Satanic Temple (the same organization that held a sold-out "Black Mass" in Oklahoma City yesterday), is now handing out illustrated coloring books, designed to introduce Satanism to our children.  According to ArtNetNews, a Christian group received permission to disseminate Bibles and other religious materials in the schools, which quickly engendered a lawsuit by David Williamson of the Central Florida Freethought Community.  Mr. Williamson "was seeking to distribute readings such as “Jesus Is Dead” and “Why I Am Not a Muslim,” and when the school board agreed to allow the atheist material, they inadvertently opened the door to Satanists as well.  Now, there's some of the Duck Commander's "politically correct crap."
ArtNet goes on to report that "The Satanic Temple is also responsible for the goat-headed Baphomet statue currently being created for display at the Oklahoma Statehouse in response to the installation of one of the Ten Commandments.  While Oklahoma is squarely in the sights of the Devil, he's obviously branching out and turning his attention to Florida.
And if you doubt the cunningness of the Enemy, just consider this statement by a Satanic Temple spokesperson:  "I am quite certain that all of the children in these Florida schools are already aware of the Christian religion and its Bible.  This might be the first exposure these children have to the actual practice of Satanism. We think many students will be very curious to see what we offer.”  I'd be pulling my kids out of public school so fast; no way would I let this evil near them! 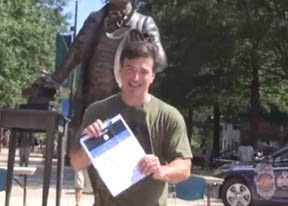 Finally, if you need more proof as to the potentially harmful culture of college campuses today, and the gullibility of our university students consider this fake petition drive .... Dan Joseph of the conservative Media Research Center took to the grounds of George Mason University in Fairfax, Virginia, appealing to students to sign a fake petition supporting the Islamic State, and calling on President Barack Obama not to bomb the terrorist group... and on the anniversary of 9/11.
Listen to Joseph's incredulous pitch: "We are supporting ISIS today. We are telling President Obama to support the fighters of the Islamic State of Iraq and Syria — do not bomb them...  They are just like us, only with slightly more beheadings."  Even more incredible is that students actually signed the petition!  According to a report on The Blaze, "at one point, a female student claims that American journalist Steven Sotloff, who was beheaded by Islamic State militants, was actually with the Mossad, an important Israeli intelligence agency. The same student tells Joseph not to get her “started” on what Christians used to do to nonbelievers.  'Every religion has its moment,' she said, seemingly downplaying radical Islam."
If this doesn't concern you about the state of awareness of our next generation of leaders -- it should!  When one military veteran challenged Joseph about the petition, Joseph asked him, "Why do you think I've been able to get so many signatures."  The veteran answered, "Because they don't watch the news, and they are uneducated when they vote."  Yep, that's our culture!
So what do we do about it?  And is it too late?  I know that every generation thinks the next one or two have lost some of the virtues and backbone that they possess.  But believing that the Bible gives us detailed instructions on how we are to live, and seeing that our culture has eliminated the Bible as a teaching tool from our schools and institutions -- and indeed, discards and rejects many of its principles -- I can't help but worry that we are on a rudderless ship.  But what's even more important, is that there will be a steep price to pay for the abandonment of these truths.  Pray that we can revive and regenerate a new desire to return to God, pleasing and glorifying Him in all we say and do.

Colossians 3:5-6    "So put to death the parts of your life that belong to the earth, such as sexual immorality, moral corruption, lust, evil desire, and greed (which is idolatry). The wrath of God is coming upon disobedient people because of these things. "