A Different Look At The Palestinian/Israeli Conflict 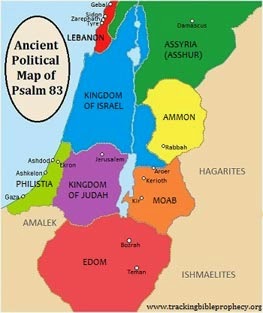 Last week our President joined world leaders to speak before the United Nations General Assembly about the various crises in the Middle East.  At the top of everyone's list was stopping the barbarism and evil that is the Islamic State.  But always at the center of any discussion of the Middle East is the ongoing tension between the Palestinians and the Israelis; a battle that has been in view since Joshua captured the Land of Canaan as far as Gaza.  Unfortunately, this conflict is also blamed for much of the tension and hostilities in the region.
If you do not have an accurate Biblical worldview, it is easy to get caught up in the emotions of the Palestinian situation and to see only through a narrow focus.  Many people, including Christians and secularists alike, view Gaza and the West Bank as belonging to the Palestinian people, who have been removed from their homeland to make way for what they believe is an illegally transplanted race of people, the Jews.  But, if one were to do an in-depth study of who the Palestinian people are, it is not as simple as the afore-mentioned argument would have you believe.
Here are some interesting thoughts to digest:  although the idea of a distinct and defined "Palestinian" national identity is relatively new (dating from the early 20th century),  modern Palestinians are actually the descendants of the peoples who have lived in Palestine over the centuries -- through all the various wars and exoduses spanning all the great Empires of the world.
Also, despite the heated rhetoric over "national"  and "religious" identification ... Arabs vs. Israelis; Muslims vs. Jews ... did you know that "Genetic analysis suggests that a majority of the Muslims of Palestine, inclusive of Arab citizens of Israel, are descendants of Christians, Jews and other earlier inhabitants of the eastern Mediterranean whose core may reach back to prehistoric times? A study of high-resolution haplotypes demonstrated that a substantial portion of Y chromosomes of Israeli Jews (70%) and of Palestinian Muslim Arabs (82%) belonged to the same chromosome pool." [Statistics from research done by Ann Gibbons of the American Academy for the Advancement of Science, and from proceedings involving M.F. Hammer of the U.S. National Academy of Science.]
All this background information barely scratches the surface of why one must look beyond current emotions and political biases to see a Biblical view of this crisis.  To begin with, "the same chromosome pool" points to a common Biblical ancestor, Abraham, who was the father of Ishmael, the progenitor of Arabs and Muslims, as well as the father of Isaac, the forefather of the nation of Israel, including the tribe of Judah, and consequently, the Jews.  The Bible, and recorded history, show us that there has been animosity between these two groups of peoples since their inception.  And there will be trouble between them until the end of this world as we know it.
Which brings me back to the series of speeches before the U.N. General Assembly.  Leaders of the major players in this conflict -- from the U.S. to Iran to Israel, and more -- are attempting to offer their solutions as to how the major conflicts in the regions of the Middle East can best be handled.  But when the subject of Palestine and Israel comes up, both Christians and Secularists tend to miss the big picture. 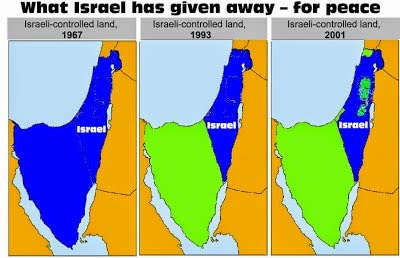 With a clear understanding of the Bible, I believe you will find that Israel is to be a blessing to the nations of the world while living in the Land that God bequeathed to them (the whole land of ancient Canaan) -- but only as long as Israel is faithful to her God.  A failure to be faithful will result in correction, loss of land, and potential wars; and God will use the surrounding nations to dispense His judgment.  You can see this pictured by the continual concessions Israel has made in giving up "land for peace", and by the numbers of Israelis who identify themselves as "secular" or "not very religious" (67%), versus those who say they are "ultra-Orthodox", "religious", or "traditionally, Jewish" (33%).
As Christians, it is naive of us to think that just because the "Jews are back in the Land", that they are guaranteed to occupy it or deserve it.  I believe that the Bible very clearly says that God will not let them be in the Holy land without being holy people... so I believe that Israel will continue to struggle in the coming years until she is finally backed into a corner, and the only way out will be to turn to her Savior.
So while leaders stand before the podium at the UN General Assembly, and offer their solutions for peace, there is not a political solution to this crisis; only a Biblical answer.  To be a Biblical Zionist is not to be a political Zionist.  But I also want to caution those who might think that God's way of dealing with His chosen people involves His endorsement of Hamas, the PLO, or Islamic jihad.  God's discipline concerning Israel will never include such evil ideologies.  No, God has a much wider purpose in the Middle East conflicts .. it is to glorify Himself and to give the surrounding nations an opportunity to come into relationship with Him.
Whether secularist or Christian, it is important to look beyond the narrow scope of political and nationalistic passions.  We must all pray for the peace of Jerusalem, and for those nations who are currently hostile to her; the true salvation of the Jewish people and Arabs, alike, depends upon their recognition of Israel's Messiah.  I urge you to read what this Holy Book says about the final stages of God's redemptive plan --- for all the people of the World.  It is most definitely focused in this hotly contested geographic region, and the peoples of Palestine, the Middle East and Israel will all play a part.  But we must never forget ... the ultimate victory will be His!