Will Our Technology Destroy Us?

There is no doubt that we live in an advanced technological world.  Everyone is "wired", and our "progress" finds us all becoming slaves to machinery and equipment supposedly developed to improve our lives.  I recently read an interesting article on Truthstream Media, in which the author, Daniel Taylor, pointed out that both C.S. Lewis, the lay theologian and Christian apologist, and George Orwell, the noted author and skeptical Christian, both came to the same conclusion:  that sooner or later, the human race would pay for its obsession with power and self-glorification.
They both lived just prior to the explosion of the "computer age", yet their words are incredibly prophetic:
•  “Dreams of the far future destiny of man were dragging up, from its shallow and unquiet grave, the old dream of man as god…” – C.S. Lewis, That Hideous Strength, 1945.
•  “All superfluous life is to be wiped out, all natural forces tamed, the common people are to be used as slaves and vivisection subjects by the ruling caste of scientists, who even see their way to conferring immortal life upon themselves. Man, in short, is to storm the heavens and overthrow the gods, or even to become a god himself ... we are within sight of the time when such dreams will be realizable.” -- George Orwell, The Scientists Take Over, 1945. 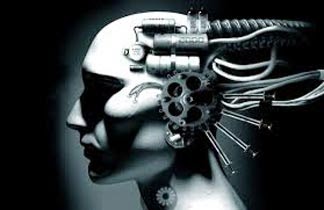 Both men have accurately portrayed the lust for ever-more interactive relationships between man and machine.  And I think they correctly foresaw that it was all about power and making man "little g" gods.  But this is nothing new ... it is the same rebellion and self-glorification that occurred at the Tower of Babel and throughout all the ages.  But the difference now is that scientists are not so much interested in "storming heaven" to overthrow God; they are hell-bent on developing ways that simply don't acknowledge He even exists.  It's all about making God irrelevant, and finding new ways of controlling us.
That's what the transhumanist movement is all about... incorporating technology with the human body to effectively live forever; to control human memory, human sensitivity and vulnerability; and to limit human intelligence.  The end result will be what British historian E.P. Thompson called "Exterminism".  In his own words, Thompson explained it this way:  "Exterminism designates those characteristics of a society which thrust it in the direction whose outcome must be the extermination of millions...".
Now, I can guarantee you that all those who are addicted to their technology systems will call me old-fashioned and out-of-step.  They are lining up to receive the next innovation that will enslave them.  But when scientists are proclaiming victory by replacing human organs with artificial ones; wanting to inject nanobots into my blood stream; and proposing that I store my brain in "the Cloud", then I don't think it's too preposterous to consider that computerized robots may one day declare us a threat or unnecessary!
And believe me, they are selling the lie in every commercial, every movie, in our music, and every form of entertainment.  We are being sold the concept of "radical human evolution, aided by technology."  Some scientists and futurists go so far as conceiving a new species when all this revolutionary technology is applied to the human race.
In his article, Taylor writes, "Technologies for the improvement of human performance are at the center of transhumanist thought. Most of these technologies begin with military applications, and only after a period of use by the military or black operations are they unveiled to the general public. In 2008 the JASON group, the Pentagon’s top scientific advisers, warned that the U.S. military could face enemies with technologically enhanced abilities. These capabilities include brain-machine interfaces and pharmaceutical drugs that enhance cognitive abilities."
Is this the kind of world you want to live in?  Me neither, but the following quote is enough to have me praying, "Come Lord, Jesus!"  Taylor expresses this ominous opinion: "Some scientists are predicting that getting chip implants will become mandatory due to overwhelming societal pressure. Cybernetics scientist Dr Mark Gasson told the Sydney Morning Herald that, 'It’s not possible to interact in society today in any meaningful way, without having a mobile phone. I think human implants will go along a similar route. It will be such a disadvantage not to have the implant that it will essentially not be optional.' "
In the end, each of us may be confronted by the power-hungry and spiritually-bereft who are determined to rob us of our innate "God-ness".   For those of us who have the Spirit of God within us, nothing can separate us from the hand of our Lord.  But I fear for those who will embrace such Godless "progress"....