My mind and my soul are in turmoil.  Half a world away, children are beheaded; women are kidnapped, raped and subjected to sexual slavery; and men are being executed and their dead bodies hung on makeshift crucifixes.  The "soldiers" of ISIS have demanded conversion to Islam or death.  Their bold assault in Iraq amounts to a systemic slaughter of "infidels", and ultimate genocide. 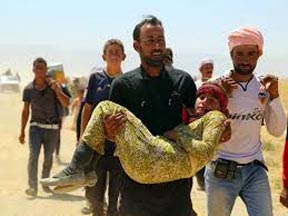 Just yesterday, an Iraqi government minister told Reuters, "Islamic State militants have killed at least 500 members of Iraq's Yazidi minority, burying some alive and taking hundreds of women as slaves."  The Yazidi are a Kurdish-speaking ethnic/religious group that predates Christianity.  Their faith is a combination of early Mesopotamian religions and Persian philosophies, dating back thousands of years.  They believe in a God who created the world, and the central figure of their faith is the Peacock Angel, who some argue shares the same narrative as Satan.  Regardless of the suspicions we Westerners might have about this ancient religion, the fact remains that they are in the path of pure Evil.
Yet, our media is just now beginning to grasp the depth of this threat.  In reality, they are falling far short of reporting the full scope of ISIS's intent.  While the world is focused on the atrocities in Iraq, ISIS, (or IS -- Islamic State -- as it is now referring to itself), has turned its attention to gaining a foothold in nearby Lebanon.  Israel National News reports that ISIS began its campaign with car bombs and suicide bombers, and is now engaging in a full-on battle with the Lebanese Army.  For now, Hezbollah, the Shia Islamist militant group, has refused to get involved in fighting the Sunni jihadists of ISIS.  That may soon change with the recent ISIS announcement  “that the time had come to implement its plan and announce a vast Islamic emirate, imposing its emirs while sabotaging the Arab world and pushing it into the furnace of ignorance and backwardness in the name of Islam."
And it's not only the Arab world that they plan on conquering.  Through a sophisticated social media blitz, the group leaves no doubt as to who their future target is .... US!  To show you just how twisted this world has become, terrorist groups now take to Twitter to foment their propaganda and threats.  They post cellphone images of their black flag of jihad with the White House in the background, and messages such as "We are here America, near our target... sooooon", and "We are in your states, we are in your cities, we are in your streets.  We are anywhere".  They make no bones about it ... they vow to one day “raise the flag of Muhammad in the White House.”
How seriously do Americans take this threat?  How seriously does our government?  They roam the deserts and towns of Iraq in abandoned U.S. Humvees and upload their grisly brutality on social media videos.  The Daily Mail reports they have seized control of the vital Mosul Dam in Northern Iraq, which supplies water and power to millions of Iraqis. There are fears its destruction would unleash a 65-foot wave that could overwhelm Mosul and even cause flooding in Baghdad.  Furthermore, their medieval style of Islam has now been imposed on a portion of Iraq and Syria the size of Great Britain.  And they have no intentions of stopping there!  Even the fearsome Kurdish fighters are fleeing the advance of ISIS, along with 150,000 residents running for their lives.
Yes, the US and Britain have dropped relief supplies to the Yazidis who are trapped on a mountaintop; and we have dropped strategic bombs in an attempt to stall the "caliphate".  But if we thought the Kurds could defeat the evil that is ISIS by themselves, we are being shown just how much we underestimate this group.  As one Kurdish fighter explained, "‘Everything they have is American – it is all the latest equipment with the big guns, the Humvees."  (And now we are bombing  our own equipment, left behind when we withdrew our troops!  Oh, the irony of it all!)
I am hard-pressed to see where this all ends.  I believe this is an evil force like the world has not seen since Hitler.  It cannot be placated, and it will not be easily defeated.  Perhaps only God's heavenly army can destroy it; but it must be destroyed.  I urge you to take a look at the video series on the Islamic State by award-winning journalist and filmmaker Medyan Dairieh, who spent 10 days inside the Islamic State for Vice News. He is the first Western journalist to be embedded inside the world's most dangerous terrorist group, documenting its inner workings. 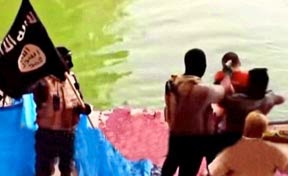 I don't want to spoil his report, but suffice it to say he saw "a regime of absolute control which imposed its strict sharia laws ... a very organized army .... whose ruthless ambition is to take over the world."  What are we Bible-believing Christians to make of this?  How many of us know what the final book of the Bible, Revelation, tells us?  Sadly, I know of too many denominations who ignore this last book of the Bible, or flat out choose to negate it as "having already occurred".  That philosophy is embraced at great risk!
We Christians like to think we know the complete story of the Bible ... but too many limit it to the New Testament only and Christ's First Coming, culminating in the glorious rapture of the Saints and His Second Appearance on Earth.  These Believers never look at the warnings issued by Jesus or Paul or Peter, and choose to concentrate on the message of Grace.  But God gave us the entire Bible for a reason!  There's a reason we are told of Satan's fall ... it is because he wants to usurp Yeshua's position at the right hand of God; he wants to dethrone Jesus and crown himself King.  The Old Testament is full of accounts of Satan's plan to accomplish this goal, and he continues into the New Testament; thinking that he has won when Jesus is crucified.  But the Resurrection showed the Devil that he was again defeated.  So do you really think that he is going to give up that easy?  Satan knows God's plan to send His Son back to rescue those He calls His own.  And he is well aware that this time, Jesus is coming to condemn the wicked and that He will finally, and once for all, deliver his [Satan's] final defeat in the lake of fire and sulphur.
So can Believers envision how much Evil Satan is going to pour out on the earth in his final attempt to win over the inhabitants of the earth and spoil Jesus's victory?  Do they really think it is going to be smooth sailing out of this world?  It hasn't been for centuries of Christians who have been called to "suffer with Christ"!  Why should it be for us?
Whether ISIS is the culmination of Satan's final evil plan, I cannot say with certainty.  But they sure show signs of his influence and his hatred of Christians and Jews.  I pray that we do not have to face this threat firsthand.  And I pray for the thousands of fellow Christians who are being tested and refuse to renounce our faith.  May they feel the presence of our Lord in this hour of their trials.

1 Peter 3:14    "But even if you should suffer for righteousness' sake, you will be blessed. Have no fear of them, nor be troubled,"