Ebola UPDATE: This Is Getting Serious!

I don't like to be reactionary and I don't like to panic, but thanks to a website called Natural News.com, there are some facts about the recent Ebola outbreak that I think you should know.  First, the family of Dr. Kent Brantly, the American doctor who has reportedly contracted Ebola while working in Liberia, has been quarantined in Abilene, TX.  His wife, Amber, and their two small children, who returned stateside, are under a 21-day watch for development of symptoms of Ebola.  (LATEST UPDATE:  Dr. Brantly is being moved to the U.S. for further treatment.  I honestly don't know if this is a good move or not.  While I want the best care for him, does this present a greater possibility of spreading the disease here at home?  My prayers are with him and his family.)
That being said, I don't have to tell you what this could mean if any subsequent members of the Brantly family develop the disease.  This could potentially become a domestic national emergency scenario.  If there is a case of Ebola in Abilene, TX, what are the chances that it spreads?  Could an entire city be put under quarantine?  What is the likelihood that martial law is enacted to "protect the populace"? 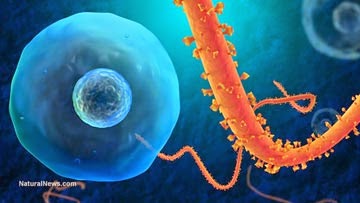 Secondly, I want to introduce you to TEKMIRA, a pharmaceutical company that is a self-proclaimed world leader in RNA interference (RNAi) delivery technology via nanotechnology.  INTERPRETATION:  genetic manipulation using nanotechnology.  Why am I telling you this?  Would it raise any suspicions on your part to know that TEKMIRA just received a $1.5 million cash contribution from Monsanto?  Or that one of their partners is Bristol-Meyers Squibb?  Or that this same pharmaceutical company also received a $140 million contract from the Department of Defense, and was granted a Fast Track designation from the U.S. Food and Drug Administration for the development of it's vaccine, TKM-Ebola?
Is this all coincidental, or do they know something we don't?  Wherever Monsanto is involved, you can bet that there is some underlying benefit to their bottom line.  In this case, the Wall Street Journal speculates that should an Ebola epidemic become reality, this deal could be worth over $86 billion for an effective Ebola drug.
And I'm sorry, but are we taking all the necessary precautions to stop this horrible disease from becoming rampant in our country?  OK, we've quarantined a family in Texas, but what about the President going forward with a summit meeting in Africa this next week?  It seems to me that the continent of Africa is on the verge of panic, closing down borders and airline travel, yet we are going to endanger our government officials, and then possibly bring the disease back to our shores?  The subject of the vulnerability at our southern border should be obvious to everyone, yet I don't see precautions being taken.  How is it moral or ethical to maintain an "open borders" policy, when the world is experiencing a global Ebola outbreak?  The fact that the Department of Defense has dispensed Ebola Detection Kits to National Guard teams throughout all 50 states, doesn't really give me much comfort.  Detection kits won't stop the spread; they will just identify the current case.  I want some real prevention!
Then, just in case you haven't seen this bit of news as reported by The Daily Mail, here is something you might want to pay attention to:  "Nigerian health officials are in the process of trying to trace 30,000 people, believed to be at risk of contracting the highly-infectious virus, following the death of American Patrick Sawyer in Lagos."  Just how in the world is that going to be accomplished?  And if this scenario isn't enough to scare you, consider this fact from the Public Health Agency of Canada:  "It takes just ONE aerosolized organism (a microscopic virus riding on a dust particle) to cause a full-blown infection in humans. This is why one man vomiting on an international flight can infect dozens or hundreds of other people all at once."  And now there is a potential for 30,000 people to be infected?  Multiply 30,000 by 12 or 100 and you can see where I'm going with this!
The purpose of this post is not to unnecessarily scare you, but to inform you.  I believe that the MSM is down-playing this too much, and the government is not being forthcoming with their information or plans.  So I want you to know where it stands today, and to take as many precautions as you can ... and I would put prayer at the top of that list.

Revelation 18:4    Then I heard another voice from heaven saying, “Come out of her, my people, lest you take part in her sins, lest you share in her plagues;"