The Unbelievers In the Church

This post is likely to be condemned by many.  But I cannot sit idly by and not comment on the latest controversy within the Church.  To that end, one of the benefits of where the Lord has placed me at this time in my life, is that I have the liberty and time to do a lot of studying and research.  It has not been until the last few years that I have taken advantage of this opportunity; and I owe my newfound dedication to the desire that He has instilled in my heart.  I now have a hunger to know more about Him; to see more clearly how I, as a Believer, am to view this world; and to discern how I am to consider the changes coming in the modern Church.
Please know that I do not claim any unique revelations.  My thoughts and opinions are my own.  That being said, I enjoy listening to various "Watchmen", whom I believe have had sincere callings on their lives.  When I consider any of their commentaries, I compare them to Scripture, and then let the Holy Spirit guide my thoughts to align with God's. 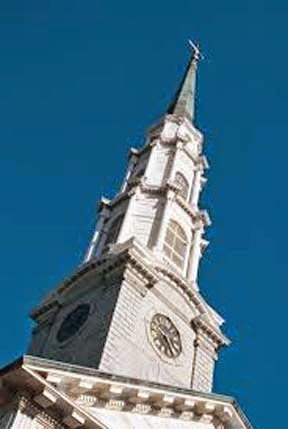 I am telling you all this as a preface to what I think is a disturbing trend among American Christians.  When I see a major U.S. denomination openly disregard the teachings of Scripture, I must agree with the Watchman, Pastor David Lankford, who boldly calls them "Unbelievers".  If you haven't guessed by now, I am talking about the Presbyterian Church (U.S.A.)’s official embrace of same-sex marriage at its General Assembly meeting last week.  The decision was made to allow clergy to marry gay couples in states where same-sex unions are legal, and the resolution has been met with approval by both gay rights activists and Church pastors alike.
The executive director of a gay rights organization in Iowa stated, “More and more, we are seeing people of faith embrace the freedom to marry. And so, it only makes sense that the Presbyterian Church (U.S.A.) — one of the largest Christian groups in the nation — makes this important step toward equality.”  Then there was this statement by the pastor of Memorial Presbyterian Church in Bay City, Michigan, "God loves everybody.  There’s got to be someone out there that someone can fall in love with, and if they happen to be of the same sex, that’s God’s will as well.”  While his state doesn’t permit same-sex marriage, he said that his church is prepared to offer gay matrimonies if and when the time comes.
First of all, this is not an issue of "loving our fellow man", and I will deny any charges of enmity or bigotry.  For me, it is all about honoring God's Word.  So, here is where I must agree with Pastor Lankford.  I can almost guarantee that each member of those Presbyterian congregations consider themselves "people of faith" and "Believers".  But here is my heartfelt question:  How can you call yourself a Believer, if by your words and your actions, you do not believe God's Word?  As His Church, shouldn't you seek to know what He says about the institution of marriage?  And if you are a believer of His Word, then you know that you cannot please both Him and the World.
I will tell you that if you google "the biblical definition of marriage", you will find numerous links to sites that declare "there is no specific details or directions about marriage".  Other sites will say "The Bible's definition of marriage can be confusing and contradictory".  There's even a site written by a Jewish rabbi which states, "The Bible does not give any single, clear definition of marriage."  But I must ask them all this question:  Are you searching the Scriptures for how God established His ordained union, or are you cherry-picking Scripture to echo the culture and make yourselves more relevant?
You see, if I am going to call myself a "Believer", then I hold myself to the standard of believing what God has told me in the Book of Genesis.  Specifically, in Genesis chapter 2, God declares it is not good for Adam (the first man) to live alone. All the animals are there, but none of them are a suitable partner for Adam. God, therefore, in a special act of creation, makes a woman. Just a few verses later, the woman is called “his wife” (Genesis 2:25). Eden was the scene of the first marriage, ordained by God Himself. The author of Genesis then records the standard by which all future marriages are defined: “A man leaves his father and mother and is united to his wife, and they become one flesh” (Genesis 2:24).
This passage of Scripture gives several points for understanding God’s design for marriage. First, marriage involves a man and a woman. The Hebrew word for “wife” is gender-specific; it cannot mean anything other than “a woman.” There is no passage in Scripture that mentions a marriage involving anything other than a man and a woman. It is impossible for a family to form or human reproduction to take place asexually. Since God ordained sex to only take place between a married couple, it follows that God’s design is for the family unit to be formed when a man and woman come together in a sexual relationship and have children.
So, no matter how much "the faithful" in the modern Church want to honor love between people, no matter their sex, and proclaim that it is "God's will" that they should be married, they can only do that if they do not believe God's Word.  That would make them an "Unbeliever", even if they consider themselves Christian.  I know that sounds harsh and condemning, but it is really a simple matter of semantics.  If you are a Believer, you are a devotee of God, who reveals Himself and His higher authority through His Word.  You believe (trust and accept) His Word -- every word!  That does not mean that we get to reinterpret His Word to reflect our human feelings and desires, no matter how "loving" they may seem.  The very need to reinterpret the Bible shows that one disbelieves what has been revealed.  Therefore, I guess it should come as no surprise that the world desires to change what God has instituted in order to satisfy their human desires.
But it saddens me to see the Church following the culture, rather than leading it.  In so doing, they (seem to me) to have lost their purpose ... to preach the Gospel to all people that the lost may be saved and that the righteous might be encouraged and edified.  Perhaps they no longer believe this either.

Romans 8:7    "For the mind that is set on the flesh is hostile to God, for it does not submit to God's law; indeed, it cannot."

Email ThisBlogThis!Share to TwitterShare to FacebookShare to Pinterest
Labels: Christianity, Faith, Our Culture., The Church