Let's Look At The Entire Picture

I have heard various member of the Mainstream Media decrying the "inhuman" conditions that the illegal immigrants are enduring on our Southern border.  Pictures flood the airwaves of thousands of children crowded into what amounts to holding tanks.  And the talking heads criticize the Border Patrol for compelling these unaccompanied minors to be housed in such dangerous and unhealthy conditions.
It is true that conditions are abysmal.  It is also true that these minors have traveled hundreds, sometimes thousands, of miles to freedom, only to find themselves restricted from "the promised land".  But that appears to be temporary and is only part of the story. 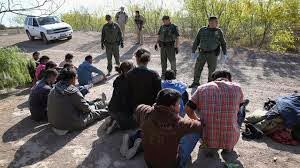 Our Border Patrol has suddenly found themselves being overwhelmed because of the misguided policy of our federal government.  There is no room to house the vast quantity of people.  The immigrants, themselves, have told Border agents that they are streaming in unprecedented numbers to our country because rumors about so-called “permisos” – permission to stay in the United States – are running wild across Central America.  The word is that they will be welcomed and given entry.  Our Border Patrol has been given no help in dealing with this influx, and they have simply been deluged by this flood of humanity.
As Fox News has reported, the sheer numbers of children and "family units" arriving daily has swamped the system.  The children and unaccompanied minors can’t be immediately sent back – and they can’t be left alone in the U.S. to fend for themselves. They are supposed to be handed off to the Department of Health and Human Services within 72 hours.  The numbers simply make that impossible.  And as many children as have crossed the border, their numbers are eclipsed by the "family units" racing to get into the United States. They are traveling hundreds of miles with small children, knowing that under U.S. law, they will not be deported immediately. Many of them are in the advanced stages of pregnancy and will likely have a child that will become an American citizen.
The problem is not one that has an easy solution.  What makes it worse is that the men and women that comprise the U.S. Border patrol have been instructed not to talk to the media.  But why?  Will they cast a shadow on the image of helpless children that pro-Amnesty supporters want the American people to see?  Will their testimony cast doubt on the Department of Homeland Security's policy of "deferred action for childhood arrivals?" This policy allows children and family units to stay in the U.S. for at least three months pending removal action.  And scariest of all, do these images belie the threat of possible terrorists integrating among the innocents?
Texas Representative Henry Cuellar, who is a Democrat, by the way, is critical of our current immigration policies.  “If you're a pregnant woman, or you're a family unit, they’re gonna give you a piece of paper where you promise to show up in 90 days,” Cuellar told Fox. “And I tell you, they're not going to show up in 90 days. No way.”
Does our immigration policy need to be rewritten? Strengthened? Updated? Absolutely!  But creating a humanitarian crisis in an effort to overwhelm and collapse the current system is not only unethical; it is immoral.  These are people, not just numbers.  And we are encouraging them and exploiting them for political gain, while censoring and threatening our hard-working Border Patrol agents for speaking the truth.   They will tell you there are those seeking asylum because they love the freedom this country offers, and those who want nothing more than to destroy the freedom that America represents.  Sadly, we are not just facing embattled fronts in Afghanistan and Iraq; we now have a new line to defend and it is on our own Southern border.  May Heaven's hosts protect us!

UPDATE:  Texas Governor Rick Perry is now using up to $1.3 million per week to secure the Texas Border.  Texas Department of Public Safety officers will assist Border Patrol agents in dealing with the humanitarian crisis.  Meanwhile a small town in the state of Virginia refused to become the location of a large illegal immigrant shelter, housing hundreds of Central American children.  The U.S. Department of Health and Human Services must now try to relocate these vulnerable children to a new site.  This crisis is growing out of control!

Psalm 91:11    "For He will give His angels [especial] charge over you to accompany and defend and preserve you in all your ways [of obedience and service]."