Yesterday afternoon I tried to make a phone call and kept getting a busy signal.  When it happened on several other numbers I tried to call, I started paying attention to exactly what was happening.  Before I finished dialing, the busy signal went into effect, so then I knew something must be wrong with AT&T's system.  No calls in, no calls out.  Great!
I called on my cell to report the incident and, of course, only got the robo-call, which said it would be the end of the week before it was repaired.  Unbelievable!  There wasn't much I could do about it.  I at least had my cell phone ... at least I thought I did.  Before long, I was unable to get cell coverage unless I walked across my acreage to the old barn, the highest point on the property.  Now I really started wondering what was going on! 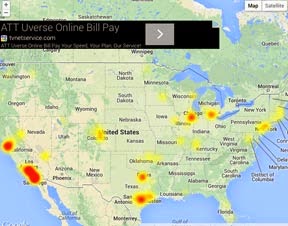 Fortunately, our wifi service is not through AT&T, so at least we had internet access.  I decided to check and see if there was any kind of notification on the web.  The only thing I found was a detection map on a remote AT&T page that showed significant outage in several areas... first signs seemed to show it extended across Texas, across California, Atlanta and Chicago.  One site was flooded with unhappy AT&T customers.  They had been given conflicting excuses by phone reps, and they were angry.  Apparently, one customer got ahold of a rep with a conscience, who told them that it was nationwide, but AT&T was keeping it hush-hush.
But does anyone find it just a little suspicious that it only seems to be Houston, Dallas, San Francisco, Los Angeles, Chicago, Atlanta and New York that are out, including areas that range out from these hubs -- and there is no mention of it from the major news sources or anywhere on the web, except for comments and discussions in chat rooms?
Is it a glitch in their system, or is it a major computer hack?  Is it a solar flare, or something more sinister?  All I know is it is highly suspect and I'm wondering if we will be told the truth.  This was no ordinary outage!

UPDATE:  Phone service came back on at 9:36 pm.  Let's see if there is any mention from any creditable news source.  It will be interesting to see if there is an attempt to explain this incident, or if it is merely ignored.  Inquiring minds want to know!

Proverbs 18:17   "The one who states his case first seems right, until the other comes and examines him."

Email ThisBlogThis!Share to TwitterShare to FacebookShare to Pinterest
Labels: Media