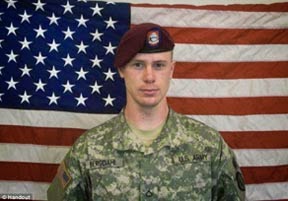 Although it is way too early to know the full story of Army Sgt. Bowe Bergdahl's release by the Taliban -- if we will ever know the full story or the truth -- I have some immediate and conflicting thoughts.  I am aware that what I think has no real value in this dialogue, other than mentioning some inconsistencies and concerns over this development.
Bergdahl was the only American POW held by the Taliban.  He was held prisoner for five years, and I cannot imagine the joy of his family to know that he will soon be back on U.S. soil.  And we can all share the jubilation felt by his hometown of Hailey, Idaho as they are finally able to remove the public display of yellow ribbons.
Images that crept out through the years were highly emotional, and patriotic Americans prayed and petitioned for his release.  After all, it has long been the position of the US military that "we leave no man behind."
Yet was the price too high for Bowe to come home?  In exchange for Bergdah's freedom, The Weekly Standard has reported that our nation has released "five of the most dangerous Taliban commanders in U.S. custody."  Furthermore, all five are among the Taliban’s top commanders and are still revered in jihadist circles.  Known as the "Gitmo 5", they became pawns in the White House's strategy to coerce the Taliban to break from their Al Qaeda counterparts.  Although, the administration is offering assurances that they do not pose a threat to American national security, are you willing to take that bet?
There's a part of me that celebrates this picture of a lone American soldier being worth five evil Taliban.... that our culture would value the life of one innocent man, and that God would honor our intentions and protect us from any further injury by the Gitmo 5.  But is it a picture that's even real?
Ever since Sgt. Bergdahl disappeared in Afghanistan, there have been rumors that, at the worst, he was a defector; and at the least, he was disillusioned with the Army and "ashamed to be an American."  The military is abuzz in various chat rooms with theories put forth by his comrades-in-arms.   The problem is that I am hard-pressed to trust any report on this situation.  Information can be placed anywhere by anybody, and all of it can be false.
There have been recent reports that Bowe may struggle with the ability to speak English, after years of speaking Pashtun.  And there are sincere concerns that he could have been programmed to become a Taliban sympathizer, and this is all a plot to return him to wreak havoc on the homeland.  Granted, this sounds seriously conspiratorial --  and is even the plot of a major TV show -- but one has to consider his state of mind when he was captured.  Whether willingly, or not, we cannot dismiss the possibility that Sgt. Bergdahl might feel empathy or sympathy with his captors after these five long years.  The "Stockholm Syndrome" is a proven psychological effect of prolonged imprisonment.
But now, let's take our eyes off the freed prisoner for a moment and consider the consequences of his release.  Several members of Congress are now questioning if the President broke the law in securing Bergdahl's freedom.  To be exact, he failed to notify Congress 30 days before the deal was made, as the President is required to do.  Further, no less than former U.N. Ambassador John Bolton has questioned the move as raising the value for future American prisoners.  He points out that it is not only our military at risk, but others such as missionaries, aid workers, and tourists. And in a joint statement, House Armed Services Chairman Howard P. “Buck” McKeon, R-Calif., and Senate Armed Services Ranking Member James Inhofe, R-Okla., told ABC News, “Trading five senior Taliban leaders from detention in Guantanamo Bay for Berghdal’s release may have consequences for the rest of our forces and all Americans. Our terrorist adversaries now have a strong incentive to capture Americans. That incentive will put our forces in Afghanistan and around the world at even greater risk.”
So, while I celebrate the release of Bowe Bergdahl from his Taliban imprisonment, I want to know that there won't be serious repercussions and further lives lost.  I realize that this is an irrational and unrealistic expectation.  And I don't like thinking that this one man's life is disposable for the greater good of the country.  I believe that God views every life as valuable; every life as redeemable ... and no matter what Bowe's truth is, I pray that the fact of his release will bless him greatly and bless his family, his hometown and his country.

2 Timothy 2:25-26    "God may perhaps grant them repentance leading to a knowledge of the truth, and they may come to their senses and escape from the snare of the devil, after being captured by him to do his will."
Posted by Pam Kohler at 7:00 AM