Have We Lost The Legacy of D-Day? 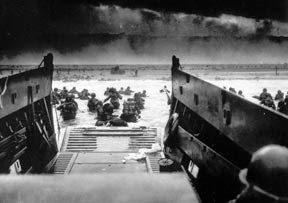 It has been 70 years since Allied forces stepped foot on the beaches of Normandy and changed the course of history.  Known as D-Day, this is a generic military term for the day on which a combat attack or operation is to be initiated.  As detailed in The Atlantic, June 6, 1944 is one of the most famous D-Days, and saw the largest amphibious invasion in history take place. Nearly 200,000 Allied troops boarded 7,000 ships and more than 3,000 aircraft and headed toward Normandy, France.  Some 156,000 troops landed on the French beaches; 24,000 by air and the rest by sea, where they met stiff resistance from well-defended German positions across 50 miles of French coastline.
Frankly, I was amazed to discover that there are no exact figures for casualties on that momentous day.  The numbers vary and are taken from the rough and approximate estimates made on the ground during the battle.  Conservative calculations have put the total figure at 9,000 casualties, with U.S. forces suffering over half of the casualties; the British, nearly a third; and the Canadians experiencing the balance.  British statistics quote a figure closer to 11,000 dead.
As this historic day begins to fade in the memory of the American experience, it is my fear that this, and future, generations will lose sight of the significance of the great accomplishments by our brave men on those foreign shores.  For those of us who have seen the movie Saving Private Ryan, we have a taste of what it must have been like to storm the beaches under heavy enemy fire.  I have read about survivors who describe the seas that day as "blood-red and full of floating bodies". 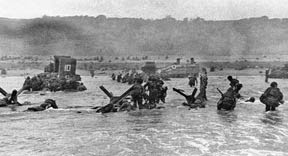 When you read the first-hand accounts of those who assaulted Utah and Omaha Beaches, you are hard-pressed to see how anyone could have survived.  One narrative described it this way:  "As soldiers struggled, one leader told his men that two types of people would stay on the beach--the dead and those going to die."  They had to storm those beaches and push on --- so they did.  And because of their actions that day, brave American soldiers persisted in their mission to halt Nazi Germany's drive for world domination; and the invasion at Normandy was their first step towards victory in Europe.  Without their participation, a free Europe would no longer have been possible.
Little did these men know that, in essence, they were part of something even bigger.  The part they played in the war would eventually serve to catapult America on her historical path toward an enduring role in global affairs, a prominent presence in post-war Europe, and its first major alliance with world powers.  Their sacrifice on that historic and devastating day was symbolic of the impact America would have on the world for decades.  It was and is an honorable legacy.
But, as sad as it makes me, I must ask this question .... Have we squandered that glorious legacy? Are we that same America that embodied freedom to millions of Europeans?  History records that one week shy of her 15th birthday, an excited Jewish girl in Amsterdam named Anne Frank described in the June 6th, 1944 entry to her diary how she and her family huddled around a radio in their attic hideaway to hear details of the invasion.  "This is the day," she wrote. " . . . I have the feeling friends are approaching."
Are we still seen as "friends" by those who believe in freedom and sovereign nations?  Yes, the legacy still existed when this country helped secure the collapse of Communism in Eastern Europe a mere 45 years later.  We were still seen as the bastion of hope and promise.  But do our allies still look upon us with that same optimism and trust?  Have we continued the Greatest Generation's legacy of "exceptionalism" over these last 25 years? 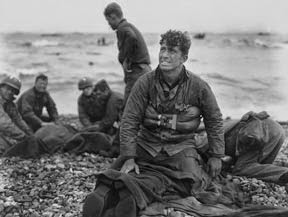 Those white crosses in the American Cemetery and Memorial at Colleville-sur-Mer, Normandy, France, are a picture of the real meaning of American "exceptionalism".  Don't be fooled ... It is not what was spoken of recently at West Point:  our willingness to affirm international norms.  Americans do not fit a conventional mold .  We never have and it is my sincere hope that we never will.
And we must never forget that what those men accomplished on those beaches 70 years ago was not "normal"; it was truly exceptional.  And I am afraid that as the last of them leaves this earth, we will lose another signpost of our remarkable and unparalleled American character.  I pray that we can maintain a remnant of their bequest to us; that as long as we nurture their memory, we stand a chance to reproduce the hope they offered the world.  In many ways, 70 years seems so long ago; literally, a lifetime.  But look how quickly we have wasted what cost them so much.  They deserve our efforts to preserve their legacy, and only with God's help can we repay the price.

Psalm 33:12    "Blessed is the nation whose God is the Lord, the people whom He has chosen as His heritage!"