The World Health Organization released a frightening report on the state of public health.  For years now, we have been warned that our love for antibiotics would eventually result in their ineffectiveness. Apparently, that time is on our doorstep.  This forecast is no longer merely a threat; according to WHO's latest report, it is happening right now in every region of the world and has the potential to affect anyone, of any age, in any country. They say it loud and clear ... Antibiotic resistance–when bacteria change so antibiotics no longer work in people who need them to treat infections–is now a major threat to public health.
The WHO bases this announcement on analysis of data they received from 114 countries, world-wide.  To me the most startling news was the reality of antibiotic resistance in seven different bacteria responsible for common, serious diseases such as bloodstream infections (sepsis), diarrhea, pneumonia, urinary tract infections and gonorrhea. 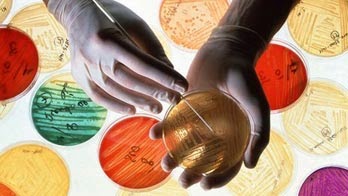 Dr Keiji Fukuda, WHO’s Assistant Director-General for Health Security, made this statement:  “Without urgent, coordinated action by many stakeholders, the world is headed for a post-antibiotic era, in which common infections and minor injuries which have been treatable for decades can once again kill.”  Look at it this way ... there could soon come a day when you get an infection from a cut or scrape you received working around your house or garden, and it could kill you.  Think I'm exaggerating?
Dr. Fukuda went on to say, “Effective antibiotics have been one of the pillars allowing us to live longer, live healthier, and benefit from modern medicine. Unless we take significant actions to improve efforts to prevent infections and also change how we produce, prescribe and use antibiotics, the world will lose more and more of these global public health goods and the implications will be devastating.” [my emphasis].
But think about it.  We all know someone who rushes to the doctor with every sniffle, headache and upset tummy.  They refuse to leave the doctor's office without a prescription for an antibiotic; whether they need it or not.  They have what I call "the magic pill" syndrome.  They are not willing to let their body heal itself in time.  It's just part of our instant gratification, gotta have it now, culture.  And we will pay the price.
The key facts of this report were nothing less than astonishing and certainly alarming.  The report focused on the ineffectiveness of "last resort" antibiotics; those given when everything else has been tried.  These are just some of the findings:
•  Carbapenem antibiotics have long been used as a last resort to treat life-threatening infections caused by a common intestinal bacteria, Klebsiella pneumoniae.  Now the WHO reports that resistance to this family of antibiotics has spread to all regions of the world.  K. pneumoniae is a major cause of hospital-acquired infections such as pneumonia, bloodstream infections, infections in newborns and intensive-care unit patients. In some countries, because of resistance, carbapenem antibiotics would not work in more than half of people treated for K. pneumoniae infections.
•  Another family of antibacterial medicines -- fluoroquinolones -- were hugely effective in the 1980s, when these drugs were first introduced, and resistance was virtually zero.  They were commonly prescribed for the treatment of urinary tract infections caused by E. coli.  Now today, because of overuse, there are countries in many parts of the world where this treatment is now ineffective in more than half of patients.
•  Did you know that more than 1 million people are infected with gonorrhoea around the world every day?  Third generation cephalosporins were the "go to" drug for treatment of this serious disease.  If untreatable, gonorrhea can eventually lead to joint infections, heart valve infections, and infections around the brain (meningitis).  Now consider the implications when these antibiotics fail to cure the disease, which is happening in Austria, Australia, Canada, France, Japan, Norway, Slovenia, South Africa, Sweden and the United Kingdom.
•  Antibiotic resistance causes people to be sick for longer and increases the risk of death. For example, people with MRSA (methicillin-resistant Staphylococcus aureus) are estimated to be 64% more likely to die than people with a non-resistant form of the infection. Resistance also increases the cost of health care with lengthier stays in the hospital and more intensive care required -- which increases your chance of getting more infections!
It appears that the World Health Organization took their fact-finding mission seriously.  They compiled data and reported on the regions of Africa, the Americas, the Eastern Mediterranean, Europe, Southeast Asia, and the Western Pacific ... and they came up with a common thesis:  treatment with standard antibiotics do not work, and drug resistance must become the highest priority of health agencies around the world.
And in case you're inclined to dismiss this report as a method to encourage the development of even more antibiotics for the drug industry (I will admit, not easily shrugged off), please read what England's Chief Medical Officer Dame Sally Davies had to say.  She described the growing resistance to antibiotics as "a ticking time bomb", and said the danger should be ranked alongside terrorism on a list of threats to the nation.  That's enough incentive for me to try to build my immune system as strong as it can be, and to develop a health regimen to avoid infections whenever possible.  The rest is up to the Good Lord.

Revelation 6:8    "I looked up and saw a horse whose color was pale green. Its rider was named Death, and his companion was the Grave. These two were given authority over one-fourth of the earth, to kill with the sword and famine and disease and wild animals."