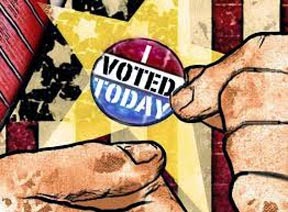 Did you know that there is a movement to legally bypass the Electoral College in the voting process?  Neither did I, because it is silently and stealthily being accomplished behind the scenes and without any mention by the media.  In fact, this campaign is nearly 61% of the way towards accomplishing its goal.
According to World Net Daily, the National Popular Vote (or NPV bill) is gaining steam as it seeks to obtain the consent of the majority of the 538 votes in the Electoral College.  If successful, this scheme would award electoral votes to the winner of the national popular vote instead of the winner of the popular vote in each state.
Here's how it is happening:  The National Popular Vote Interstate Compact (NPVIC) is an agreement among various U.S. states and the District of Columbia to replace their current rules regarding the apportionment of presidential electors with rules guaranteeing the election of the candidate with the most popular votes in all fifty states and the District of Columbia. Coming in the form of an interstate compact, the agreement goes into effect once it is law in states, that together, have an absolute majority of votes (at least 270) in the Electoral College.
And here's how it gets interesting:  According to Wikipedia, an interstate compact is an agreement between two or more states of the United States of America. Article I, Section 10 of the United States Constitution provides that "no state shall enter into an agreement or compact with another state" without the consent of Congress.
Consent can be obtained in one of three ways. First, there can be a model compact and Congress can grant automatic approval for any state wishing to join it, such as the Driver License Compact. Second, states can submit a compact to Congress prior to entering into the compact. Third, states can agree to a compact then submit it to Congress for approval, which, if it does so, causes it to come into effect.
Frequently, these agreements create a new governmental agency which is responsible for administering or improving some shared resource such as a seaport or public transportation infrastructure. In some cases, a compact serves simply as a coordination mechanism between independent authorities in the member states.
Now, I don't know about you, but it seems as if some how, some way, Congress has to give their consent if it is an interstate compact.  Yet it is implied that once the National Popular Vote bill becomes law in the states, it goes into effect.  So, I'll just admit it ... I'm confused.  But I have no doubt that this is all carefully planned and there is a mechanism to bypass Congress as well as the Electoral College.
Last month, New York became the 11th state to enact the plan, joining Hawaii, Illinois, Maryland, Massachusetts, New Jersey, Washington, Vermont, California and Rhode Island. The District of Columbia also has joined the pact.
Notice anything distinctive, or the common denominator, among this group of states?  They are all states that vote primarily Democratic in the national elections.  So what do they have to gain by implementing the NPV?  The plan simply requires that enough states join through votes in their legislatures along with gubernatorial approval, and the effort would change the way Americans elect the president, without amending the U.S. Constitution.  Remember, it takes two-thirds of both the House and Senate to pass a constitutional amendment to repeal the Electoral College.  That would be nearly impossible; it would never receive bipartisan support.
But the NPV minimizes the number of states that would need to agree, thereby circumventing the constitutional amendment process.  It's a brilliant plan!  You see, once enough states agree to allot their  electoral votes to the national popular vote winner, the Electoral College becomes irrelevant.
I don't suppose you'd be surprised to discover that the National Popular Vote group is fully partnered with the Center for Voting and Democracy, or that this group is funded by George Soros, would you?  Didn't think so.  Here's the beauty of the scheme ... only 14 states – those with the largest populations – could decide the presidency for voters in all 50 states.  Which is exactly why our Founding Fathers sought to find a balance between electing our President by popular vote, and electing him by the vote of Congress.  Unlike today, they wanted elections to be fair and equitable.  They saw the danger in allowing the larger states to have more power than the smaller states.
Even John F. Kennedy rejected this idea when he said, “Direct election would break down the federal system under which states entered the union; which provides a system of checks and balances to ensure that no area or group shall obtain too much power.”  I guess that says it all ... and it's all about power ... anyway they can get it.
Can this plot be stopped?  I honestly don't know.  I guess if the citizenry of each state knew where their governor stood on this matter, we'd have a better idea if this back-door scheme will come to fruition.  But do not doubt that this is the ultimate design, and why the back room powers have been so intent on changing states like Texas from red to blue.  Couple this plot with voter fraud and I don't see how they can be stopped.  If God is the true determiner of who has authority over us, as the book of Romans tells us, then He is surely using them for judgment against our sinful ways.  I cannot disagree that we deserve it.  I pray that He hears the voices of we the people, who repent and ask His forgiveness.  Otherwise, our darkest hour is yet to come.

Psalm 52:2    "All day long your tongue has plotted unrighteousness; like a sharpened razor you have crafted deceit."