Under The Red Blood Moon 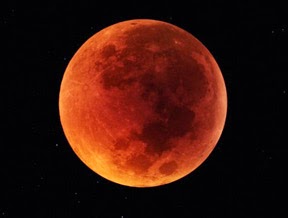 All you astronomy buffs are likely aware that we will experience a unique show in the sky during the next year, beginning in the middle of this month.  To be exact, there will be a total lunar eclipse in which the moon enters the shadow of the earth, and all the rays of the sun are blocked from its surface.  What makes this event so spectacular is that all of the sunsets and sunrises in the world will be experienced at once, refracted onto the surface of the moon, resulting in what is called a "blood moon."
But what makes this occurrence even more astounding is that it will occur FOUR TIMES in the next year.  And if that is not enough to knock your socks off, each time it happens it is on one of the Lord's Feast Days!  Even if you are not a Believer, can you really attribute this phenomenon to coincidence?
What is fascinating to me is the dual significance of the moon.  By that, I mean that it is a scientific fact that the cyclical nature of the moon is related to the rhythms of life.  How many of us have heard of the effects of the moon on our reproductive cycles; the planting of crops; and the rise and fall of crime statistics.  I, for one, always have a hard time sleeping during a full moon phase.
The moon has also been significant in many religions, dating back centuries.  In Christianity and Judaism, the relevance of the moon is stated in Genesis 1:14:  And God said, Let there be light in the heaven to divide the day from the night; and let them be for signs, and for seasons, and for days, and years.  In Islam the moon is considered to be one of the two signs of Allah, along with the sun. An eclipse of either, is taken as a reminder of the “Day of Judgement,” and is hence dedicated to prayer, and remembering Allah.  So through their Holy Books and writings, all three of the major world religions (Christianity, Judaism, and Islam) recognize that the sun and moon are meant to be signs to them by their God.
Therefore, it is not hard to see that this tetrad of four Red Blood Moons occurring in succession is a pretty big deal.  But here is an absolutely astounding piece of information... there have been tetrads throughout history, yet every time the Blood Moons have fallen on a Feast Day of the Lord, as proclaimed in the Torah/Bible, something prophetical has happened to the nation of Israel.
You might think that could be contributed to chance, but let me inform you of some facts that are pretty convincing.  In 1492, the Jews were expelled from Spain, as a pet project of the Spanish Inquisition.  In fact, Columbus's diary begins with, "In the same month in which their Majesties [Ferdinand and Isabella] issued the edict that all Jews should be driven out of the kingdom and its territories, in the same month they gave me the order to undertake with sufficient men my expedition of discovery to the Indies."  Four blood moons are associated with the Feasts of Passover and Tabernacles during that time period (1493-94), and when the Jews were also expelled from Portugal.  The date that this edict took place was the Jewish holiday known as the 9th of Av on the Jewish calendar, a day of mourning to commemorate the many tragedies that have befallen the Jewish people.
If you need more proof that dates are important in our religious history, consider all these events that occurred on the 9th of Av:  The First Temple was destroyed on the 9th of Av, 423 BC;  the second Temple was destroyed on the 9th of Av, 70 AD; the Jews were expelled from England on the 9th of Av, 1290 AD; Germany declared war on Russia on the 9th of Av, 1914, beginning WW I.  Historians believe that WW II and the Holocaust were direct results of unresolved matters from the first war. 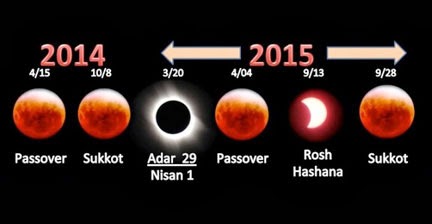 But this is all based on a Jewish calendar, you say.  We adhere to the Gregorian/Julian calendar.  But remember that Biblical quote from Genesis 1:14?  God is telling us that He created the sun and the moon as signals to us; and He clearly commanded that His Feast Days be ordained on (and followed according to) certain patterns.  He gave the Jews a calendar based on the lunar cycles.  And it makes perfect sense ...  the days of the moon (month) and the days of the week line up perfectly, week-to-week and moon-to-moon. This makes the Jewish 13 Moon/28-day calendar a perpetual calendar.
The Egyptians, Druids, Incas, Polynesians (etc.) and even the Mayans (which had the most complex and correct calendar in history) used the 13 Moons (Months) calendar. In fact, almost every single indigenous tribe on Earth used the 13 Moon Calendar, including Native Americans.  But now, we follow the Gregorian (Sun/30-day) calendar, which essentially puts us out of sync with God's perfectly aligned Universe!  When you realize that the Moon is a very important part of God's framework, then these tetrad moons we're about to experience take on even more importance.
Let's go back to the historical messages of the tetrad.  So, we had 4 blood moons associated with the period when the Jews were expelled from Spain and Portugal.  Although, there were 7 tetrad blood moons in the 1500's, none of them fell on a Feast Day or holiday.  There were no blood moons in the 1600s, 1700s, or 1800s.  But wouldn't you know it, the tetrad event only occurred twice in the last century: in 1949 & 1950, then in 1967 & 1968. In each case, the 4 total Lunar eclipses occurred in succession on the Feasts of Passover and Tabernacles two years in a row. The dates were April 13th and October 7th, 1948 and April 2nd and  September 16th, 1950. The second tetrad occurred on April 24th & October 18th, 1967; then April 13th & October 6th, 1968. It is interesting that the first tetrad of Lunar eclipses in the 20th century occurred immediately after Israel became a nation on the 14th of May, 1948, and the second tetrad surrounded the return of the Old City of Jerusalem to Jewish control on the 7th of June, 1967. It was the first time in 1800 years the Jews had stepped on the Temple Mount.  Both events were prophetical.
So do you want to guess on what days the upcoming tetrad takes place?  If you guessed the Feasts of Passover and Tabernacles, you would be correct!  To be exact, they occur on April 15th (Passover) and October 8th, 2014 (Tabernacles); and then April 4th (Passover) and September 28th, 2015. (Tabernacles).  So, for me it does not take a huge leap of faith to realize that these Feast Days were established by the Lord as a pattern for us to look to and recognize.
Consider these additional facts:  Jesus's First Coming occurred on the Spring Feasts (He died on Passover, was buried on the Feast of Unleavened Bread, and resurrected on the Feast of Firstfruits), and it is widely believed by many Bible scholars and the faithful that His Second Coming will occur during the Fall Feasts.  The Feast of Trumpets celebrates the coronation of the coming King; the Day of Atonement represents a day of forgiveness of sins; and the Feast of Tabernacles celebrates deliverance and God residing with us.  Now, the fact that there are blood moons on these upcoming Feast Days, and historically, something prophetic has happened to the nation of Israel when this phenomenon occurs, it should make all of us sit up and take notice.
Unlike the skeptics who attribute this event to "unusual atmospheric conditions", to most religious and spiritually-inclined people it will be a time for worship, prayer, wonder, and undoubtedly a sight to behold.  I don't know about you, but I will be excited to witness the first of the four blood moons in two weeks.  And I do not doubt that God is saying, "Here, I have given you this knowledge.  It is in plain sight.  Is anybody paying attention?!"  We can only guess what prophetic event will take place and how it will affect Israel.  But God and history have shown us that we can expect it to be extraordinary!

Joel 2:31    "The sun will be turned to darkness and the moon to blood before the great and awe–inspiring Day of the Lord comes."

Revelation 6:12    "Then I saw Him open the sixth seal. A violent earthquake occurred; the sun turned black like sackcloth made of goat hair; the entire moon became like blood;"
Posted by Pam Kohler at 7:00 AM