It's hard to describe my feelings about yesterday's shootings at Fort Hood.  Once again this Army Post will come under heavy scrutiny, and families will be suffering.  So many questions to be answered ... was PTSD a contributing factor?  Is it terrorism?  Isn't it time to change the Army's "gun free" policy, which leaves our service members defenseless in incidents such as this?  How many innocent victims have to die before the Military Brass see the absurdity of such a stance?
I actually heard the Commander of Fort Hood, Lt. General Mark Milley, say that he would not consider letting Army personnel carry weapons on Post because, as in this instance, they had excellent military police and law enforcement that responded within 10-15 minutes.  I don't have any stars on my chest, but even I know that a lot of lives can be lost in 10-15 minutes, and even one well-trained soldier at the scene can take out an active shooter in seconds. 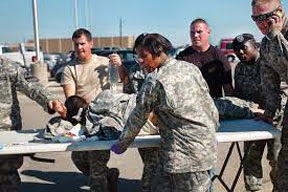 To my mind, we have once again shown the world (and anyone wishing to harm our military) that we are vulnerable; we appear weak; and we aren't even capable of protecting our soldiers on their home turf.  When does this madness stop?
Then we have to face the issue of the psychological profile of the shooter.  He was an active-duty soldier who was being treated for "behavioral problems, anxiety and depression."  He was undergoing testing for PTSD, and although not officially diagnosed to date, one has to wonder if multiple deployments and wars that have lasted over a decade played a part in this incident and will contribute to more tragedies such as this.
And then there is the Commander-in-Chief's response.  He issued a statement which said, ""We're heartbroken something like this might have happened again.  We're following it closely. ... I want to just assure all of us we are going to get to the bottom of exactly what happened."  These comments were part of a brief statement he made while on the way to a fund-raising event for the 2014 election cycle, in which some tickets were going for $32,400 apiece.  After all, we must keep out priorities straight, right?  I just find it curious which shooting tragedies are on his radar (such as Sandy Hook) and warrant countless press conferences, and which ones receive the least attention with just an issued statement (any shooting which involves the military).
The nation is reeling from this latest domestic attack upon our service men and women, and as the days go by, I hope we will receive answers to the gut-wrenching questions.  But for those of us who care deeply about the soldiers that put their lives on the line for us, it is difficult to think that they are so susceptible to attack without any means to protect themselves.  They deserve better than this and the top of the military chain of command should be ashamed and embarrassed that our brave Soldiers, Sailors, Marines,  and Airmen are still defenseless sitting ducks!  The nation is waking up to the fact that we must consider armed teachers to protect our children; why not allow armed soldiers to protect themselves?  Enough of this foolish insanity!  May God protect and bless those who protect us; and may He heal and comfort all those who have been affected by this tragic event.