That familiar refrain may soon become the anthem of Westerners who are seeking to regain poorly managed lands under the care of the Federal government and the Bureau of Land Management.  Long displeased with the way the Feds have handled the operation of the lands, both environmentalists and ranchers are lodging complaints.
According to The Christian Science Monitor, a group of environmentalists recently filed a notice of intent to sue the BLM for failing to report impacts to the desert tortoise and similarly threatened and endangered species from off-road vehicles, cattle grazing and other activities in California.

Meanwhile, for the last three or four decades, Western states have long argued that taking back control of parts of wide tracts of federal land means the land would be managed better, and their state  economies would improve.  In fact,  The Salt Lake Tribune reported last Friday that political leaders from nine Western states convened for the first time to talk about their joint goal of wrestling control of oil, timber and mineral-rich lands away from the U.S. government.  As evidence of this, Idaho Speaker of the House Scott Bedke argued that Idaho forests and rangeland managed by the state have suffered less damage and watershed degradation from wildfire than have lands managed by federal agencies.
Just consider these facts as outlined by the Congressional Research Service:  If you include the US Bureau of Land Management, the US Forest Service, National Parks, and military bases, then the Federal government controls the following percentage of lands in Western States ... Nevada - 81%, Alaska - 62%, Utah - 67%, Oregon - 53%, Idaho - 62%, Arizona - 42%, California - 48%, Wyoming - 48%, New Mexico - 35%, and Colorado - 36%.  All we have to do is look at how well they manage our Federal budget, the welfare system, and the healthcare system, and we get a pretty good idea how conservatorship of our land is being administered.
Here's the deal ... our land is important for supplying our food and energy needs.  The stability of the country depends on it.  And when the fate of a spotted owl or some rare species of desert vegetation comes before the nation's prosperity, then something is wrong.  So now the governing officials of the Western states are getting serious about demanding the releasing of titles to certain lands that exclude national parks and wilderness study areas.  The Deseret News,  out of Salt Lake City, reports that the “Transfer of Public Lands Act,” signed into law by Utah Gov. Gary Herbert in 2012, has set the stage for a formal showdown with the government by demanding action under threat of lawsuits.  And the recent meeting of officials from the other states probably means more will be signing on to this form of protest.
There is an even more rancorous situation brewing on the border of Texas and Oklahoma.  Breitbart.com reports that government has turned its focus on 90,000 acres along a 116-mile stretch of the Texas/Oklahoma boundary. The BLM is reviewing the possible federal takeover and ownership of privately-held lands which have been deeded property for generations of Texas landowners.  What is scary is that the government is going to use a decades-old case to prove preeminence in doing just that.
In 1986, rancher Tommy Henderson lost a case where the BLM attempted to seize some of his land. Henderson sued the BLM and lost 140 acres that had been in his family for generations. Now the BLM is looking at using this prior case as a precedent to claim an additional 90,000 acres. 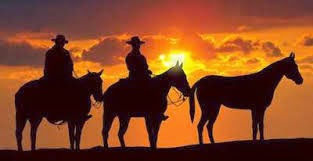 And there's a bit of interesting history that accompanies this unique situation.  Using the Red River as the defining boundary line between the states of Texas and Oklahoma has been surrounded in controversy for generations.  The various forms of movement of the river have caused no end to the conflict.  Currently, the Texas Farm Bureau asserts the State of Oklahoma believes that whenever the river shifts south, the state line moves south. But when the river moves north, the line remains in place. Now, the BLM seems to want to settle the matter by simply confiscating the land.  So how do you think that's going to go over?
I pray that cooler heads will prevail and the Government doesn't try to force this issue.  The sad thing is that, in no way, can bureaucrats understand the relationship between a rancher and the land.  Since the mid-18th century, the great stretches of largely-arid territory west of the 100th meridian, splitting the Dakotas and running down through Texas, have been home to hardy pioneers, farmers and ranchers who have done a pretty darn good job of taking care of one of our most precious resources ... the land.  All the federal government seems to have done is contribute bad policies, politicized scientific and environmental theories, and severe budget cuts that have all served to cripple the land's production. For the foreseeable future, I tend to stand with Utah State Representative Ken Ivory, when he says, "“It’s simply time [to take back the land]. The urgency is now.”

Isaiah 40:8    "The grass withers, the flower fades, but the word of our God will stand forever."