We Are Playing God 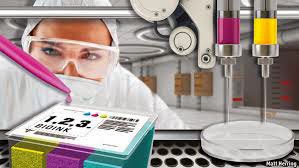 BreakingDeception.com has revealed that scientific work being conducted at Harvard’s Wyss Institute for Biologically Inspired Engineering, has now successfully created living tissue, using 3-D printers.  They may be "inspired", but I fear it is not by anything with which I wish to be associated.
Scientists will tell you it's all for the good of mankind; that one day surgeons might feed detailed CT scans of human body parts into a 3-D printer, manipulate them with design software, and produce healthy replacements for diseased or injured tissues or organs.  But it is this statement that scares me to death:  Their work represents a significant advance toward producing living medical models upon which drugs could be tested for safety and effectiveness.  And what's to keep them from engineering complete humans, instead of just "replacement parts"?
Does anyone else think this sounds as if we are playing God?  As if we are mimicking God's creation?  The article lays out how this living tissue is constructed:  The scientific team produces three “bio-inks” that are laid down by separate printer heads. One ink contains extracellular matrix, a complex mixture of water, proteins and carbohydrates that connects individual cells together to form tissues. Another contains extracellular matrix and living cells. A third used to make the vessels unusually melts as it cools so that researchers could chill the sample and suck out the ink to leave behind hollow tubes.  The team then "seeds" the hollow tubes with endothelial cells, which grow into blood-vessel lining.  Sounds like manipulation of God's unique creation to me!
This sounds eerily like what Satan promised Eve in the garden ... just take a bite out of this apple and you can know what God knows!  Why should mankind be limited to the whims of its Creator when it can re-create itself?!?
Because does anyone sincerely believe that man, in all his egotistical self-absorption, will not exploit  this new invention to make himself more perfect and eliminate the eventual decay of the body?  And in doing so, will this not eliminate his desire for, and his need for, God?
It seems to me that we have forgotten that we were created to glorify God; made in His image and for His pleasure.  He didn't create us because He needed us.  And He didn't create us to be equal to Him.  And that is my concern about the advancement of this technology.  If man can make himself physically perfect by grafting in new tissue and body parts, so that there is no possibility of dying, he can live forever.  That leads us to this question: Why would he ever have the need to know His original Creator?
I realize that everything is under God's control, and perhaps it will be His will that this technology can serve mankind without corrupting his soul.  But I also know that the Enemy will use everything in his power to convince us that this technology will make us equal in power, intelligence, and perfection to God.  That will not happen; God will not allow it.  So, I just feel as if we are playing with fire, and I wonder if we have the discernment (or the desire) to know when we've gone too far.  None of us want to suffer illness or die, but I want nothing to do with science that will deny me eternal life God's way.

Deuteronomy 4:35      "To you it was shown, that you might know that the Lord is God; there is no other besides Him."