To be honest, I don't have anything but the most elementary understanding of what is going on in Crimea. But maybe that's where most of the truth lies; because I don't believe that the Kremlin, the White House, or the Media is presenting an unbiased or accurate report of what is unfolding.  That seems pretty obvious when the back and forth between the Super Powers only creates a murky image wrought by political machinations.  Thanks to the BBC Europe offices, I will attempt to provide a very basic view of why Crimea is such an important news story. 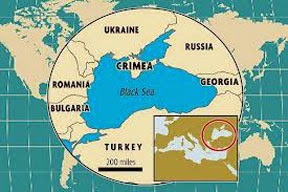 On a purely historic level, one can get a pretty good picture of an underlying source of conflict.  Crimea is a region in the far south of Ukraine, and is situated as a peninsula on Ukraine's Black Sea coast.  The country of Ukraine came into existence in 1991, with the breakup of the old Soviet Union.  Within, Ukraine's population of 44.6 million people, Crimea is home to somewhere around 2.3 million people; a majority of whom identify themselves as ethnic Russians and speak Russian.  This region voted heavily for the recently deposed President Viktor Yanukovych, and in fact, many of them believe he was the victim of a coup (probably fostered by the West) after he refused to sign an association agreement with the European Union.  They think that this event gave the separatists in the Crimean parliament the opportunity to engender a vote for joining the Russian Federation and a referendum on secession from Ukraine.
The demographics of the Ukrainian population lends some credence to this theory.  Ethnic Ukrainians make up 24% of the population in Crimea according to the 2001 census, compared with 58% Russians and 12% Tatars, who are Muslim and were once the majority before being deported in large numbers by Soviet leader Joseph Stalin in 1944 for alleged collaboration with Nazi invaders in World War Two.  (The irony of that fact is that Stalin was, himself, the biggest collaborator with Nazi Germany and rivaled Hitler with his extermination of "undesirables" -- but that's rarely admitted in today's revisionist history lessons and an entirely different subject matter).
Crimea's attachment to Russia goes back over 200 years, when it was annexed by the Mother Country in 1783.  Moscow held the dominant power over Crimea until they ceded it to Ukraine - then part of the Soviet Union - in 1954.  That has been a serious point of contention for the ethnic Russians in the region.  So, as you can see, there is certainly some evidence and an emerging picture of a region whose population is primarily Russian, speaks Russian, and considers themselves Russian; therefore viewing annexation by Russia as a good thing.
What is not being made clear to the general population in the West, through their media outlets, is that Crimea is an autonomous republic within Ukraine, electing its own parliament, with a prime minister appointed with approval from Kiev.  So now those members of the Crimean parliament have appointed a pro-Moscow leader, Sergei Aksyonov, who wants Crimea to unite with Russia, and called for a referendum to be put before the voters.  They were asked to vote between two choices:  1) Are you in favor of re-uniting Crimea with Russia as a constituent part of the Russian Federation?  2)  Are you in favor of restoring the Constitution of the (autonomous) Republic of Crimea of 1992 and retaining the status of Crimea as part of Ukraine?  The results of the March 16th referendum were reported by election officials:  97% of voters had voted in favor of joining the Russian Federation; local media alleged voter fraud, while some feared that Russia was orchestrating violence in Eastern Ukraine as a pretext to invading those regions.
The heads of government in Ukraine's capital of Kiev declared this referendum to be illegal (although in the Ukrainian constitution, Crimea is allowed local referendums).  The UN's Security Council attempt to pass a resolution that would make the referendum null and void was vetoed by Russia.  And now the West has declared that they will not recognize the results of the referendum.
But does the West really have the right to condemn or control this turn of political events (especially if they had a hand in orchestrating it)?  Would the citizens of Wisconsin want Germany, for instance, telling them that their contested election of Scott Walker was invalid?  We experienced the same political battles between segments of the population as Crimea.
I know that this is a rather simplistic view, and Wisconsin did not have troops amassed on their border, but it's never a good idea when we stick our noses in the business of other countries.  As for Russia's interpretation of the situation, their defence laws allow military action overseas to "protect Russian citizens" -- just as ours do.  Furthermore, President Vladimir Putin has defended Crimea's decision to stage the referendum as "based on international law". 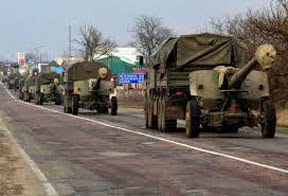 But here's the other side of the coin:  Through a series of Declarations and Agreements in the 1990s, Russia clearly recognized the existing borders of Ukraine (which includes Crimea).  But now Russia has multiplied its military forces in Crimea without the consent of Ukraine. It has allegedly deployed them outside of agreed military infrastructure; taking control over key installations, such as airports, and have even gone as far as surrounding Ukrainian units.  Looks an awful lot like an act of aggression to me!
So who is right?  Aren't the citizens of Crimea legally citizens of Ukraine, regardless of their Russian proclivities?  So isn't it Ukraine's responsibility to protect its citizens, and thereby making Russia's claim that it is "protecting Russian citizens" a reach?  Yes, Moscow claims that former President Yanukovych requested armed intervention during the recent riots in Kiev.  But since he was deposed by Ukraine's Parliament, he no longer legally represents the Ukrainian people and his request is invalid.  Conversely, the new Crimean regional authority, whose request for intervention was also cited by Russia, lacks the legal power to take such a step, since it is still a part of Ukraine.
This is why the situation in Crimea is so dangerous.  Who is going to blink first?  If Russia can somehow instigate the government of Ukraine into making a move in response to Russian troops on their border, then they can use the excuse of defending their troops and ethnic kin as a reason to escalate.  Does anyone think that Ukraine can stand up against the might of the Russian military?  And do we want to take that same gamble by interfering in this regional and ethnic conflict?  Isn't this conflict essentially a civil war between Ukraine and Russia?  Look how well we have managed to engineer these kinds of struggles in Syria and Egypt!
I guess my concern is that so many who know more than I do, are warning that we are sitting on the brink of another World War.  Will cooler heads prevail?  Or is this the hook that God puts into Gog's jaw that draws the world into Ezekiel's End Times prophecy?  We do not know the timing, but far be it from me to refute the possibility.  I only know that, ultimately, God is in control.  All I can do is pray, "Thy Kingdom come, Thy will be done!"

Ezekiel 38:4   "and say, 'Thus says the Lord GOD, "Behold, I am against you, O Gog, prince of Rosh, Meshech and Tubal. I will turn you about and put hooks into your jaws, and I will bring you out, and all your army..."