Is Religious Liberty Dying In Our Military? 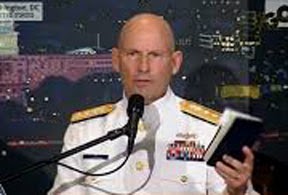 Nearly a year ago, Coast Guard Rear Admiral William Lee spoke from the heart at a National Day of Prayer breakfast.  At the time, Todd Starnes of  Fox News, reported on the Admiral's passionate speech regarding his religious faith.  “As one general so aptly put it – they expect us to check our religion in at the door – don’t bring that here,” Rear Admiral Lee told the gathering. “Leaders like myself are feeling the constraints of rules and regulations and guidance issued by lawyers that put us in a tighter and tighter box regarding our constitutional right to express our religious faith.”
Lee told the cheering crowd that he would defy any of those constraints.  “The problem that men and women like me face in uniform who are in senior leadership positions is that the higher you are – the more vulnerable you are to being taken down,” he said. “You get in the crosshairs of those people who lay in wait outside the gate – waiting to take us to task for expressing our faith.”
Yet Admiral Lee was bold in pronouncing that he would not back down from giving those under his command a word of hope.  “The lawyers tell me that if I do that – I’m crossing the line,” he said. “I’m so glad I’ve crossed that line so many times.”  I  urge you to watch the video of this brave's man stand for his faith, and his warning that there is a religious storm fast approaching the armed forces. 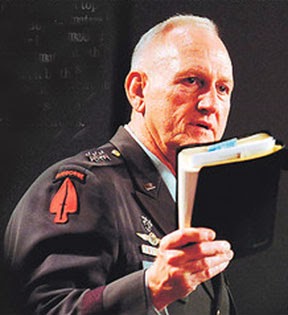 I have only touched on the highlights of this report by Lt. General Boykin, and I urge you to click on the link above to read his full and complete analysis of the state (or lack thereof) of Religious Liberty in our Military.   This is a man who has proudly worn the uniform of the U.S. Military, and achieved great things for this country during his stellar service.  But he is sounding an alarm that we can no longer ignore.  When you remove our God from our military, then you open the door to deviations and departures from moral and ethical principles.  Look how much the Enemy has been able to accomplish in just 10 short years!  If we do not stop this blatant discrimination, we may soon find that Christianity and Christians are no longer a part of our military.
Finally, I would like you to consider these words with which General Boykin ended his paper:  James Madison once described religious freedom as the "lustre of our country." The examples presented above should give us great concern that we have entered a period in which members of the armed services are being subjected to speech codes and restrictions on the free exercise of religion. We recognize that there must be a healthy respect for the beliefs of members of all faiths and those who are not Christian believers. Concurrently, we affirm that religious expression is a right foundational to our Constitution, which those being penalized have sworn with their lives to uphold.
Pray for our military.  Pray that the forces and the attacks by those who wish to silence the Christian influence will fall on deaf ears.  And pray that our leaders will once again promote the free practice of all faiths in this land, and re-discover our most sacred founding principle.