Have We Learned Anything From Fukashima?

I ask you, have you considered the impact of Fukashima on the U.S. homeland?  Or do you think it is so far away that it doesn't really concern us?  Are you willing to trust "government officials" with their "everything is OK" rhetoric?  Because I can promise you that for every assurance over the last three years that Fukashima has had no effect on sea life in the Pacific Ocean or on our Western coastline, I can produce a credible source warning us that the ramifications are serious and alarming.  I don't know about you, but if it is the government telling me that it's safe, then I'm probably going to rely on my own gut instinct, and every fiber of my being tells me something is fishy (pardon the pun).
If it is true, as reported by TruNews, that city officials in towns near Fukashima have warned parents not to allow children up to two years old to spend more than 15 minutes outside each day, or those aged 3 to 5 should limit their outdoor time to 30 minutes or less, then I'm going to assume that radiation levels are still extremely high in Japan and that the disabled plant is far from secure or nontoxic.  And are we really expected to believe that this radiation has been contained? 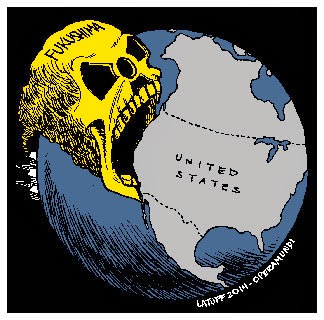 Of course, you will hear all kinds of denials from accredited "government" scientists that say the warnings of Fukashima-related fallout are patently false and the result of fear-mongering.  But how can we discount all of the following reports recently listed on Freedomoutpost.com?  Here are just a few that caught my attention, and I urge you to read the entire article and make up your own mind.
Sailors affected - U.S. Navy sailors on the USS Ronald Reagan responded to the 2011 Fukushima disaster in Japan for four days, and many returned to the U.S. with thyroid cancer, Leukemia, brain tumors and more.  As Ecowatch.com pointed out, at least 71 sailors—many in their 20s—reported radiation sickness and will file a lawsuit against Tokyo Electric Power Co. (TEPCO), which operates the Fukushima Daiichi energy plant.  The ship's water supply was contaminated, which led to crew members drinking, washing their bodies and brushing their teeth with contaminated water. Paul Garner, an attorney representing 51 sailors, said at least half of the 70-plus sailors have some form of cancer.
Starfish are dying - Something is causing starfish all along the west coast of the United States to literally disintegrate into piles of “white goo“… Dr. Peter Raimondi of the University of Santa Cruz says something is making starfish susceptible to what is believed to be a bacteria coined “Wasting Disease.” It essentially disintegrates the marine invertebrates into a white goo after the starfish loses its legs, and Dr. Raimondi believes that radiation from Fukashima could be partially to blame.
Bald eagles are dying -  More than 20 majestic bald eagles have died in Utah in the past few weeks alone — and nobody can figure out why.  Normally the birds are skittish and restive, but farmers across northern and central Utah have found them lying listless on the ground. Many suffered from seizures, head tremors and paralysis in the legs, feet and wings.
Alaska is suffering - The coastlines of Alaska have been awash with dead birds that are “broken open and bleeding”; seals and walruses who are losing their hair and oozing "open sores", as well as polar bears suffering fur loss and open sores;  the population of sockeye salmon along the coastlines of Alaska is at a “historic low”, and Pacific herring are bleeding from their gills, bellies and eyelids.
Warnings from others - Everyone from newspapers like The Vancouver Sun (Canada) to the deputy chairman of Russia’s State Duma Committee for Natural Resources, to a senior researcher of marine chemistry at the Japan Meteorological Agency’s Meteorological Research Institute say that the Pacific Ocean is being ruined by radioactive material that is a direct result of Fukashima.
But perhaps the most heartbreaking analysis comes from a seasoned Australian mariner who, as he journeyed from Japan to San Francisco, stated that he felt as though "the ocean itself was dead."  Here are his exact words:  “We hardly saw any living things. We saw one whale, sort of rolling helplessly on the surface with what looked like a big tumour on its head. It was pretty sickening.  I’ve done a lot of miles on the ocean in my life and I’m used to seeing turtles, dolphins, sharks and big flurries of feeding birds. But this time, for 3000 nautical miles there was nothing alive to be seen... ".
Do you honestly think that all this is made up? If even a modicum of it is true, we have much to be concerned about.  And if you carry this situation out to its logical conclusion, it should make you worry (at least a little bit) about the safety of our own nuclear plants.
The website, Mashable, introduced a nerve-shattering scenario -- at least from my perspective.  After the Fukashima disaster, it seems obvious that we, here in the U.S., have to be concerned about damage to our nuclear power plants due to hurricanes and storm surge flooding.  But they propose another scenario that, according to U.S. geologists, is "inevitable and only a matter of time."  That event is a major earthquake along the New Madrid fault, which lies in the heart of the Midwest United States.
When -- not if -- this major quake hits, here are the projections:   it kills or injures 60,000 people in Tennessee. A quarter of a million people are homeless. The Memphis airport — the country’s biggest air terminal for packages — goes off-line. Major oil and gas pipelines across Tennessee rupture, causing shortages in the Northeast. In Missouri, another 15,000 people are hurt or dead. Cities and towns throughout the central U.S. lose power and water for months. Losses stack up to hundreds of billions of dollars.
BUT here is the one fact that rarely crosses anyone's mind ... there are 15 Nuclear Reactors on that New Madrid fault line -- three reactors in Alabama -- that are of the same or similar design as the site in Japan experiencing problems!  Geologists have been warning us for years now, that the New Madrid earthquake is "imminent".  In the wake of Japan's catastrophe, shouldn't we be preparing for something similar?
So what does that look like?  FEMA's disaster planning coordinators are worried about 750,000 buildings that would be damaged; 3,000 bridges that would potentially collapse; 400,000 breaks and leaks to local pipelines; and 7.2 million people that would be displaced.  Is anyone concerned about the damage from radiation?
It has been three long and harrowing years since Fukashima came onto our radar.  I, for one, feel that the radiation of seas, plant/animal life, environment and humans is worthy of concern, and yes, even a rational amount of fear.  While I understand that these things are totally within God's control, I am also aware that, unfortunately, it is man's lack of using the brain the Good Lord gave him that often spells the difference between success and disaster.  And based on the response to Fukashima, I don't have a whole lot of confidence that we are in safe hands.

Isaiah 24:19-20    "The earth is utterly broken, the earth is split apart, the earth is violently shaken. The earth staggers like a drunken man; it sways like a hut; its transgression lies heavy upon it, and it falls, and will not rise again."