Initially, I didn't want to wade into the shark-infested waters that surround the veto of Arizona Senate Bill 1062.  But I became especially intrigued with a statement by Arizona State Senator Adam Driggs, a supporter of the bill, who said, "It’s really not about the content of the bill right now; it’s about the perception."  I wanted to understand more about this controversy, so I actually read the bill.

It didn't take long; both to read it and to realize that this Bill had been misrepresented.  Those groups and individuals who opposed the legislation claimed that it would have allowed businesses that asserted their religious beliefs the right to deny service to gay and lesbian customers.  Anyone who bothered to read the Bill would find no such language or intention. 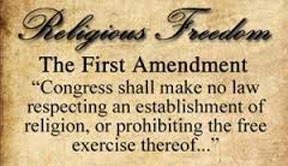 It is my understanding after reading the "legalese", that the Bill's real intention was to protect a person's free exercise of religion whenever a State Action threatened to be a burden against that exercise.  And perhaps for that very reason, it was so important for the opposition to distort the intent of the Bill.  Why, we can't have the State upholding the free exercise of religious beliefs -- that interferes with our social re-engineering of the culture!  Those evil-minded Christians and their allegiance to their faith stand in the way of all we want to accomplish.  If we can make this Bill about discrimination, then we can start chipping away at their influence and weaken their moral argument.
Remember my quote from Edward Bernays yesterday?  He talked about the conscious and intelligent manipulation of our minds, our tastes, our opinions, and our ideas.  The media no longer seems to care about the Truth; it's all about twisting facts, misstating intentions, and prejudicing the public towards a desired outcome.
And we mustn't forget Saul Alinsky's Rules for Radicals and the tactics of those who would like to change America.  The media and the social radicals have learned them well!  Just a few of Alinsky's directives were used exceptionally well in this campaign to defeat SB 1062.  Consider Rule #3:  “Whenever possible, go outside the expertise of the enemy.” Look for ways to increase insecurity, anxiety and uncertainty.  In the case of SB 1062, Christians and lawmakers who supported the Bill in the hopes that it would protect religious freedom found themselves under attack and blind-sided by seemingly irrelevant arguments that they were then forced to address.  Instead of defending the positive aspects of the Bill, they had to defend themselves against a false narrative that totally misrepresented what the Bill was trying to accomplish.
Then there is Alinsky's Rule #6:  “A good tactic is one your people enjoy.” They’ll keep doing it without urging and come back to do more. They’re doing their thing, and will even suggest better ones.  The Media and the LGBT groups love to play the discrimination card, even when it doesn't exist and there is no intention to employ it.  All you have to do is provide a wrong perception, and they will jump on it; condemning without any proof.
Let's look at Rule #9:  “The threat is usually more terrifying than the thing itself.” Imagination and ego can dream up many more consequences than any activist. Perception is reality.  And boy, were there lots of threats.  ArizonaCentral.com reported that Apple, American Airlines, Marriott and American Express strongly opposed the legislation, saying it would be bad for business. The Arizona Super Bowl Host Committee also called for Governor Jan Brewer to veto the bill amid reports the NFL was looking at other sites for its 2015 championship game.  Even John McCain and Mitt Romney urged her to use her veto power.  It's crazy when you realize that every one of these businesses and individuals were worried about how they would be perceived if they supported what was, in reality, a false perception, itself. See how manipulating the truth of a thing can have widespread consequences?
Finally, there's Rule #12: Pick the target, freeze it, personalize it, and polarize it.” Cut off the support network and isolate the target from sympathy. Go after people and not institutions; people hurt faster than institutions.   In this case the targets where Governor Brewer herself, and faithful Christians.  On her part, Brewer didn't want to be seen as the instrument of division in her state.  “Religious liberty is a core American and Arizona value, so is non-discrimination.”  That was her argument for vetoing the Bill.  The problem is that if you read the bill, it is actually about protecting religious believers from discrimination by the State.  Once again, the distortion allowed for a false narrative against those who wish to follow the dictates of their faith.  So now, it is the bigoted, exclusive Christians who are discriminated against, but that's OK.  They deserve it for their narrow, intolerant views.
I still don't get it.  It's not as if a gay couple cannot get a wedding cake baked by someone.  There is no ultimate denial.  Any number of non-Christian bakers will be happy to provide the service.  Yet Christians, who simply want to honor the conviction of their faith, are forced to lose their businesses because they would prefer that another bakery supply the wedding cake.  Not only is this reverse discrimination, but a subtle form of religious persecution.  Apparently, the First Amendment is for everyone but Christians.  And get ready, it's only the beginning!  Today it is your business you can lose.  What will it be tomorrow?

Romans 1:18     For the wrath of God is revealed from heaven against all ungodliness and unrighteousness of men, who suppress the truth in unrighteousness,

Email ThisBlogThis!Share to TwitterShare to FacebookShare to Pinterest
Labels: Faith, Our Culture., Persecution