There is a profusion of books flooding the Survivalist/Prepper genre, and I am occasionally asked to read a book or two and write a review.  This genre covers a wide range of situations including, but not limited to, disruptions in social or political order, natural disasters, nuclear or conventional war, oppressive governments, global pandemics, and general apocalyptic chaos.
Make no mistake; these books are not written with Pulitzer Prizes in mind.  They serve a purpose:  to entertain while informing.  Protagonists in these fictional dramas are generally used to disseminate valuable information to readers (and would-be preppers) regarding emergency medical treatment, self-defense training, food storage, and mindset.  The increased awareness of the possibility of nuclear warfare and/or societal/economic collapse has made this genre explode since 2008.  And now that self-publishing can be done by any Tom, Dick or Harriette, everyone is ready to cash in on this popular and lucrative format.
Which brings me to the two books I am featuring on today's blog post.  I was asked to read both books at about the same time, and while both suffer from my pet peeve of dropped words, misspellings, and the occasional character mix-up in the dialogue, the story line of each book is compelling enough to render an entertaining read.  Without the aid of a Publishing House Editor, I know it is hard to catch all the mistakes -- I know all too well how difficult it is to catch my own errors, so I cannot be too critical.  But, keeping that in mind, here are two of the better selections in the crowded category of Survivalist literature. 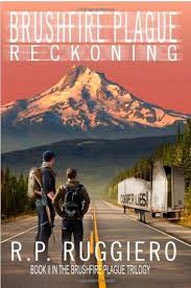 This is the second book by R.P. Ruggiero in The Brushfire Plague trilogy, and I found the storyline to be tighter, more captivating and cleaner than the first book.  The author picks right up where he left off in the first book, and we are taken along on a wild ride as his protagonist, Cooper Adams, deals with the after effects of a deadly pandemic that killed 1 billion people worldwide, including his late wife.  At the end of Book One, Adams ended the life of the progenitor of the plague; a deeply misguided man who deplored the unchecked consequences of global warming which he thought would be the inevitable end of civilization.  So in his madness, he decided to unleash a deadly virus upon the world and limit the destruction to the planet caused by over-population.
At the beginning of Book Two, we find what happens in Cooper's world after he decides to reveal the truth about the origin of the Brushfire Plague.  The rest of the book chronicles how the world views America's role in this deadly calamity; the breakdown of society which results in increased violence and looting; and especially how Cooper mourns the loss of innocence in the life of his young son, Jake.
The book allows the reader to share the uncertainties of being forced to flee from your home for a remote safe house, and all the danger that the hero and his loyal band of friends encounter along the way.  We can see how tyranny and oppression mount, as local bullies jockey for leadership positions; ruling by threats, force or outright violence.
The cast of characters in this second book were more fully developed and interesting.  They played off each other's weaknesses and strengths, and I found myself rooting out loud for them more than once.  I applaud the book for allowing the personalities to ring true and appear human.  They were not super-heroes; and lapses in preparedness and decision-making made me identify with them all the more.
In the end, I liked where this book took me.  It wasn't just a re-hash of the first book, but expanded on the aftermath of the pandemic into the societal collapse.  And I like what it promises in the final book of the trilogy;  the author has taken us from a worldwide plague, to the crises and trauma that accompany the disintegration of community, to a hint that foreign entities are involved, and it's been all about money and the U.S. debt.  I can't wait to see how this trilogy is wrapped up in Book Three, and how Cooper Adams and his faithful friends, by seeking the truth, try to reclaim a civilized world.

Through Many Fires: Strengthen What Remains 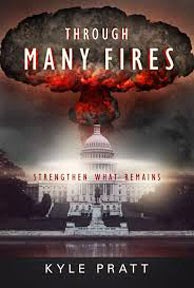 I found the opening scenes and the plot of this book by Author Kyle Pratt quite compelling.  The author wastes no time in grabbing our attention with a nuclear bomb exploding in Washington D.C. during the State of the Union address.  Amidst all the chaos you would imagine, Caden Westmore, a veteran of the Army and a Congressional staffer, views the growing mushroom cloud from his vantage point in Bethesda, Maryland and plans his escape along with an ocean of desperate people.
This book paints a convincing picture of what it would be like as swarms of people try to get back to their homes and loved ones; of the inhumanity of man as the strong prey on the weak; and the grab for power when this nation's seat of government is utterly destroyed.  There will be those who seek to honor and re-establish our Constitutional form of government, and there will be those who take advantage of the upheaval to push their own totalitarian agenda.  We are introduced to these fascinating characters, who promise to play major roles in the sequel.
As the storyline progresses and more cities come under nuclear attack, we read of the natural tendencies for people to band together for protection and survival.  And while this is a common theme among books in this genre, this particular book really relied on its relationships to further the plot.  It was a nice change of pace to focus on people; their family ties, their moral values, and their growing alliances.  These types of books don't always have to be so lesson or information-driven to capture our attention.  Sometimes it's nice to have the apocalyptic event be the backdrop of the story.
That being said, the reader is still introduced to survival concepts such as how will local law enforcement interact with the military and the civilian population?  Will the American military, if ordered, fight against civilian patriots defending their homes and towns?  How do you keep order and a sense of lawfulness when all of conventional society is in turmoil?  Food distribution among refugee camps; when is it permissible to take another's life; and what to do when foreign intervention seems a possiblity --- all these issues are broached with intelligence and practicability.
I liked this book because it didn't follow the formula of the survival genre, and it hit controversial topics head-on.  I hope the sequel continues in this vein.

I must admit that I have quite a collection of unsolicited books in which I could not get past the first chapter or two.  Sometimes it was the excess of typos or poor grammar that offended me; other times the dialogue didn't ring true, or the story didn't flow or stimulate my imagination.  None of these things apply to these two books.  If you are looking for an easy read that doesn't insult your intelligence and keeps your attention, you will find them both a cut above the rest and worthy of your time.

Romans 12:12    "Rejoice in hope, be patient in tribulation, be constant in prayer."

Email ThisBlogThis!Share to TwitterShare to FacebookShare to Pinterest
Labels: Recommendations