I guess it should come as no surprise that under the cover of the Christmas holiday season, the Department of Homeland Security announced their final schedule for the full implementation of the REAL ID Act of 2005.
Enacted by Congress, this law modified U.S. federal law pertaining to state driver's licenses and ID card requirements.  In essence, the law sets forth certain requirements in order to be accepted by the federal government for "official purposes", as defined by the Secretary of Homeland Security. The Secretary has currently defined "official purposes" as presenting state driver's licenses and identification cards for boarding commercially operated airline flights and entering federal buildings and nuclear power plants.  That's the so-called "legal" explanation. 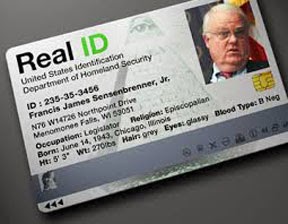 But as reported by World Net Daily, we're being told we’ll soon have a National Identity Card and a Western Hemisphere-compliant travel document whether we want it or not, if we plan to drive in the United States.  Here's how it is going down:  the law was set for a phased implementation beginning in January 2014 and full-scale enforcement planned no later than May 2017, at which time the federal government will no longer accept state-issued driver’s licenses and ID cards that do not meet the minimum security standards set by DHS.
So just what are these "minimum security standards"?  In order for a state-issued driver’s license to be DHS-compliant, an applicant must present a valid birth certificate, verification of the applicant’s Social Security Number or documentation the person is not eligible for Social Security, and proof the applicant is either a U.S. citizen or lawfully admitted to the U.S. as a permanent or temporary resident.  But that's not all!  The driver’s license and IDs issued by the states will have to meet stringent requirements as set by the federal government.
Now if this reminds you of all the horror stories you heard from the last World War, in which innocent citizens were stopped by tyrannical authorities and asked for "your papers, please", then you're not alone.  Of course, proponents of the law will tell you that the ease with which the 9/11 hijackers were able to acquire valid state driver's licenses and/or ID cards is the impetus behind the implementation.
In order to combat any tampering, counterfeiting or duplicating of documents, the state-issued driver's licenses and ID cards must have built-in security features, including but not limited to, full facial digital photographs, plus machine-readable coded information in the form of a bar code that captures the key printed information on the card; such as name of the applicant, address, gender, unique driver’s license or card-identification number, state of issuance, date of application, and date of expiration.
As if all these "improvements" are not enough, these state-issued EDLs (enhanced driver's licenses) must be issued in state facilities in which all employees undergo background checks, including federal and state criminal record searches, as well as with technology that permit the state-issued cards to comply fully with travel rules issued under the Western Hemisphere Travel Initiative.  This means that the EDLs must meet valid passport minimums for travel within the United States, Canada, and Mexico, as well as with Central and South America, the Caribbean, and Bermuda.
This may all sound like a lot of hyper-government gibberish, but it has very real consequences.  With this announcement, DHS is putting state governments on notice that by May 2017, states not complying with REAL ID requirements will find that their state-issued driver’s licenses and ID cards will not be considered valid by the federal government.  That means that individuals with non-compliant identification may be prohibited from passing through TSA security to travel on airlines or trains within the United States or internationally.  DHS said TSA will continue to accept driver’s licenses and state-issued identification cards from all jurisdictions until at least 2016, meaning that enforcement for boarding aircraft will not begin until then.
So, how do you feel about this National ID Card?  For many Americans, it raises a host of questions.  Is it an infringement upon your privacy?  If you, like many Americans, have curtailed their flying habits, why should you be subjected to such stringent requirements in order to obtain a driver's license?  Is there the possibility that tracking devices could be added to the profusion of "security" features being added to the EDLs?  How does this help/hurt illegal immigration?  Is this taking us one step closer to the Mark of the Beast?  Is this really designed to stop identity theft and fraud; and is it really necessary to fight domestic terrorism?  Or is it simply another method by which Big Brother expands his control?  You decide.  But in the meantime, looks like you better locate your birth certificate; your ability to legally drive depends on it.

Matthew 26:42     Again, for the second time, he went away and prayed, "My Father, if this cannot pass unless I drink it, your will be done."