Does Resurgence of "Mein Kampf" Point to Repeat of History? 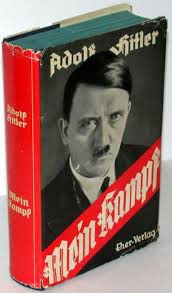 We are all familiar with the quote by Irish statesman and political theorist, Edmund Burke, "Those who don't know history are destined to repeat it."  That is why the recent surge in popularity of Adolph Hitler's Mein Kampf should be a warning siren for us all.
One would hope that anyone, in 2014, who is purchasing the electronic versions of Hitler's autobiographical manifesto would study the entire history surrounding the man.  I found it disturbing when The Blaze reported that two digital editions of the book have risen from 12th and 15th to 3rd and 4th on the best-seller charts of iTunes and Amazon's “Politics and Current Events” rankings.  One electronic edition of Mein Kempf ranks #1 among Amazon's "Propaganda and Political Psychology" best-sellers.  And these numbers don't even include the hundreds of thousands of free versions that have been downloaded from across the internet!
But perhaps the most worrisome aspect of this resurgence came from an ABC News report in which the publisher of a 99 cent electronic version stated that sales have “surged due to an academic interest in the subject.”  To me, "academic" screams teacher, professor, lecturer; and we know the direction that most of our higher centers of learning have been going.
Which brings me back to Edmund Burke's sage advice.  How much of the real history of Adolph History and Mein Kampf ("My Struggle") is disclosed along with his theories of a Jewish conspiracy to gain world leadership?  In the book, Hitler announces his hatred of what he believed to be the world's twin evils: Communism and Judaism.  Yet, I wonder, when the book is discussed among academics and in classrooms, is his hatred of the Marxist-Leninist social order ever mentioned, or just his anti-Semitic views?  Do readers make the correlation between his early grievances while sitting in prison after a failed coup of the Bavarian government, and his subsequent decision to exterminate the Jewish people?  Do they see the danger in his theories that the destruction of the weak and sick is far more humane than their protection?  Are they able to see that Hitler saw a purpose in destroying "the weak" in order to provide the proper space and purity for the strong?  And how do they reconcile this political ideology ...  "There must be no majority decisions, but only responsible persons... Surely every man will have advisers... but the decision will be made by one man."  Can they make the connection to similar political and philosophical theories today?
While there are many nations and governments that ban the publishing of Mein Kampf, including Russia and China, there are far too many where the book is found at almost any community library and can be bought, sold and traded in bookshops.  And it is not just the academics that are pushing the increased sales.
Wikipedia reports that Mein Kampf was widely available and growing in popularity in Turkey, even to the point where it became a bestseller, selling up to 100,000 copies in just two months in 2005. Analysts and commentators believe the popularity of the book to be related to a rise in nationalism, anti-U.S. and antisemitic sentiment "because of what is happening in the Middle East, the Israeli-Palestinian problem and the war in Iraq".  Dogu Ergil, a political scientist at Ankara University, said both left-wingers, the far-right and Islamists, had found common ground—"not on a common agenda for the future, but on their anxieties, fears and hate".  It is never a good thing when your enemies can agree on fear and hate!  Is anyone noticing the link between the rise of Islamic supremacist movements in the wake of the Arab Spring and the popularity of Mein Kampf?
It goes without saying that the rise of anti-Semitism across Europe and the Middle East should be of major concern to everyone who desires peace and stabilization around the globe.  The resurgence of Hitler's political policies, plans and ambitions for a New Order, in which the physical annihilation of the Jews and others considered to be "unworthy of life", should not be allowed to go unanswered.   His glorious ideal of world domination through his idea of a one-world government is not a new idea in the evil minds of men.  But it is one that should be denounced and condemned instead of celebrated --- before it can spread its hate and we all find ourselves enveloped in a struggle of our own.

Micah 2:1    "Woe to those who devise wickedness and work evil on their beds! When the morning dawns, they perform it, because it is in the power of their hand."