What In The World Is Going On?

For those of you who think I am just a little on the fringe, this post will probably confirm it.  But in keeping with my biblical world view, I can't ignore what is right in front of my eyes.  Just yesterday, I was astounded as I read the numerous headlines giving us notice of all the geophysical disturbances occurring around the world.  In a single day, one site listed the following "troubles coming upon the earth": 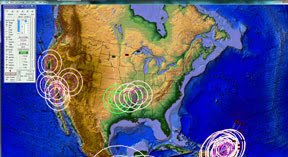 •  Oklahoma was hit with another earthquake; this one a mere 4.5 on the Richter scale.  But consider this:  the Associated Press reported this week that there has been a surge of earthquakes in Oklahoma and northern Texas in recent years.  In fact, AP said more than 2,600 quakes struck Oklahoma this year; most of them registering at magnitude 2.0 or less.  In 2010, there were around 1,000 and in 2011, nearly 1,500 quakes.  Do you find it as interesting as I do, that in just 3 years the number of earthquakes has risen over 150%?
•  Then there is the new study by the Intergovernmental Panel on Climate Change.  Granted, anytime I hear or read "Climate Change", I'm skeptical; but the aberrant weather we've experienced lately tends to make me consider these reports a little more seriously.  Coming on the heels of Typhoon Haiyan in the Philippines, which has killed more than 5,000 people, the words of Sir Brian Heap, president of the European Academies Science Advisory Council, hold considerable weight.  Listen to what he had to say:  Given the tragic events this year in the rest of the world and the recent IPCC report, EASAC feels obliged to draw attention to the growing impact of extreme weather in Europe.  So what is Sir Brian warning Europeans about; and what, specifically, are these "extreme weather events" likely to be?  I can summarize his predictions in a few chilling words .... here is what he is warning his fellow citizens to expect:  KILLER freezes, floods and heat waves that will devastate Britain during the next 30 years. 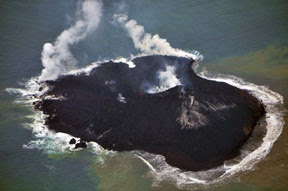 •  Then there was the headline that warned of potential eruption hazards from 14 active volcanoes in Turkey.  Do you find it incredible that all the churches spoken of by Jesus in the Book of Revelation are located in this very part of the world?  And speaking of volcanoes, Indonesia's Mount Marapi erupted yesterday, sending an ash plume nearly one quarter mile into the air.  Combine this with the news that the Klyuchevskoi volcano in far east Russia has been erupting sporadically since August (and sending an ash cloud nearly 4 miles high just two days ago!), and the discovery that a  new island off the coast of Japan has grown 3.7 times since November 20th, when it emerged as a result of undersea volcanic eruptions far south of Tokyo.  Can you really ignore that something spectacular is happening on the earth?
•  Then there are the dramatic weather changes we're experiencing right here in the US.  Just last week, here in Texas, we were basking in mid-80s shirt-sleeve weather.  In a matter of a few days, we are  suffering below-freezing temperatures, and a wintry blast of weather that includes ice and snow.  While this is highly unusual for us, even the northern tier of states who are accustomed to winter, are experiencing temps 20-40 degrees below normal.  Minus 20 and below are common in Montana, Idaho and the Dakotas, and it was an incredible 50 degrees below zero in Minnesota!  This is not normal, folks!  And we haven't even talked about the various comets that scientists are warning us about! 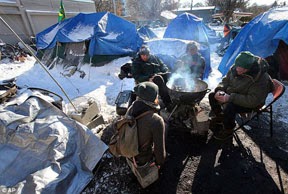 And all this unusual weather is taking a human toll.  The aftermath in the Philippines is catastrophic.    Tornadoes, storms and earthquakes across our Central Plains have taken a terrific toll.  The volcanic ash around the globe will effect crops and the food supply of many.  And it sounds like the freeze is on, in both Europe and the US.
Do you think this is all coincidence, or could it be the prophecies of the Bible coming true?  The Book of Revelation tells us that there will be cosmic disturbances; and that "something like a great mountain burning with fire was thrown into the sea" (Revelation 8:8); and that the heavens will be struck, the sun darkened, and the grass burned up.... I don't claim to know the exact meaning of how these phenomena will be executed upon the earth, or how they will be manifested, or even how these current weather events are connected to the above-mentioned Bible verses.  But I know that all these are (and will) effect mankind and cause great suffering.  I just find it hard to ignore what I see as extreme and out of the ordinary weather events; and I am not content with writing them off as "man-made".
We would do well to pay attention to all these separate events; take notice of their increase and their severity, and then look to the One who created this planet.  It will be a time when we will want to be secure in our relationship with Him.  Until then, I have a feeling that we will be seeing more and more stupendous headlines.

Revelation 7:2-3    "Then I saw another angel ascending from the east, having the seal of the living God. And he cried with a loud voice to the four angels to whom it was granted to harm the earth and the sea, saying, “Do not harm the earth, the sea, or the trees till we have sealed the servants of our God on their foreheads."
Posted by Pam Kohler at 7:00 AM