To My Second Amendment Sisters

I would love to see the Christmas 2013 statistics that connect women and firearms sales.  I would be willing to bet that a fair number of ladies received presents that pertained in some fashion or another to self-defense.  In fact, in just my small sphere of the population, I personally know that self-defense handguns, battle belts, holsters, tactical gear, self-defense classes and clothing in various shades of olive drab green and coyote brown were wrapped and placed under a good number of trees.
In the last year, I have had more conversations on the merits of self-defense training, and seen more women than ever before become interested (for the first time in their lives) in learning how to safely and successfully defend themselves.  And that is exciting! 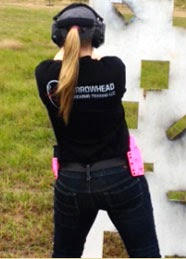 This new evolution of gun-owners covers all age brackets and crosses economic and social lines.  Young, stay-at-home mothers see the benefit of being able to protect themselves and their children, and working women are aware that they are vulnerable going to, at, and on their way home from their jobs. Even senior women want to feel confident venturing outside their homes, and all women are beginning to realize that while we are exposed to ever-increasing levels of danger, we are responsible for our own safety, and quite capable of accomplishing that task.  Just scour the headlines --- there was an impressive number of bad guys who were no match for a woman who knew how to use a handgun.
When I first started taking self-defense training classes three years ago, the number of women who signed up was admittedly remarkable; today it is nearly explosive.  It has been interesting to note as I advanced through different levels, that while the ratio of men to women in the classes is still higher, we women are becoming equal in skills and commitment.  We are becoming competent partners in protecting our homes and our families, and that's not only a good thing, but as it should be.
After all, throughout our nation's history, women were adept with shotguns and rifles at protecting their home and hearth.  They had to be.  As the frontier was settled, their husbands and sons were often gone for long stretches of time; either hunting for food, or fighting off threats from Indians or foreign armies.  As the country became more settled, farmhouses and cabins were still often remote and vulnerable to all kinds of danger; from both animal and man, and women were still called upon to defend their own when necessary.  Although we became more urbanized, those threats never really went away.  American women became more domesticated, eventually entering the workforce and abdicating their defense to either the men in their families or appointed officers of the law. 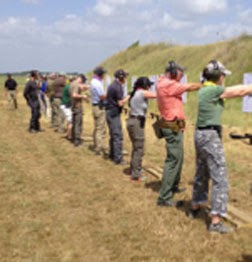 Now we are coming back to the reality that we need to be able to defend ourselves.  The reasons are varied, but I would say we are finally putting a premium on our personal safety and that of our families.  We are well aware that there is an economic downturn, and violent crimes are a reality.  We also take note that prisoners are being furloughed and police officers are being laid off.   And we all know that, despite their good intentions, police can’t always be there when we need them.
And here's the cold, hard truth:  no matter how physically fit and hardened you are; or how many "5 Second Survival" sales pitches you hear, women are no match for a man when it comes to one-on-one. However, a firearm in the hands of a well-trained woman levels that playing field.  We can defend ourselves against any man!
That's why I'm proud to say that according to the National Shooting Sports Foundation, gun-store owners have reported a 73% increase in female customers in recent years, and the number of women buying guns specifically for personal defense has climbed by more than 83%.  Way to go, Ladies!
I am seeing a new wave of women who have never considered gun ownership before, but are now ready to step up and take charge of their own safety; and they want to do it safely and correctly.  It is not enough to have a Concealed Carry Permit. Unless you know how to correctly operate your defense weapon, it will likely do you more harm than good.  So it fills me with great pride to see more women joining the ranks of gun owners and enjoying the discipline and rewards of shooting.  It's no longer just a man's world!

Romans 15:5     "May the God of endurance and encouragement grant you to live in such harmony with one another, in accord with Christ Jesus..."
Posted by Pam Kohler at 7:00 AM