If it wasn't for the Alternative Media, we'd still be in the dark about more government secrets.  Leave it to the Canadian Free Press to shed some much-needed light on the Trans-Pacific Partnership (TPP).  Never heard of it?  Me neither.  You can actually scour the internet for plenty of opinions on this Trade Treaty, but nowhere have I found the Mainstream Media informing the public about it.

As further reported by the New American, it is a secret so-called trade agreement that is on track to be completed by the end of 2013.  Or at least, it is expected that President Obama will call on Congress to approve the TPP in early 2014. 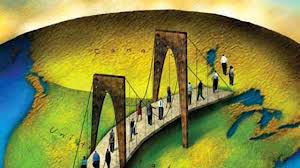 Just like the massive 2,000 page Affordable Care Act (that Congress had to pass in order for us to find out what was in it), this treaty has 29 chapters, but only 5 of them have to do with trade.  Michael Snyder of The Economic Collapse Blog, says, "Most Americans don’t realize this, but this treaty will fundamentally change our laws regarding internet freedom, health care, the trading of derivatives, copyright issues, food safety, environmental standards, civil liberties, and so much more."  He goes on to say that if Wikileaks had not secured access to the TPP draft, there would be next to nothing known about it. It posted a 95 page, 30,000 word document that was "horrifying." Writing about it on his blog, Kurt Nimmo, who edits and writes for InfoWars.com, noted that there are provisions within the treaty for implementing “a transnational ‘enforcement regime designed to supplant national laws and sovereignty with a globalist construct. The TPP is by far the largest and most oppressive economic treaty devised so far."
The Canadian Free Press quotes William F. Jasper, an author and a senior editor of The New American, who calls the TPP “bigger and more dangerous than ObamaCare”; noting that “In November 2009, President Obama announced his intention to have the United States participate in a so-called trade agreement known as the Trans-Pacific Partnership. I say "so-called" trade agreement because 80 percent of the proposed agreement deals with a great many issues beside trade," deeming it “an all-out assault on our national sovereignty.” 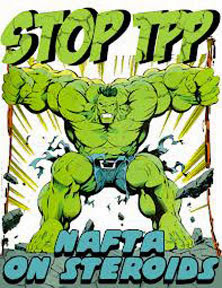 “It would unconstitutionally transfer legislative powers from the U.S. Congress, our state legislatures, and our city and county governments to multi-national corporations and unaccountable international bureaucracies at the World Trade Center.”  And if that doesn't shock you, this revelation from Jasper will surely scare the bejeezus out of you!  "Incredibly, it would also transfer judicial powers from our federal and state courts—which are bad enough—to globalist TPP judges, regional tribunals, and the World Trade Organization.” The treaty would “confer huge advantages on foreign businesses and large multinationals, while at the same time putting companies that operate here in America—especially small and medium enterprises—at a competitive disadvantage. American businesses would remain shackled by the regulations of EPA, FDA, OSHA, etc. while their foreign competitors could operate here unimpeded by those same strictures.”
Even The Huffington Post is warning of the ramifications of this secret legislation, reporting that the result of its passage could be the criminalization of small-scale copyright infringement, and households being disconnected from the internet under laws that punish unauthorized downloading.  Internet providers would be forced to do more monitoring of their subscribers, and it would be easier for governments to remove websites, critics say.  And RawStory.com provided this scary little tidbit:  Ongoing talks between Vice President Joe Biden, who was in Asia earlier this month, Treasury Secretary Jack Lew and Commerce Secretary Penny Pritzker focused on the President's push to convince Congress to offer him Trade Promotion Authority — which would allow him to fast-track trade deals through Congress --- and I'm assuming that authority would include keeping Congress and the American people out of the process.
So where is the MSM on this important piece of legislation?  Why all the secrecy, and why the pressure to fast-track it?  Is this just another vehicle to sublimate the power of the American constituency to a global entity?  Has Congress become that irrelevant?  All these questions deserve answers.  The sad fact is that we are likely to receive none.  The Trans-Pacific Partnership appears to be just one more hindrance to American sovereignty and liberty.

2 Corinthians 4:2    "But we have renounced disgraceful, underhanded ways. We refuse to practice cunning or to tamper with God's Word, but by the open statement of the truth we would commend ourselves to everyone's conscience in the sight of God."