We Ignore At Our Own Peril

My heart was heavy yesterday as I read one of the lead stories on the Front Page Mag website.  It was titled "Largest Massacre of Christians in Syria Ignored."  The article was written by Raymond Ibrahim, who was born and raised in the U.S. by Coptic Egyptian parents who were born and raised in the Middle East.  His family history has provided him with unique advantages, from equal fluency in English and Arabic, to an equal understanding of the Western and Middle Eastern mindsets.
Therefore, when Mr. Ibrahim reports on a situation in the Middle East, he has a unique perspective and is able to give us insight that our Western media is unable (or unwilling) to impart.  He reports that the massacre took place in Sadad, an ancient Syriac Orthodox Christian habitation; so old as to be mentioned in the Old Testament.  In both Numbers 34:8 and Ezekiel 47:15, it is called Zedad in the original Hebrew language (translated to Sedada in Latin).  It is situated at the northeastern boundary of the biblical land of Canaan, the land promised to the Israelites. 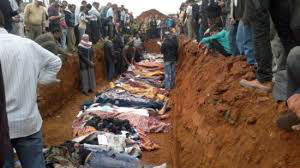 Now it has been largely destroyed by the forces of evil.  Syria's Christians had fled from the onslaught of the U.S.-supported jihadi “rebels” to the remote desert and Sadad, in hopes of finding refuge and sanctuary from the jihad.  But according to sources in Syria, in late October, the U.S-supported “opposition” invaded and occupied Sadad for over a week, till ousted by the nation’s military.  Among other atrocities, 45 Christians—including women and children—were killed, several tortured to death; Sadat’s 14 churches, some ancient, were ransacked and destroyed; the bodies of six people from one family, ranging from ages 16 to 90, were found at the bottom of a well (an increasingly common fate for “subhuman” Christians).
Here are the words of Orthodox Christian Archbishop Selwanos Boutros Alnemeh:  "What happened in Sadad is the most serious and biggest massacre of Christians in Syria in the past two and a half years … 45 innocent civilians were martyred for no reason, and among them several women and children, many thrown into mass graves. Other civilians were threatened and terrorized.  Thirty were wounded and 10 are still missing. For one week, 1,500 families were held as hostages and human shields. Among them children, the elderly, the young, men and women….  All the houses of Sadad were robbed and property looted. The churches are damaged and desecrated, deprived of old books and precious furniture…  What happened in Sadad is the largest massacre of Christians in Syria and the second in the Middle East, after the one in the Church of Our Lady of Salvation in Iraq, in 2010 (al-Qaeda linked jihadis stormed the church during service killing some 60 Christian worshippers)."
But this statement by the Archbishop is apparently only the tip of the iceberg when it comes to the persecution that the nation’s Christian minority has suffered—including beheadings, church bombings, kidnappings, rapes, and dislocation of hundreds of thousands of Christians—since the war broke out.  You see, the "Free Syrian Army" which our diplomats are so fond of touting as democratic-minded freedom fighters, are in reality a conglomeration of Christian-hating jihadi fighters from around the globe.
A month before Sadad, another ancient Christian region, Ma‘loula, one of the world’s very few regions that still spoke Aramaic, the language of Jesus, was besieged by the jihadis, its churches bombarded and plundered, its inhabitants forced to convert to Islam or die.  The last words of one man who refused were: “I am a Christian, and if you want to kill me for this, I do not object to it.” 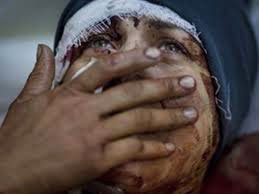 But it was Archbishop Alnemeh's concluding remarks that seared my heart:  “We have shouted aid to the world but no one has listened to us. Where is the Christian conscience? Where is human consciousness? Where are my brothers? I think of all those who are suffering today in mourning and discomfort: We ask everyone to pray for us.” Are we so indifferent here in the Western culture that we can turn a blind eye and a deaf ear to the suffering, the persecution and the fate of our fellow Christians?  It seems quite clear to me that there is a concerted effort by those who hate our faith to systematically eradicate it from the lands of its birth.  Christians in Syria, Egypt, Northern Africa, Iran and Iraq are all being targeted for conversion or death. Watch the associated videos with the article, if you can stomach the repeated shouts of "Allahu Akbar"; (which remember, John McCain says merely means "Thank God").
I fear that our indifference, our ignorance and our arrogance will soon find us facing the same threats  that our Middle Eastern brothers are encountering.  This is not just a regional war, folks.  The force of evil behind jihad knows what hour it is, and that his time is running short.  Those of us of the Christian faith need to be prepared for intense spiritual warfare and, yes, persecution.  The goal of the Enemy is to remove all evidence of a Christian presence.  We will not be spared, nor can we expect any more aid than that which we have offered others.  In other words, if we continue to ignore these atrocities, we do it at our own peril.  The truly sad reality is that many don't see it coming at all.

Matthew 24:12    "And because lawlessness will be increased, the love of many will grow cold."