This little product fits right in with my post from yesterday.  My friends over at prepperwebsite.com featured this unique little gift that will be a mind-blower this Christmas.  It is a scenario-based card game called Conflicted.  Created by SurvivalLogics, Conflicted contains 52 scenario cards and 2 rule cards.  Instead of reading preparedness articles to learn “how to react" in a certain scenario, Conflicted gets you to think through how YOU would respond to a myriad of survival situations after a SHTF event.
But this product is more than a game and an individual mental exercise.  Many who have already purchased the card game are seeing the advantage of “feeling” others out in their families or preparedness group.  When we are all faced with tough situations, we have an idea of how we are going to act. We tend to think this idea is the way most reasonable people would act as well. The problem is that another person in your prepping group may feel the same way .... but about a completely different answer to the same question!
So depending on how seriously you want to play the game with the other players you can really get into some great discussions and get a feel for what kind of person your friend or family member “really” is before you both are faced with a difficult situation and emotions are running high.  Or you can go completely in a different direction and play the game casually with someone who isn’t into prepping at all and then maybe ... just maybe ... at the end of the gaming session that person will be thinking about becoming a prepper themselves.
Here's a sample card that will give you an idea of how the game is played: 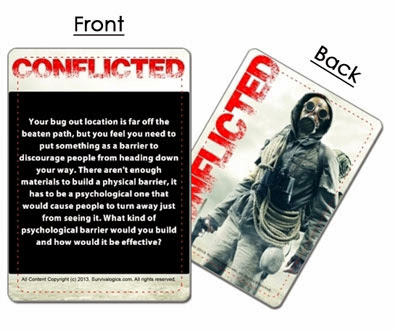 Get the idea?  But what really impresses me with this product is how the developers tested their game before releasing it.  The test group revealed the following reasons they would recommend Conflicted:
1.  It opens up in depth discussions regarding what kind of world we’ll live in after the collapse of society.
2.  It shows to you where others in your group draw the line between their will to live vs their own morals.
3.  It helps you create a mutual understanding among the members of your bugout group when it comes to who’s more suitable for what role after the collapse of society.
4.  It helps you discuss with significant others what kind of survival philosophy your camp will have after the collapse and why that philosophy is important.
5.  The game will raise an awareness regarding other areas of prepping that perhaps you didn’t think about.
6.  Practice your barter, negotiating and leadership skills to perfection on the subjects that matter most.
7.  Conflicted: The Survival Card Game is like a mirror that exposes your real survival philosophy to yourself.
8.  Over 50 scenarios that will reveal how unprepared emotionally humanity really is to the collapse of modern civilization.
9.  See what other preppers all over the world think a post apocalyptic society will be like, as they submit scenarios and the Conflicted website publishes more decks periodically. Have a way to bring this knowledge to your bugout group.  (The website is currently featuring videos of groups that have played the game and their results).
10.  It exposes who the true leader of your bugout group really is. Hope you and your group can handle that….
Sooo, if you're looking for that controversial little stocking stuffer; you know, the one that everybody will be talking about? I think this may be it.  Just go to www.conflictedthegame.com and see where the game takes you!

1 Peter 3:15    "But in your hearts honor Christ the Lord as holy, always being prepared to make a defense to anyone who asks you for a reason for the hope that is in you; yet do it with gentleness and respect."