It's Time To Take Off The Masks

I have continually tried to keep my posts out of the political arena, and for a very good reason.  As I have stated many times before, I approach this reality called life from a Biblical worldview.  I do not think politics can fix what ails us; we are spiritually bankrupt.  However, that being said .... we do have to live in this world, and politics definitely affects our present and future lives.  While we have to rise above the machinations of man and live our lives according to a higher law, we are under the earthly control of institutions allowed by God.
I'm telling you all this because it is time to get honest with ourselves and each other.  Many of us have lived our entire lives thinking that our government consisted of two distinct parties .... Democrat and Republican; Liberal and Conservative.  We've thought that these two ideologies offered us two recognizably different and separate choices when it came to how we wished to be governed. 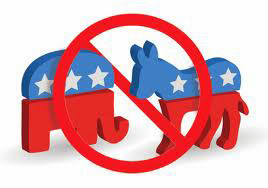 But if you have been paying attention during the last decade or so, it should be apparent that we have been fooled by the powers that be, and for a very long time.  As Americans began waking up and becoming more aware of what was going on behind the curtain, we came to realize that there wasn't quite as much difference between the two parties as they wanted us to think.  Actually, there was only one agenda that both parties subscribed to .... a reform movement that believed better conditions for the country could be found in collectivism and bloated government; individual freedoms and limited government only served to marginalize the electorate.  This movement, called Progressivism, proposed reshaping society, culture and the government to the practice or principle of giving a group of citizens priority over each individual in it.
As this philosophy of "Progressivism" took root in our political mindset, lo and behold, it infected both parties.  So, while you might have thought you have had a clear choice in the last few cycles of elections, in reality, your candidates served the same idol and were simply wearing elephant or donkey masks.
BUT --- and this is a big "but" --- there was a remnant of Americans who weren't being fooled.  They knew our history, and realized that our country was being hijacked by an extremely "un-American" belief system.  And the beauty of this awakening was that it spoke to Americans of all races,  ages, economic status and party affiliations.  They liked the principles of our Founding Fathers, and had no desire to dismantle the Constitution; nor were they willing to abandon the freedom and liberty that our forefathers fought so hard to preserve.
And while this group of Americans could fall under any number of banners... Libertarians, Tea-Partiers, or Independents, they weren't interested in creating havoc and disassembling the two-party system.  They earnestly wanted to work within the Conservative wing of the Republican Party.  They, perhaps naively, thought we could all get along and that the Grand Old Party was sincerely interested in  listening to those who were registered Republicans.  At least that's what they pretended to do when they appeared on the nightly news.  But therein lies a huge part of the problem.
You see, if you are of a conservative bent, and you think you are getting the truth from "our side" on Fox News, I am here to tell you that you must be very discerning in what you believe.  I urge you to consider news sources outside the Mainstream Media (and I put Fox in that category).  By now you should be aware of the fight within the GOP between the Old Guard and the Young Turks.  In fact, it has become quite vicious as new, young Constitutional-based representatives of the people are actually trying to accomplish in DC what they were elected to do --- govern according to the wishes of the people.  But the PID (Progressives in Disguise) Republicans don't want to change the status quo.  All the rancor and bickering back and forth is just part of the political shenanigans to make us think they are working for us.  Nothing is getting done because neither party wants anything to change!
So if my opinion is something you have perceived on your own, then congratulations!  You are aware of those elected officials and organizations that are truly working for us, the people; and you recognize who the wolves in sheep's clothing are.  If this is truly something you've never considered, then I highly urge you to read this article, from a very informative alternative news source.  You will be shocked at the subterfuge and collusion going on in the name of conservatism.
After you recover from the shock of this article, I want you to pray for this country.  There are some very sincere "lovers of freedom" who are trying to get our country back to its Constitutional roots, and they are being hounded and pursued by some very dishonorable and corrupt individuals.  I truly believe that we are on the cusp of great changes in this country.  We are truly seeing the battle between Good and Evil.  Either the embers of individual responsibility and liberty will be fanned, and ignite into a vigorous group of elected patriots who want to lead us back to our foundational freedoms; or these smoldering embers will be snuffed out and the tide of progressivism will extinguish our right of self-determination forever.
Inform yourselves!  Don't accept our elected representatives based on face value or the letter behind their name.  Know what they stand for and who is in the background supporting them.  Make them take off their masks! The elections in 2014 are either going to be the saving grace of our country, or be our last dying breath of freedom.  Don't listen to the rhetoric and the words from those who claim to have your best interest at heart; watch what they do.  And may our God, who blessed this great country into existence, forgive us of our sins, and return us to His will and purpose.

1 Peter 2:16    "Live as people who are free, not using your freedom as a cover-up for evil, but living as servants of God."