What A Difference A Week Makes

It's been a little over a week since I wrote my post on the State of Egypt from a Christian's Perspective.  And look what the headlines are revealing today!  It's hard to know how much to believe, but when there is a running theme of violence and death throughout the various news reports, one must give the accounts credibility.
Last week, I gave you a report from Ramez Attalah, the General Director of Egypt's Bible Society.  He reported that most of the violence was coming from the pro-Morsi elements, as the Muslim Brotherhood followers fought to keep their foothold in the new democracy.  He went on to say that " "Most Egyptians, despite their disdain for the MB, oppose Egypt turning into a police—or worse, army—state and have been putting much pressure on security forces to be restrained in their response to the MB agitators. Most of us yearn for a civil state run democratically." 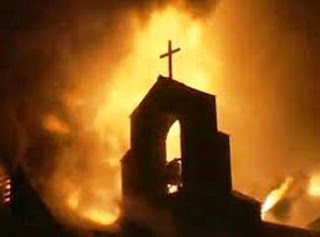 So how does he feel now that the Muslim Brotherhood has burned churches and some of the Bible Society's stores?  How does he feel when he sees violence against the Egyptian Christians escalating?  "We Christians realize that we will have to pay a price for the freedom we have recently acquired.  If this is the price, we are willing to pay it."  But he goes on to confidently declare that Bible Society stores will be reconstructed and they will not be deterred from selling their Bibles.  He also stated that the Egyptian Army has pledged to protect churches and help provide government compensation for destroyed church property.
And it certainly seems that the Egyptian Army is willing to stand firm in facing down the violent protests.  Last week we saw more than 750 people killed in four days of violence after the military and police launched a blistering crackdown on Islamist protest camps, which sparked international condemnation.
The military seems to have its work cut out for it as it struggles to restore peace to the ravaged country.  Trying to find that balance between Brotherhood supporters who boldly target Egyptian Christians, and self-styled "vigilantes" who oppose the hard-line Islamists, has led to an unprecedented level of civil unrest, nightly curfews, and a crackdown on protestors.  It has left the country severely divided, but the arrest of top Brotherhood and Islamist leaders shows that the Egyptian military is steadfast in its goal to restore order.
But the citizens of Egypt are not the only ones divided over this situation.  The European Union is split on its reaction.  EU leaders have promised to review ties with Egypt's army and interim government unless the bloodshed ends.   These diplomats have called for emergency talks to discuss the situation in Egypt and future "EU action".  Other nations have condemned violence on both sides, while especially describing attacks on churches as "unacceptable".  But not all countries are as critical of the military crackdown.  Both Saudi Arabia and Jordan have said they back Egypt in its fight against "terrorism", which seems to coincide with a good portion of the Egyptian populace, who label the MB as "terrorists."
According to a report by the BBC over the weekend, the head of Egypt's armed forces has said that his message to the supporters of ousted President Mohammed Morsi is that "there is room for everyone".  General Abdul Fattah al-Sisi urged them to help "rebuild the democratic path" and "integrate in the political process".  But he also warned the military would not be silent in the face of violence.
After millions of people took to the street nearly two weeks ago to give Sisi an apparent mandate to fight violence and terrorism, the response by the Brotherhood was calls for more protests and a "day of rage", resulting in the burning of churches.  The General took to the Egyptian military's Facebook page with this comment:  "We will not stand by silently watching the destruction of the country and the people or the torching of the nation and the terrorizing of the citizens ... There is room for everyone in Egypt, and we are cautious about every drop of Egyptian blood." It remains to be seen if the hardline Islamists and their Muslim Brotherhood network are willing to integrate and co-exist with their fellow Egyptians; Christian or otherwise.  I fear that the chaos and violence are far from over.

Leviticus 19:18    "You shall not take vengeance or bear a grudge against the sons of your own people, but you shall love your neighbor as yourself: I am the Lord."