I debated whether to engage in the "rodeo clown" debate that is the latest controversy capturing the attention of Middle America.  In case you are unaware of the story, a rodeo clown appearing at the Missouri State Fair wore, as a part of his costume, a mask of our President.  And in the running gag between him and the announcer, the audience was asked if they wanted to see the clown "run down by a bull".  By the response of the crowd, the question was not offensive. 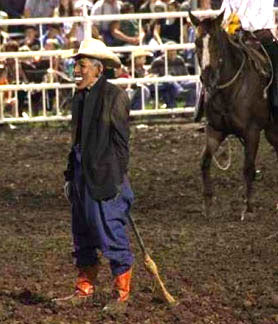 Not so when it comes to the Mainstream Media or the hallowed halls of Congress.  Everyone and their grandmother is offended, so it seems.  From calls for a life-time ban of the rodeo clown from performing at state fairs, to demands for "heads to roll" and financial consequences to be levied against everyone involved (clown, venue, and the Missouri Rodeo Clown Association), this incident has evolved into the "realm of the ridiculous."  Oh, and let's not forget the eagerly-sought-after claim of racism.
While there are those who want to label the stunt as "unconscionable, inappropriate, offensive and disrespectful" of the office of the Presidency, I have one question for them.  Where were you during the insanely ugly character attacks that were taking place on the last President?  Remember the college professor who encouraged his students to write an essay that involved the murder of the President?  Why weren't you calling for his life-time ban from teaching?  Or financial consequences for the University that employed him?
Why is there freedom of speech for those who hate conservative ideology, the Constitution, or God; but the First Amendment doesn't apply to those of us who disagree with you?  And now Missouri's state branch of the NAACP has rushed to call the incident a "hate crime".  From my understanding, a hate crime generally refers to criminal acts that are seen to have been motivated by bias against a racial group, religion, sexual orientation, ethnicity or gender identity.  I don't see how any of those can be proven based on the statement or actions in the arena that night.
And racism isn't the only charge, Mary Ratliff, the NAACP President is levying.  “We are taxpayers in the state of Missouri,” she said in an interview last week, “and when taxpayer money is utilized to discredit and be disrespectful to our president, whether he be black, white, Hispanic, Latina…it is an outrage.”  Again, I go back to the University professor and his outrage against President Bush.  That college receives funding from the American taxpayer.  Where was the NAACP then?
Even the Senator from Missouri is climbing on the "we have to protect the American taxpayer" bandwagon, insinuating that the Missouri State Fair receives federal funding, which must now be considered.  There are even those calling for the Department of Justice and the Secret Service to investigate!  Do I have to say it again ... remember the University professor?!?
Whether the White House is quiet on this incident because it is nonsense and unworthy of such hubbub, or they are leaving it to others to stir the flames of racism, hate and controversy, I find it undeserving of such debate.  There are far more reprehensible actions we should be shining the national spotlight on ... is this really what we should be focusing on?  Does it really rival Benghazi, Egypt, the IRS or NSA?  REALLY?  And at the root of all this dissension is the unanswered question .... was it the wearing of the mask that you found offensive and beneath the dignity of the Presidency, or was it that you just didn't like what it stood for to that audience?  Perhaps that is what we should really be debating.

Ephesians 4:31-32    "Let all bitterness and wrath and anger and clamor and slander be put away from you, along with all malice. Be kind to one another, tenderhearted, forgiving one another, as God in Christ forgave you."
Posted by Pam Kohler at 7:00 AM