If You Want To Fail In America ... Do These 5 Things

Ever read a column or article that just makes so much sense, you can't understand why the rest of the world hasn't figured this out?  Well, that's what I thought after reading John Hawkins' commentary on Townhall.com.  Mr. Hawkins sets forth the idea that Success in America isn't all that hard to achieve.  All you need to do is take a look at the clues that "the Successful" exhibit, and use some common sense.  Of course if you do that, who needs all the pointy-headed elitists who feel it is their place in society to tell us why we CAN'T achieve success without them.
At the basis of his argument is the foundational aspect of Success through hard work.  You can get a lot of things in this life and culture today through handouts .... but Success isn't one of them.  So if you aren't willing to apply a little sweat and tears to get ahead, then you should probably expect to fail.  And if that is your goal, here are 5 sure-fire ways to make sure you never succeed:
1)  Expect a politician to fix your problems:  First of all, politicians can't identify with your problems.  Their problems are not like your problems.  You are trying to figure out how to put food on the table, pay for college tuition, make the mortgage payment.  A politician is focused on maintaining his power base in that Babylon-on-the-Potomac, Washington D.C.  And in case you haven't noticed, "fixing things" happens at a snail's pace in D.C. -- if it happens at all!  So if you're waiting around for some elected official to fix your "problem" so you can enjoy success, you might think about another route to prosperity.  If you want to fail, hitch your plans for success to a politician's "promises". 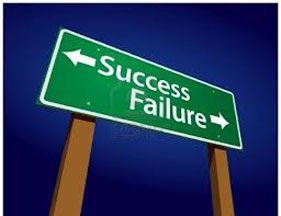 2)  Demand that the world change to suit you:  In case you haven't realized this yet, the world is not all about you!  The rest of society isn't putting all their efforts into helping you climb the ladder of success.  If you want to see your circumstances change, you can't sit around waiting for the world to meet your needs!  Mr. Hawkins gives the perfect example:  Republicans won the Civil War in 1865. Republican Dwight Eisenhower forcibly integrated the schools in 1957. Percentage wise, more Republicans than Democrats voted for the Civil Rights Act of 1964 and today, almost 150 years after the end of the Civil War, you still have liberals like Jesse Jackson and Al Sharpton crying "Selma, Alabama" and "Emmett Till" every time Dominos shows up five minutes late with a pizza.  Change does happen, but if you need it to happen in order to be successful, then your road to success might never occur.  If you want to fail, all you have to do is keep waiting for change.
3)  Rely on the government to take care of you:  Don't get me wrong, there is a place for food stamps and free lunches when you're down on your luck.  It becomes a problem when you would rather continue to stay down there, than create your own luck on the way to a successful life.  And success doesn't have to be big fancy cars, yachts and a mansion.  Success has more to do with personal pride in earning what you have, no matter how simple or opulent.  The sky should be the limit!  If you are willing to work hard, you deserve all you can achieve.  But if you want to fail, just become addicted to the free ride; you'll never get enough of it.  And just like the junkie, you'll see your Desire for Success be replaced with a spirit-killing dependence.
4)  Focus on pulling everyone else down rather than raising yourself up:  You know the old saying ... "Misery loves company", and nothing is truer than a collective attitude of misery.  When you start identifying with those who are satisfied to settle for less; rather than adopting the mindset of one who has climbed above the rest, then you are setting yourself up for failure.  If you resent someone's successful lifestyle, and covet their success, doesn't it make more sense to emulate their path than to shackle yourself to the destructive patterns of those who are failures?  As Mr. Hawkins so eloquently states:  Winners adapt while losers complain and people who spend their lives obsessing over what's fair and unfair usually turn out to be miserable, while people who have good lives don't give up until they find a way to achieve.
5)  Think of yourself as a victim:  When has feeling sorry for yourself ever achieved your goal?  If you look hard enough, you can always find someone to blame for your failure:  "The Man"; the rich guy; the guy of another race, gender, or sexual preference.  But the truth is that YOU are to blame!  Quit waiting around for someone to rescue you, and save yourself!  Because if you looked hard enough, you'd find someone EXACTLY like you who has made it; who has achieved the success that you think you deserve.  If you want to fail, just keep on pointing the finger at someone else instead of looking in the mirror and seeing someone who is holding themselves down.  Get over yourself and start thinking of yourself as a Winner.
These are all tried-and-true lessons; nothing new here.  But I do feel that Success in America is becoming more trivialized in our national dialogue, and "fairness" and "equality" touted as the new mantra.  However, I will always champion individual success as the spirit of our country's psyche, and the heartfelt ambition of every American.  If only these 5 principles were denounced in every classroom across the land, we might be able to encourage a new generation of "do-ers", instead of perpetuating mediocrity.

Proverbs 13:4     "The soul of the sluggard craves and gets nothing, while the soul of the diligent is richly supplied."
Posted by Pam Kohler at 7:00 AM