Our country has been embroiled for nearly one-and-a-half years in the prosecution of George Zimmerman for the death of Trayvon Martin .... both in a court of law and in the court of public opinion.  This weekend, the verdict was reached, and George Zimmerman was found not guilty of second-degree murder and the jury declined to convict him on a lesser charge of manslaughter.  Whether or not you agree with the verdict, we are faced with some very tough questions about the state of our society.
And so that we clearly understand the charge to the jury, for a finding of second-degree murder, the jurors would have had to believe that Martin's unlawful killing was "done from ill will, hatred, spite or an evil intent" and would be "of such a nature that the act itself indicates an indifference to human life."
To convict Zimmerman of manslaughter, the jurors would have had to believe he "intentionally committed an act or acts that caused the death of Trayvon Martin." That charge could have carried a sentence of up to 30 years in prison, though the jury was not told of that possible sentence. 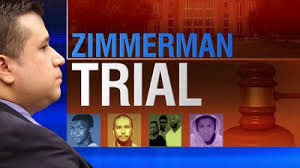 So according to the rule of law, (and I would like to think that we still abide by that in this country), we in the United States are guaranteed, under Article Three of the Constitution, as well as the Sixth and Fourteenth Amendments, to a jury by trial of our peers.  Furthermore, we agree to abide by the ruling of that jury.   Both the prosecution and defense counsels presented their cases and evidence.  A qualified and approved jury listened to all the testimony and came to their decision.  But it seems that there are many who are unwilling to accept the verdict.
Now, the "rule of law" generally refers to the "authority and influence of law in society," especially as a constraint upon behavior.  And that, I fear, is where our society is breaking down.  Let me explain.
The effects of the NOT GUILTY verdict in the Zimmerman trial will be felt for a considerable time to come.  But we are already seeing that the influence of our Constitutional laws upon society are waning.  Many among the media, as well as celebrities and politicians seem to feel that our rules of law account for nothing.  They dismiss the jury's decision, in favor of what they deem as "justice".
I find it disgraceful that a paid athlete of the highest order thinks it is OK to broadcast a threatening tweet against the life of the defendant.  (Where are the critics who were so willing to castigate Paula Deen for her 30-year-old remark?)  And what about the celebrities who act as judge and jury in front of thousands of fans when they proclaim that this verdict was a miscarriage of justice.  Unless you were sitting in that jury box, I don't believe you are qualified to make a judgment on whether justice was done or not.  Then there are no repercussions when the Black Panther Party offers a  $10,000 reward for whomever can capture George Zimmerman?!  Add to that the Federal Government, who is considering overlooking the not guilty verdict in order to exact some form of punishment on a man that was legally judged innocent.   Are we a nation of laws, or aren't we?
I worry that this case will set a dangerous precedent; that every time a legal decision doesn't go our way, we can simply ignore the judgment and exact our own sense of justice.  So what is the point of law?  Won't we simply descend into mob rule and civil disorder?
Just yesterday, we had a sitting Senator, Harry Reid, ask for the Justice Department to prosecute George Zimmerman. “I think the Justice Department is going to take a look at this,” Reid told NBC’s Meet the Press. “This isn’t over with and I think that’s good. That’s our system, it’s gotten better, not worse.”  Umm, excuse me, Mr. Senator, but I thought he had been prosecuted, and found INNOCENT!  And if it is our system, why aren't you willing to abide by it?  It seems that you want what you want, not what our system has decided is just.
And of course, the politicians are never going to let this "crisis go to waste."  So how convenient is it to bring in gun control in the aftermath of this verdict?  I can hear them in late night caucuses, "We can still salvage a victory out of this mess yet!  Passions are high and we can combine racism and gun control into one issue and it will make a perfect vehicle for our agenda."
I am praying that the foundation of our Constitution can hold up under this onslaught.  I feel that it is only hanging by a thread and the scales of justice are about to be overwhelmed.  Consider the hallowed words of the Preamble of our Constitution:

We the people of the United States, in order to form a more perfect union, establish justice, insure domestic tranquility, provide for the common defense, promote the general welfare, and secure the blessings of liberty to ourselves and our posterity, do ordain and establish this Constitution for the United States of America.

Now ask yourself this question .... in the wake of this prominent trial in Florida, are we still concerned with "establishing justice and insuring domestic tranquility"?  Or are we more inclined to throw justice to the wind in favor of personal biases, influence, and partisanships?  Is the purpose of justice to serve the common good and truth, or is it to further personal agendas?  It is a sad and tragic fact that Trayvon Martin was killed.  I cannot imagine that anyone celebrates what happened on that night.  But humanity has attempted justice in the best way we know how, and whether we like the outcome or not, our laws have been followed.  The threat of chaos and lawlessness will only serve to rip apart the fabric of our fragile society.
Dear God in Heaven, I have always believed that this nation was set apart by your Divine plan, but I am beginning to see only the Devil's hand in the midst of this tragedy.  Do not forsake us; return us to your precepts and your model of behavior and thought.  Heal our land!

Zechariah 7:9       This is what the LORD Almighty says: "Administer true justice; show mercy and compassion to one another."