Be Aware Of Your Past

Have you ever done something stupid in your past?  Especially those teen and college years?  Think that it can't come back to haunt you 40 years later and cause you to lose your Second Amendment rights?  Well, that's Ron Kelly's story.
Kelly is a retired Army veteran, having given 20 years of service to his country.  Yet, when he tried to buy a .22-cal rifle at a Wal-Mart in Tomball, Texas, the computerized background check flagged him for a 42-year-old misdemeanor charge involving marijuana.  The violation occurred while he was in high school, and resulted in a night spent in jail, and one year's probation.  Little did he know, that over 40 years later, the incident would strip him of his Second Amendment rights. 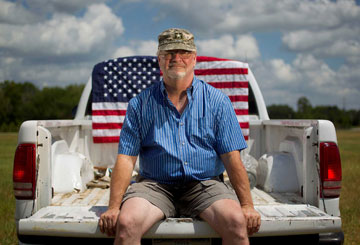 The irony of the situation, is that Kelly had a long career of firing tanks, machine guns and an array of other weapons in the Army.  Now he is being denied the right that he served to defend.
According to the FBI, which runs the background checks known as the National Instant Criminal Background Check System, the law states that a person can be prevented from owning a gun if they are convicted of a misdemeanor in which they could spend more than two years behind bars.  The fact that Kelly was sentenced probation back in 1971, doesn't matter.... He could have received a sentence of two years or more.
I want to make it perfectly clear that I do not endorse drug use, or excuse him for breaking the law.  This is not about letting anyone have a gun who wants one.  I just find it ironic that the government had no problem with training him to use firearms during his military service; nor did they apparently think his "criminal" background was cause to exempt him from exposure to firearms.  Granted, they may not have been aware of his misdemeanor charge, but shouldn't 20 years of exemplary service in the military count for something? And isn't it possible that if he goes to court and gets this old record expunged, that his rights could be restored?
Kelly wanted the gun to keep around the house for self-protection, and considering that he fired perhaps 100,000 rounds of government ammo over his 20 years of service, it's a pretty safe bet that he knows how to handle the weapon.
As for checking his record back in North Carolina, where he was born and raised, arrested and later joined the service – his conviction is so old that officials there can’t readily find the record.  And as the reporter for the Houston Chronicle, who covered his story asks, "If they can’t find the conviction, how did the FBI?"
Does anyone else besides me find this incident preposterous?  And for me, it raises many more questions ... Is he being singled out because he is a military veteran?  Is he being profiled?  A misdemeanor charge does not necessarily exclude you from jury service, yet your Second Amendment right can be violated?  Surely, he can't be the only citizen with decades old misdemeanor charges applying for gun ownership.  Was his application just the luck of the draw?
I find it hard to believe that this decision will stand.  Perhaps Mr. Kelly's Congressman can go to bat for him, or the Federal Government will take a new look at this application, consider it on an individual basis, and find a more reasonable solution.  This man has served his country well and apparently been a model citizen.  He went about the purchase of a firearm in a legal manner and is now being punished for what serves as a minor infraction in today's world.  Apparently, "tolerance" is today's mantra, and applies to everything but the Second Amendment.