Love In Its Purest Form

Every once in awhile, there is a story that transcends all the ugliness in the world and simply must be told; a story that expresses the purest form of the condition we call "love".  I have not only the story, but a picture that communicates this condition far better than my feeble words.  Here it is: 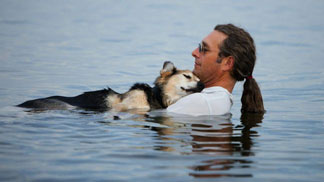 This is a photo of John Unger and his dog, Schoep, who in this photo was 19-years-old and suffering from severe arthritic pain.  Schoep (named after a popular Wisconsin brand of ice cream) and John have been together since John rescued the dog as an 8-week-old puppy.  Schoep cowered in the corner of the cage at the animal shelter, and appeared to have suffered some kind of abuse.  John showered him with love and brought the animal out of his despair and despondency; and Schoep would many times, through the years, return the favor.  It was a bond like no other, and so many of us can identify with that spiritual love between man and animal.
As the years progressed, Schoep developed a painful degenerative arthritis, but John couldn't afford a regimen of daily medication and treatments that cost as much as $200 a session. Instead, he would carry the dog into nearby Lake Superior each evening to ease Schoep's aching joints and help him fall asleep. The buoyancy of the water soothed his arthritic bones.
And because John knew that the end was coming quickly for Schoep, he asked a photographer friend of his to snap this one last picture of them together.  The friend posted the photo on her Facebook page and the image went viral, receiving more than 2 million hits in a week!  That's when the donations began pouring in.
People from around the world wanted to honor the love between John and Schoep, and more than $25,000 was raised.  John then established the Schoep's Legacy Foundation to help low-income families pay for their pet's medical care. "Literally overnight, I went to bed and the next day when the photo went viral, it was a whole new ballgame for me and for Schoep,'' said Unger. "It's still overwhelming for me in a sense. I knew the amount that was coming in would be way over the limit that Schoep was going to need for the rest of his life. I just thought, 'I have to give back.' "
Schoep was able to receive laser treatments and pain medication that reduced the swelling in his joints and allowed him to take walks, go swimming, and rest more comfortably.  This last year was a Godsend for John and Schoep.  On June 15th, Schoep turned 20 years old, a miraculous feat for the shepherd mix.  Then it came ... John's Facebook post was short and heartfelt ... "I breathe but I can't catch my breath...Schoep passed yesterday."
I know that there may be those of you who wonder why I would even comment on this story.  But having known the unconditional love of a companion like Schoep, I felt the desire to honor this special relationship that I think comes straight from God.  The love and trust and joy that an animal bestows on us is the picture of the relationship God desires with us, and that we would have with each other.  No condemnation, wholehearted, unlimited, and unquestioning ... this is the compete picture of love.  For just a moment, we can escape all the division and hatred in the world, and lose ourselves in the sweet, peaceful and tender image of Schoep in John's arms.   I imagine that this is how God loves us.  Rest in peace, Schoep.  You have touched my heart and soul.