When was the last time you heard a sitting politician say that he believes a Spiritual Revival is needed in America?  And actually mean it?  Well, that is exactly what Senator Ted Cruz, from Texas, declared in a recent interview.  He went on to say, "I think we’re at the edge of a precipice. If we keep going down this path we’re risking losing our nation. We’re risking losing this incredible oasis of liberty."
Sure, we've heard lots of politicians attempt to court us Bible-believing Christians in their egomaniacal quest for power and influence.  What makes Mr. Cruz more credible?  Why should we believe him?
Well, one reason is his father, Rafael Cruz.  The elder Cruz is beginning to make a name for himself due to his outspoken praise of America.  In case you're unfamiliar with his life story, it is actually quite impressive.  As a young man, he opposed the U.S. military-backed dictatorship of President Batista in Cuba.  He got caught up in the fever of "hope and change"; a revolutionary ideology perpetuated by a young, charismatic leader named Fidel Castro.  He said the propaganda began in the educational systems, and as many young people did, they followed the promised "liberator" blindly.  As a result of being involved in the revolution, he was captured twice.  But he was lucky enough to get a student visa out of the country and he landed at the University of Texas.  "I didn’t have any money. Couldn’t speak a word of English. Got a job as a dishwasher making fifty cents an hour.  Went to school full time, worked full time…I paid my way through school.” 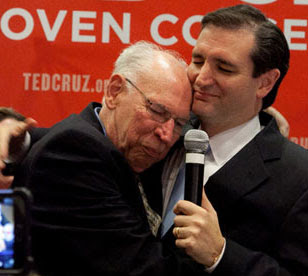 After Castro took power, Mr. Cruz returned to Cuba for a short time and was shocked at what he found.  “This same man that I had heard talking about hope and change now was talking about how the rich were evil, how they oppressed the poor, and about the need to redistribute the wealth. They started attacking the freedom of the press. They started confiscating property, and freedom was a thing of the past. So I came back to the United States disillusioned.  I started speaking against the Castro regime…when I was going to grad school my student visa was extended, and then for a short time I was a political refugee until I got resident status…and later on I became a citizen.”  Within five or six years of finishing college, Rafael Cruz had his own business in oil and gas exploration.  He is not hesitant in proclaiming his pride of becoming an American.  He has obviously passed on that pride to his son, but he gave him something more --- something that is at the foundation of Senator Cruz's belief in spiritual revival.
When Ted Cruz was a child, around the age of four, his father relates that he read him nightly Bible stories.  "I would declare and proclaim the word of God over him. And I would just say, 'You know Ted, you have been gifted above any man that I know and God has destined you for greatness'.  And I started making declarations about the Word of God over him every day."
What kind of impact do you think that has on a child?  What kind of person would you become if you were told every day that the Promises of God are yours for the asking, if you will only believe in His power and authority?  Do you think you might see the world, and your place in it, from a different perspective -- perhaps less selfishly, and more from a position of pleasing and obeying God?
I have no doubt that many of our politicians were told as children that they were destined for greatness; they even developed a self-imposed "God complex".  But there's a difference between making a child (or a man) responsible for his own greatness (absent God), and making God's purposes foremost in our lives; putting a faith in Him at the center of our achievements.
Not only did the elder Cruz establish a link between spiritual matters and public service in his son, but he transferred his understanding of freedom.  He knows what it was like to lose that freedom in his native Cuba, and then was able to teach his son how precious freedom is to hold on to.  By high school, Ted Cruz is reading The Federalist Papers, The Anti-Federalist Papers, and is one of five kids in his class to memorize the entire U.S. Constitution.   That translated into a life-long passion for the Constitution, freedom, free markets and limited government.
As a freshman Senator, Ted Cruz is making a name for himself with his bold defense of these same principles.  And now he is proclaiming the need for a Spiritual Revival.  Is he for real?  Or just another politician playing to the masses?  Time will tell.  But if his father is any indication of his true character, we just might have hope in the halls of Congress.  It is often heard these days, that we can't solve the spiritual problem in our country with a political solution.  Well, here is one politician that advocates for a spiritual solution.   If he is really sincere, may God guide his steps and protect him from the evils of Washington D.C.