Beware of "Best-Sellers" on Jesus

I very rarely repeat another author's article verbatim, but I have heard a growing concern over this popular new book, and feel that Pastor John S. Dickerson's explanations for his unease mirror my own perfectly.  Rather than imitating his superior exposé, I feel you should read his commentary in his own words:

Reza Aslan, author of the new book, “Zealot: The Life and Times of Jesus of Nazareth” has been interviewed on a host of media outlets in the last week. Riding a publicity wave, the book has surged to #2 on Amazon's list.  Media reports have introduced Aslan as a “religion scholar”, but have failed to mention that he is a devout Muslim.
His book is not a historian’s report on Jesus. It is an educated Muslim’s opinion about Jesus -- yet the book is being peddled as objective history on national TV and radio.
Aslan is not a trained historian. Like tens of thousands of us he has been formally educated in theology and New Testament Greek.  He is a bright man with every right to hold his own opinion about Jesus—and to proselytize his opinion.
As a sincere man, Aslan’s Muslim beliefs affect his entire life, including his conclusions about Jesus. But this is not being disclosed.  Zealot is being presented as objective and scholarly history, not as it actually is—an educated Muslim’s opinions about Jesus and the ancient Near East.
Its conclusions are long-held Islamic claims—namely, that Jesus was a zealous prophet type who didn’t claim to be God, that Christians have misunderstood him, and that the Christian Gospels are not the actual words or life of Jesus but “myth.” 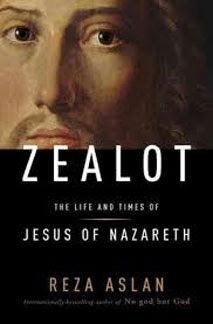 “Zealot” is a fast-paced demolition of the core beliefs that Christianity has taught about Jesus for 2,000 years.

These claims are not new or unique. They are hundreds of years old among Muslims. Sadly, readers who have listened to interviews on NPR, "The Daily Show," Huffington Post or MSNBC may pick up the book expecting an unbiased and historic report on Jesus and first century Jewish culture. (I will let my Jewish friends address Aslan’s statement on MSNBC that, “there were certainly a lot of Jewish terrorists in first century Palestine.”)
As a journalist and author who is Christian, I cannot imagine penning a so-called objective biography of Muhammad and then concealing my conflict of interest in national media interviews.
In world history there are no religions more violently and anciently opposed than the crusading, fighting, at times blood-shedding rivals of historic Islam and historic Christianity. Even non-violent Muslims and Christians, like Aslan and myself, understand that we hold aggressively oppositional views—particularly about Jesus. National news coverage of Zealot has ignored this conflict of interest.
Zealot is written with the self-assumed authority of groundbreaking revelation from a historian. In reality, it is a religious person’s opinion about Jesus—from an adherent to the religion that has been in violent opposition to Christ for 1,400 years.
Aslan informs us that we cannot trust the Gospel of Mark--because it was written 40 years after Jesus’ death. He then chides us to trust his new book, written almost 2,000 years later.
I believe in Aslan’s right to hold and propagate any opinion. It’s a right that, ironically, Christians do not have in many Muslim countries.
My concern is that national media coverage be smart and forthright about this conflict of interest, just as it would be if I—a Christian author and pastor—wrote a book about Muhammad.   Pouring praise onto Zealot as new information about Jesus, without explaining its author’s devotion to a combatting religion, is blatant bias. This same bias would be unthinkable if the Christian and Muslim roles were reversed.
With its riveting demolition of Jesus, Zealot will continue to attract interviews—some from reporters who want to see Jesus deconstructed. Many more interviews will come from reporters who simply don’t understand that Reza Aslan has a horse in this race. He is not an objective observer, but, to use his own word, "a zealot," with religious motivation to destroy what Western culture has believed about its central figure for hundreds of years.
In many ways, this conflict is larger than Christianity and Islam. It is a conflict of Western and Middle Eastern foundations. These are great and important debates that we should welcome, but let’s be honest about our motivations, positions and conflicts of interest as we dialogue.
Let’s hope reporters in future interviews will, being informed, mention the glaring conflict of interest in this Islamic opinion of Jesus. It is no more objective than my educated views about Muhammad, as a Christian.
Zealot is not new work from a historian. It is a sophisticated presentation of views that Muslims have held about Jesus for more than 1,000 years.

My final thought:  "Zealot" is just the kind of book that the Enemy will use to spread his deception about the returning Messiah.  Wouldn't it be a master stroke of genius to use the words of a Muslim to fool Christians  into believing they have misunderstood Christ for the last 2,000 years?  Be on your guard, and do not become foolish!  Compare "Zealot" to our real authority, the Word of God!

1 John 4:1     "Beloved, do not believe every spirit, but test the spirits to see whether they are from God, for many false prophets have gone out into the world."