A Symbol Of America In Decline

I have to get this off my chest!  How did we, as a once God-fearing nation, get here?  How can a scumbag like Anthony Weiner even be considered worthy of running for political office?  I admit that I am editorializing and expressing my own opinion ... you are free to agree or disagree.  But what is wrong with America that this man is once again in the national spotlight?
The mayorship of New York City is arguably one of the most important positions of leadership in America; perhaps the world.  New York is a  global power city, and exerts a significant impact upon commerce, finance, media, art, fashion, research, technology, education, and entertainment.  It is (regrettably, in my opinion) the home of the United Nations Headquarters.  It is an important center for international diplomacy, and has been described as "the cultural capital of the world."  And, New Yorkers, you want this man to represent you? 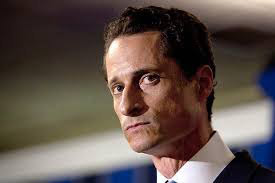 Do you really want him to make decisions for the 18.9 million people that make up the New York Metropolitan Area; or be in charge of the largest economical region and a $1.3 trillion-plus budget?  You might not realize it, but New York is a global hub of international business and commerce and is one of three "command centers" for the world economy (along with London and Tokyo).  How will Mr. Weiner find time to conduct the city's business, between his sexting and Twitter-ing?
What are you thinking, New York?  The man was forced to resign from Congress amid his shameful sexual exploits, and here it is, barely two years later, and you're ready to let him be in charge of your city, which controlled 40% of the world's finances by the end of 2008, making it the largest financial center in the world?
At the time that I am writing this blog, his poll numbers are dropping.  He has admitted to continued transgressions, and his politically convenient wife is standing by his side ... although several feet away from him, as if even she finds him too dirty to touch.  Perhaps by the time this is posted, he will have found enough humility to spare himself, his family, the proud city of New York, and our nation any further embarrassment.
But for me, this goes beyond embarrassment.  It reeks of shame.  I know that this is a rarely felt emotion in today's "tolerant" society.  But perhaps we should take a good look at this old-fashioned word.  Shame is a painful feeling of humiliation or distress caused by the consciousness of wrong or foolish behavior.  The problem with our culture today, is that we no longer want anyone to be humiliated, nor are we willing to pronounce any behavior wrong.  Our new mantra is TOLERANCE.
If Huma is willing to tolerate his atrocious behavior, who are we to pass judgment?  The problem with that line of thinking is that there are no boundaries.  His sexting partners are quite a bit younger than Anthony; the latest, only 22.  If society thinks this is Ok, then what is to prohibit him from trying to attract younger and younger girls?  And what does this tell our daughters and granddaughters?  That it is Ok to be used by powerful men for their cheap sex thrills?  And then to get your 15 minutes of fame on Inside Edition?
There was a time when such scandals would have been declared disgraceful and sinful, while silent and influential behind-the-scenes power brokers would have done everything in their authority to keep it quiet.  Now these same power brokers go on TV to defend such monsters and chastise the public for judging them.  Oh, what a wicked web we weave!

Ecclesiastes 12:13-14     "The end of the matter; all has been heard. Fear God and keep his commandments, for this is the whole duty of man. For God will bring every deed into judgment, with every secret thing, whether good or evil."
Posted by Pam Kohler at 7:00 AM