The Face of Courage

This weekend, PLW and I kind of escaped from reality and spent the last 48 hours visiting friends on their remote ranch .... no TV, cell phones or internet .... just fellowship in God's creation; enjoying long walks, sitting by their pool, and lots of in-depth discussion about our faith and the Truth being revealed to us.  It was refreshing, inspirational, and a great way to decompress.
So when we arrived home late yesterday afternoon, I find that our country (and the world) are on fire from the revelations of one man; the incredibly brave "whistleblower" at the National Security Agency.  I am incredibly blown away by the courage and the farsightedness of this 29-year-old government contract worker.   With considerable vision and preparedness, Edward Snowden knew that he had to sacrifice his own personal safety on the chance that the American people would respond to the frightening implications that he was about to reveal. 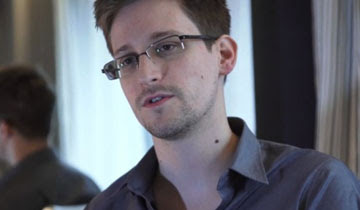 Through his extensive access to NSA tactics and techniques he was able to see an increasing pattern of State surveillance of private citizens, and the scope of the intrusion into our privacy horrified him.
He didn't sell State secrets to the highest bidder, nor did he set out to endanger anyone personally.  His motives were about the principles of freedom:  "I will be satisfied if the federation of secret law, unequal pardon and irresistible executive powers that rule the world that I love are revealed even for an instant."
When asked by the UK Guardian why he decided to take this bold step, he responded, "I don't want to live in a society that does these sort of things … I do not want to live in a world where everything I do and say is recorded. That is not something I am willing to support or live under."  And so he has essentially given up his own freedom to try and compel us to save ours.  What will we, the American people, do with the information he has provided?  Will he have jeopardized his own safety and that of his family and friends for nothing?  Will this story fade from the news cycles in three or four days; or will there be a sustained outcry against our loss of privacy?  "I really want the focus to be on these documents [not me] and the debate which I hope this will trigger among citizens around the globe about what kind of world we want to live in." He added: "My sole motive is to inform the public as to that which is done in their name and that which is done against them."
For now, he sits alone in a hotel room in Hong Kong, waiting for that knock on the door.  How will the long arm of the United States choose to punish him for delivering the truth?  They can threaten to prosecute him via the Espionage Act, or the Chinese government could simply work "a deal" with our State Department.  Whatever method they choose, Snowden does not expect due process, only decisive action.  "They say it is better to kick someone out of a plane than let these people have a day in court. It is an authoritarian mindset in general."
I know that the talking heads and the government will demonize this man.  He will be called a traitor, unAmerican, and worse.  But I can't imagine the courage it took for him to come to this decision; knowing that he may never see his family or home again.   Furthermore, I cannot imagine taking this step without seeking the counsel of the Holy Spirit and asking for spiritual protection.  Throughout his interview with The Guardian, there is no mention of God or faith, and I would think he would profess a relationship with Jesus, if it existed.  But I feel, without a doubt, that God is using this man to reveal the dangerous place in which this country finds itself.  Man's personal freedom is at stake; our God-given freedoms of thought, ideas and speech.  These are not granted by my government, nor do they need to be observed or overseen.  The only one I want to have access to my private thoughts and ideas is my Creator.
I will be anxious to see how this plays out, as more articles and interviews from Snowden become available.  From my vantage point, he played it smart by being open, honest and choosing to reveal his identity instead of hiding behind a cloak of secrecy.  What the world chooses to do with the information he has provided is anyone's guess at this moment in time.  But I believe that our very existence as a free people is at stake.  Did Edward Snowden ultimately do the right thing?  Were his actions in time and will they save our precious freedoms?
PLW put it in visual perspective for me:  It's as if we find ourselves in a sudden and threatening lightening storm.  We are in the middle of working on an important project on our computer and we realize that this storm is getting worse, and we are worried about losing this aspect of the project.  We decide to shut down the computer and initiate the steps to do so.  But while the operating system is going through it's time-consuming process of logging out, asking us if we want to save our document, taking us to the screen where we click on "shut down", there is a lightning strike just too darn close for comfort.  We decide we can't wait any longer for the computer system to work out its process, or take the chance that our computer is going to get fried by the next bolt of lightning.  So we pull the plug, losing the immediate file, in the hopes of saving the entire hard drive.
That's what Edward Snowden has done for us.  He realized that this storm is coming faster than anyone expected, and there isn't time for the "political process" to play itself out.  So he made the gutsy call to "pull the plug", so to speak; to sacrifice his own personal welfare in the hopes that we will save and protect our foundation of personal privacy and freedoms.  The questions remain .... do we recognize what is at stake, and will we pick up his mantle?  I pray that his sacrifice is not in vain.