Nothing New Under The Sun

For those of you who share my Biblical worldview, you will know why I am writing this post on this particular day.  For those who are new to this perspective, or outright reject it, then simply regard this as a history lesson.  In order to fully explore my premise, I must give you a bit of historical background.  You may wonder where I'm headed with all this, but stick it out, and I think you will connect the dots.
I was shocked when PLW pointed me to an article on the BBC News Magazine site, titled "The Greeks Who Worship The Ancient Gods."  I urge you to read the entire article, and I hope to be able to inform you of the deeper significance of what will be happening in Greece today.
In case you weren't aware, today, June 21st, is what is known as the Summer Solstice.  You may think that only means that it is the longest day of the year; when the tilt of the Earth's semi-axis is in the southern hemisphere and our planet is most inclined toward the sun.  But to followers of ancient religions, it is one of the most important days on their calendar.  And it just so happens that there is a segment of the population in Greece who worship the country's pre-Christian gods. 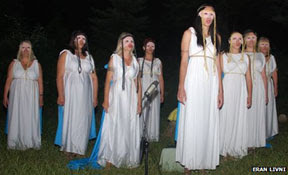 They dress up in togas with wreaths in their hair and by all outward appearances are a benign group.  But it is their willingness to embrace ancient religions that makes them so susceptible to the ancient deception.  In fact, this group states that their movement "is simply an acknowledgement of the gods, in the hope that the gods will help you."  So if they are simply paying homage to their history and cultural rituals -- why would I find that disturbing?
True, they are very likely unaware of what they are doing, but by bowing to the altars of Apollo, Zeus, etc., they are unwittingly bowing to the Satan-inspired spirit of Nimrod.  Ignorance of who you are worshipping plays right into Satan's hand.  These people have no idea of the fire they are playing with.  These gods are not just fables and fairy tales.  The worship of these entities is rooted in pagan worship of evil idols, which always leads right back to Satan's plan of deception.
But people are so hungry to connect; to identify with any group that promises renewal and rewards and a sense of "belonging".  It can start out being hopeful.  Just look at how Hitler was able to deceive the German people.  So, yes, you might think that this group celebrating the Summer Solstice is harmless, but I really think that if you open your mind, you can see this same scenario repeated from the beginning of time.  It starts out innocently, and then ..... "In the beginning, they were making jokes, then they were ignoring us, now they are interested," says tax manager Persis Argyros, who has been involved since the start of the movement. "We became too big to ignore."  And that is what worries me!

Deuteronomy 12:30-31    "Take care that you be not ensnared to follow them, after they have been destroyed before you, and that you do not inquire about their gods, saying, ‘How did these nations serve their gods?—that I also may do the same.’  You shall not worship the Lord your God in that way, for every abominable thing that the Lord hates they have done for their gods .... "

Email ThisBlogThis!Share to TwitterShare to FacebookShare to Pinterest
Labels: Christianity, Our Culture.