Are You Buying It?

Do you ever feel like you're living in a parallel universe?  The evidence is right there before our eyes .... scandals that involve illegal harassment by government agencies; personal freedoms and privacy can no longer be taken for granted; and the overwhelming sense that our leaders are flagrantly lying to us about covert activities.   We've managed to destabilize the Middle East with our ignorant foreign policy and give away our national sovereignty to the UN.  Yet there are those of my fellow Americans who think nothing has changed; we're still rocking along in the "land of opportunity" and believing that the American dream is still alive. 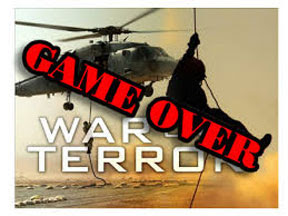 There are those who have no clue of the threats we face, right here in the homeland.  We are being told that we've won the War on Terror, yet I'm pretty sure that the folks in Boston and London aren't feeling like it's time to celebrate just yet.  In fact, there was a little publicized event right here in Texas over the past few days.
It seems that an active Hezbollah member had easy access to Fort Sam Houston, where he allegedly failed to disclose his association with the terror group when he applied for a security clearance with the Defense Department (where he was seeking a contracting job).  Wissam Allouche was seen by at least two people at Fort Sam dressed in U.S. military uniform displaying insignias from special forces, in an apparent attempt to fraternize with women soldiers and gain information.  An undercover terrorist unit obtained eight photos from a source showing Allouche during his days with Hezbollah. In them, he's holding assault rifles or rocket propelled grenades, and according to an Army Criminal Investigations agent, was given at least three aliases; one of which meant "god of death".
But this is the scariest part:  he has lived in the U.S. since 2002, and once owned a local gas station in the suburbs of San Antonio.  I don't want to imply that all Middle Easterners who own businesses in the U.S. have terrorist ties, but I'm also not so naive as to think this is a solitary case.  The War on Terror is over?  Somehow I don't think the end can be implied if only one side declares it.  Just saying it, doesn't make it so!
Does anyone besides me fear that we are sitting on a ticking time bomb?  No matter how often the Administration says our borders "are safer than they've ever been", I know for a fact that more than impoverished Mexicans looking for a better life are slipping across our borders.  The South Texas border is a virtual war zone; with beheadings, drug cartel murders, and Islamic jihadist literature as evidence of just how much terror still reigns.
I have had personal conversations with friends and acquaintances who recount their experiences of coming upon unidentified groups of armed men who have shot at innocent citizens, busted through locked gates and terrorized communities.  When calling local law enforcement for help, there have been incidences of blackhawk helicopters swooping in, dispensing with the bad guys, and mopping up the evidence ... no one hears another word about it; and you will certainly never hear it on your national news.
So while recent polls by Gallup, ABC News and CNN report that one-third of our population thinks everything is OK in the country and that we are "on the right track", I can't help but see the handwriting on the wall.  We know that things are unraveling, both politically and spiritually.  The problems we have in this nation cannot be solved with a Special Prosecutor investigating political scandals, or by appeasing our enemies, or even by solving our economic woes.  And both spiritual and virtual enemies are just waiting for their chance to strike.  All these things are the natural consequences of losing our way.
I know that we need to return to a reverence for family, faith and personal responsibility.  But I fear that we've allowed our civilization to deteriorate to the point that fewer people recognize the value of these precepts.  And in the meantime Evil has taken hold of the world and we're in the midst of a battle for our very souls.
I can't escape the universe I live in, but I can damn sure decide to live by my own standards.  I won't be deceived by slick public relations, the culture's latest "must have", or false promises of security.  If that means my world becomes smaller and more selective, then so be it.  I'd rather suffer for staying true to my God-instilled principles, than gain one moment of this world's false hope.

Psalm 73:25    "Whom have I in heaven but you? And there is nothing on earth that I desire besides you."

Email ThisBlogThis!Share to TwitterShare to FacebookShare to Pinterest
Labels: Liberty and Freedom, Terrorism