The Picture of Perfection

The snapshot showed her cute little nose, and the outline of her pouty lips.  And the daintiness of her ten tiny fingers was simply adorable.  She was curled up, and sleeping, and had to be woken so that her picture could be taken.  Seeing the images on the screen made my heart full of love for this tiny 20-week being that will soon be my grand-niece Elizabeth Morgan.
As I sat and watched the sonogram images flash on the screen, I could see the different lobes of her brain, and the outline of her ribs and spinal cord.  How could there be any doubt that this is a living human being?  The majesty and beauty of God's creation was evident on that screen and when the image of her tiny, beating heart appeared, I caught my breath!  She is wonderfully and beautifully made! 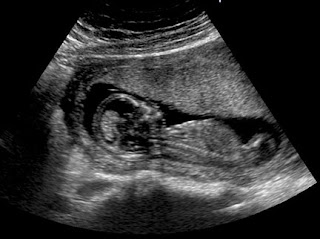 Which breaks my heart for all the millions of God's children who were created and never allowed to live.  It makes me incredibly sad that our culture has successfully rationalized abortion and put blinders on to the reality of this horrific sin.  As long as people can convince themselves that it is only "cells and tissue", then somehow we have been able to live with ourselves.  But the murder trial of Kermit Gosnell has pulled the curtain aside, and now no one can deny these are real babies; living, breathing, moving, feeling human beings!
If you can stomach it, you should read the transcripts of the trial.  When you read what was done to babies the same age as Elizabeth Morgan, it will literally make you sick.  Barbaric murder is what it is!  And witnesses describe that these babies cried, felt pain and struggled for life.  I know that our God is a forgiving and just God, but I honestly can't fathom a repentance that would cover these atrocities.  It's a good thing this doctor will have to stand before God's judgment seat and not mine!
It shouldn't come as a surprise that there are already those who are saying this is an aberration of the abortion process; that this is just a departure of the accepted standard; that Gosnell's actions are not typical of your "average" abortion.  Do not let the truth be buried!  There are powerful people throughout our society and the Government that do not want to hinder the availability of abortion.  In fact, during the Gosnell trial, we have the testimony of government officials admitting they ignored repeated complaints about Gosnell because they didn't want to limit access to abortion.
And guess what the advocates for abortion rights think is the solution to monsters like Gosnell?  More regulations, of course!  It's just like the guns right issue --- more laws on the books will guarantee our safety, right?  Well, the Gosnell trial has highlighted the awful realization that the current laws are ignored and many abortion clinics pretty much operate inspection-free.  So are more laws going to change the fate of the more than 1,000,000 babies that are expected to be aborted this year?  Will they be spared the brutal deaths that occur in the 724 clinics across our nation?  Or will the Institution of Abortion continue to be more important than individual lives?
I know that here in Texas, that a woman seeking an abortion is required to receive a sonogram from the doctor who will be performing the procedure at least 24 hours before the abortion. During the sonogram, the doctor is required to display sonogram images and make the heartbeat audible to the patient.  There are those who will dispute this law on the grounds that it is an "undue burden" on a woman's abortion rights.  But what about the baby's rights?
I also realize that I view the abortion issue through the lens of my faith, while others see it from a "womens rights" position.   The term "with child" occurs twenty-six times in the Bible. The term "with fetus" doesn't occur once.  So I'm pretty sure that we will never come to an agreement.  But I can tell you this .... at 20 weeks, Elizabeth Morgan is more than cells and tissue; she is a perfect manifestation of God himself, and proof that He exists.  Who else could create such a beautiful and complex display of His own Awesomeness?

Jeremiah 1:5     "Before I formed you in the womb I knew you, before you were born I set you apart;"